Before becoming president, Donald Trump criticized Barack Obama's administration for hiring someone with no medical professional experience to respond to a virus outbreak.

Shortly after United States President Donald Trump announced on February 26 2020 that he was naming Vice President Mike Pence to lead his administration’s response to the issue of novel coronavirus COVID-19, critics on social media pointed out yet another instance of Trump lashing out against his predecessor Barack Obama in similar circumstances.

Trump claimed during a press conference that “the risk to the American people remains very low” in connection to the virus, once again contradicting officials from the Centers for Disease Control and the federal Department of Health and Human Services (HHS) who had warned lawmakers that an outbreak in the U.S. was inevitable.

According to CNN, Trump was frustrated with HHS Secretary Alex Azar for reportedly not updating him enough regarding the virus, which as of February 26 2020 has infected 80,000 people in at least 37 countries. The virus, also known as COVID-19, has been blamed for 2,600 deaths worldwide.

“Mike will be working with the professionals, doctors and everybody else that is working,” Trump said in naming Pence as his administration’s point person. “The team is brilliant. I spent a lot of time with the team the last couple weeks. But they are brilliant and we’re doing really well and Mike is going to be in charge and Mike will report back to me. But he has a certain talent for this.”

However, he did not call Pence the administration’s coronavirus “czar.” Pence, a former radio talk show host, has no medical experience. During his tenure as governor of Indiana, Pence was criticized for his initial response to an HIV outbreak in the state in 2015, when he refused to take the advice of local and state health officials and allow for needle exchange programs to be implemented to stop the spread of the disease.

In October 2014, though, Trump took issue when then-United States President Barack Obama named another non-medical professional in Ron Klain, who had served as chief of staff for Vice Presidents Joe Biden and Al Gore, to lead his administration’s response to the burgeoning Ebola outbreak at the time. Klain was tasked to report to then-National Security Advisor Susan Rice and homeland security advisor Lisa Monaco. 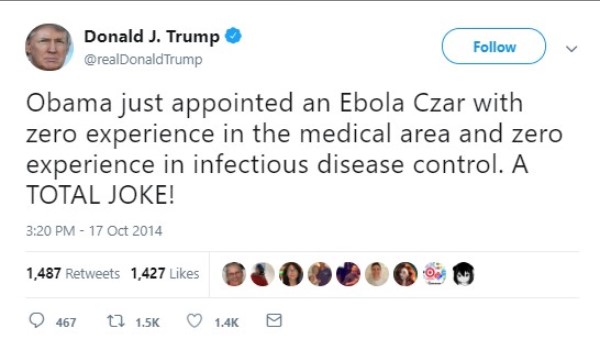 Of the 57 documented COVID-19 infections affecting Americans, 40 of them are connected to a quarantined American Diamond Princess cruise ship in Japan. Democratic lawmakers are reportedly set to request $8.5 billion in emergency funding to fight the disease.

“We’ll spend whatever is appropriate,” Trump said before once again downplaying the outbreak. “Hopefully we won’t have to spend so much because we really think that we’ve done a great job in keeping it down to a minimum.”