Obama resettled 70,000 Somalians to MN. They elected Omar. Planned?
You bet it was.

As it turned out, the claim was nowhere near new, and in fact is a mishmash of several other thoroughly disproven rumors. An iteration shared to “Taking Back America” on February 17 2019 (archived here) featured a heavily altered image of former U.S. President Barack Obama with dark circles added under his eyes: 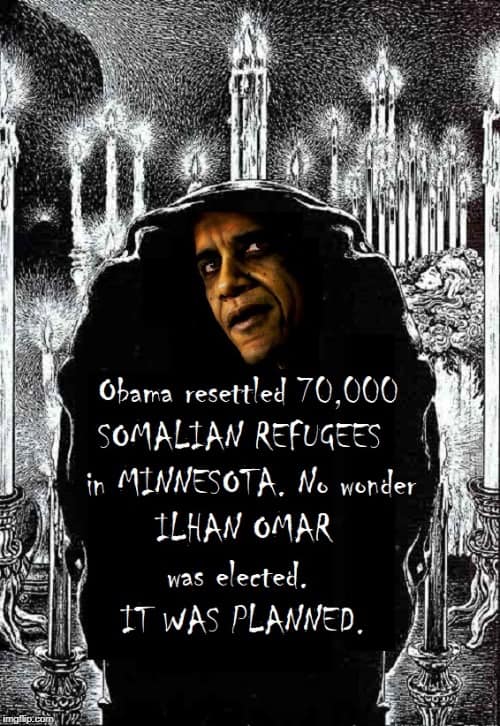 Obama resettled 70,000 SOMALIAN REFUGEES in MINNESOTA. No wonder ILHAN OMAR was elected. IT WAS PLANNED.

If the subtext wasn’t clear enough, the meme said that President Obama purposely relocated tens of thousands (70,000 in total) refugees from Somalia in Minnesota, apparently with the specific intent of installing Somalia-born politician Ilhan Omar in Congress. (Incidentally, Omar harshly criticized Obama in March 2019, saying “we don’t want anybody to get away with murder because they are polished” and “we want to recognize the actual policies that are behind the pretty face and the smile.”)

That number is wrong. In fact, it’s larger than the total number of Somali refugees resettled throughout the entire U.S. under Obama.

Moreover, the Minnesota Department of Health reports that between 1979 and 2017, there were a total of 23,915 refugees who arrived in Minnesota from Somalia.

Some refugees who resettle in one state may move to another; Minnesota received a reported 3,740 “secondary arrivals” from other states between 2010 to 2016. And Minnesota’s Health Department notes that “there is no systematic way to identify all secondary refugees migrating to Minnesota,” so that number doesn’t account for movements not reported to the state.

Refugees must wait five years after settlement in the United States before applying for citizenship, itself a lengthy process; if approved, then, and only then, can they legally vote. Refugees settled in Minnesota or elsewhere during Obama’s presidency were not yet likely eligible to vote for Omar — or any other candidate — when this meme first appeared.

Even if the meme was accurate, which it is not, Omar defeated her opponent by a massive margin according to Ballotpedia, receiving 267,703 votes to her Republican challenger’s 74,440. The other candidate’s shortfall was more than 193,000 votes, well short of the purported 70,000 votes gained in the nonexistent strategic placement of refugees.

According to the meme, President Obama specifically located 70,000 Somali refugees in what would later become Ilhan Omar’s district, in a long-ranging conspiracy to elect Omar to office. In fact, just over 6,000 Somali refugees relocated to Minnesota during Obama’s two terms, and just under 24,000 Somali refugees were placed in Minnesota between 1979 and 2017. A large number of refugees settled during the Obama administration were not yet likely eligible to vote, and Omar defeated her opponent in a landslide of well over a 70,000 vote spread.