The Supreme Court (SCOTUS) ruled President Trump has the authority to "remove" Sen. Chuck Schumer from the Senate.

One iteration was shared to the group “People for the secession of Upstate New York from the downstate region” on April 7 2020: 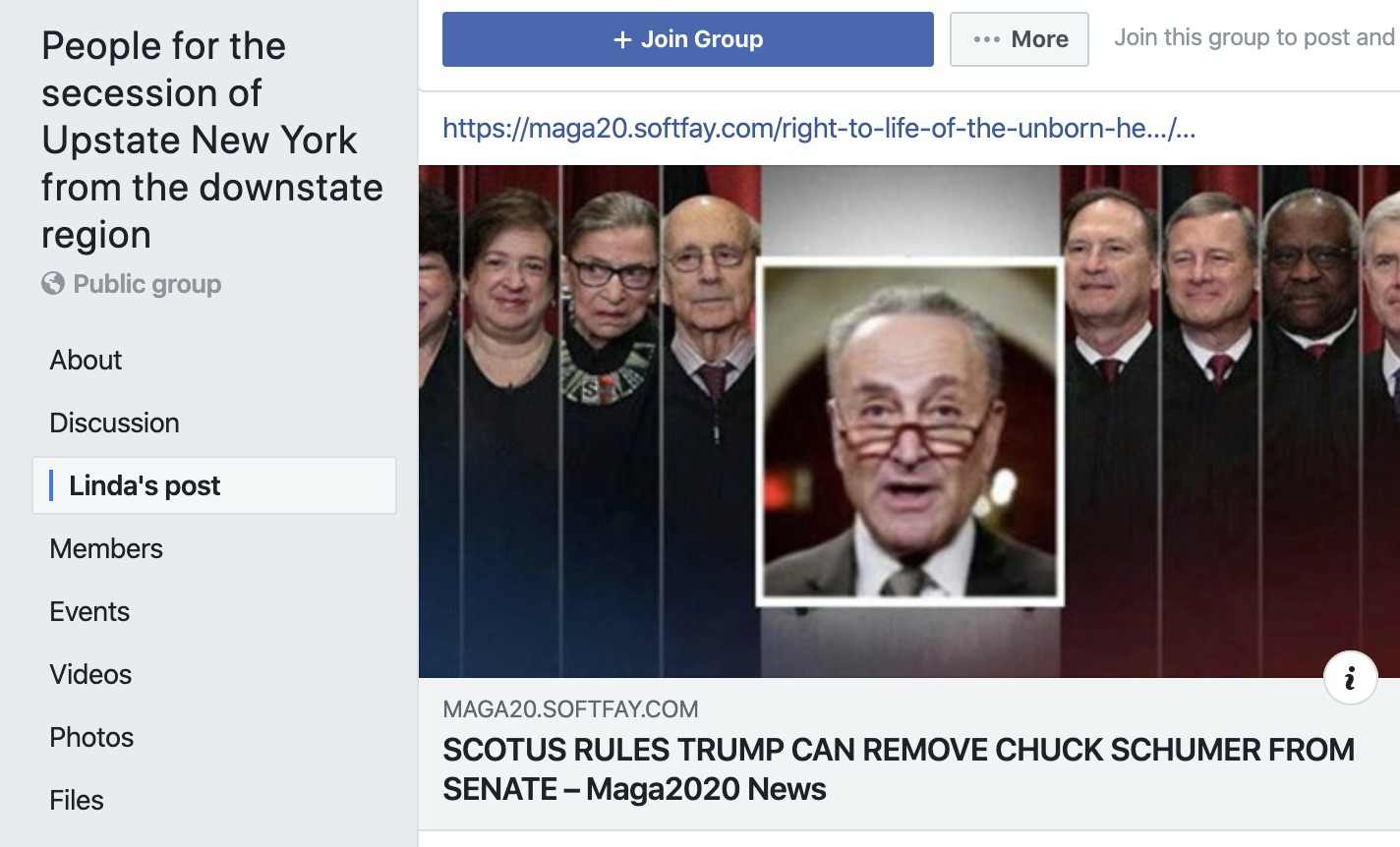 Chuck Schumer made a tremendous mistake when he took his pro-abortion stance too far by threatening members of the Supreme Court. When he shouted that Justices Kavanaugh and Gorsuch would “regret it” if they pushed through their god-fearing and moral position on the right to life of the unborn, he opened up a can of worms that cannot be closed … In a 7-2 decision, the Supreme Court has ruled in favor of making use of Article 6, Section C3-P0 to allow the President the opportunity to legally remove Senator Schumer from office for his terroristic statements. The Article reads as follows:

“The Supreme Court remains an independent judicial body, outside the influence of government at any level. Should any government official take it upon himself to attempt to influence, coerce, intimidate, or threaten a Supreme Court Justice in order to sway decisions, that official shall be subject to discretionary removal at the hands of the sitting President of these United States.”

However, that item was a direct copy of a March 10 2020 post to BustaTroll.org, one of several sites in the “America’s Last Line of Defense” cluster of sites that publishes nothing but satire, hoaxes, and jokes. An “about” page on that site explained:

ABOUT US
BustaTroll.org is a subsidiary of the “America’s Last Line of Defense” network of parody, satire, and tomfoolery, or as Snopes called it before they lost their war on satire: Junk News

About Satire
Before you complain and decide satire is synonymous with “comedy”:

sat·ire ˈsaˌtī(ə)r noun: The use of humor, irony, exaggeration, OR ridicule to expose and criticize people’s stupidity or vices, particularly in the context of contemporary politics and other topical issues.

Everything on this website is fiction. It is not a lie and it is not fake news because it is not real. If you believe that it is real, you should have your head examined. Any similarities between this site’s pure fantasy and actual people, places, and events are purely coincidental and all images should be considered altered and satirical. See above if you’re still having an issue with that satire thing.

It’s not uncommon for scraper sites to copy and paste content like Last Line of Defense (LLOD)’s “SCOTUS Rules Trump Can Remove Chuck Schumer from Senate” word for word, including all but a disclaimer that the content was originally intended as satire.