During a weeks-long shutdown, taxpayers paid for President Donald Trump and his family to dine at a restaurant at one of his properties. 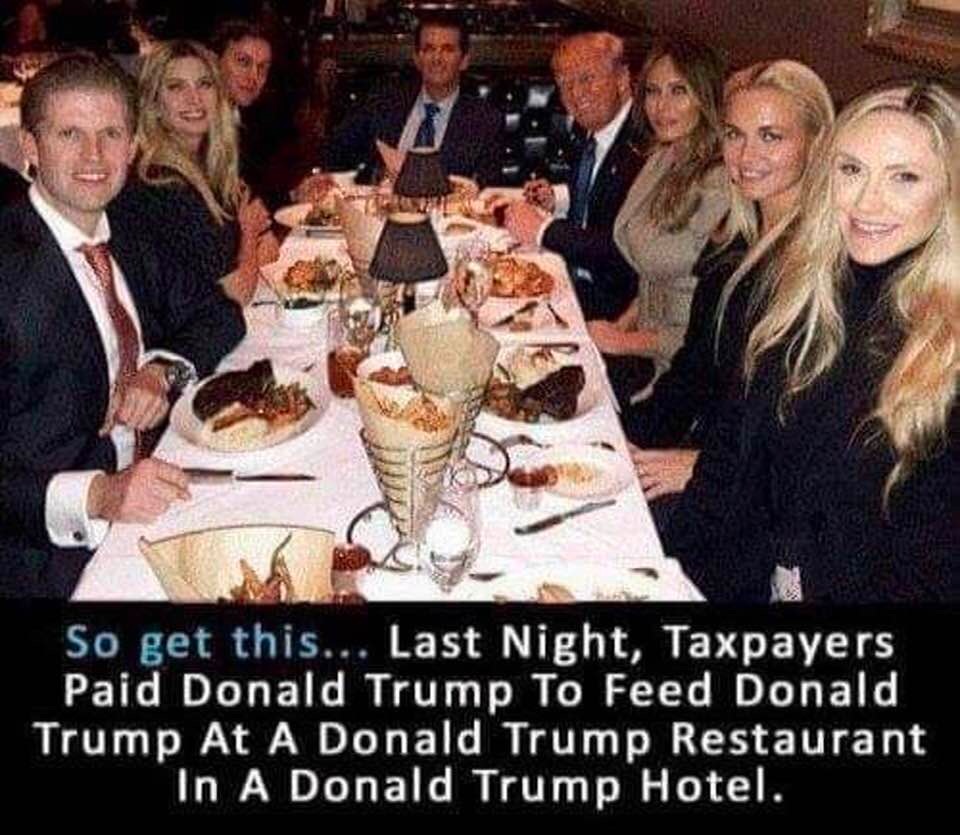 Beneath a photograph of Donald Trump, his children, and their spouses, text stated:

The individual who posted the meme added commentary related to the weeks-long shutdown, during which furloughed federal workers went without pay:

Government shutdown hurts everybody… forces Trump family to eat out… at Trump hotel… paid by taxpayers… Why weren’t the other 800,000 folks invited?

(Note: This is an old pic… nothing to do with current situation… only used to illustrate a valid point… Out of touch with reality!)

In fairness to the meme’s sharer, an added note labeled the photograph as old. But the claim an “old pic” was “only used to illustrate a valid point” suggested that the included claim was novel — and that on the night of January 23 2019, President Trump’s extended family dined at a Trump hotel’s restaurant on the taxpayer’s dime.

The photograph used to illustrate the claim was originally shared to Instagram by Ivanka Trump on February 8, 2016. It was captioned:

Enjoyed a wonderful family dinner tonight in New Hampshire. What a great way to end an exciting day!

Immediately, some of the meme’s points were in dispute. The image was captured in February 2016, well before Trump was elected in November of that year. Also, we were unable to locate either a Trump-owned hotel or a Trump-owned restaurant in the state of New Hampshire. Again, the photograph was labeled as representing a “valid point,” but the validity of said point seemed to inch further away as we looked closer at the image.

So far, we have a photograph taken before Trump became United States President, in which taxpayers were not treating his extended family to dinner, which was not taken during or immediately before the shutdown, and was not captured in a Trump restaurant or a Trump hotel. But was the meme itself recent when it was posted?

Apparently not. A reverse image search for that photograph returned a result crawled in March 2017, once again well before the shutdown was a possibility: 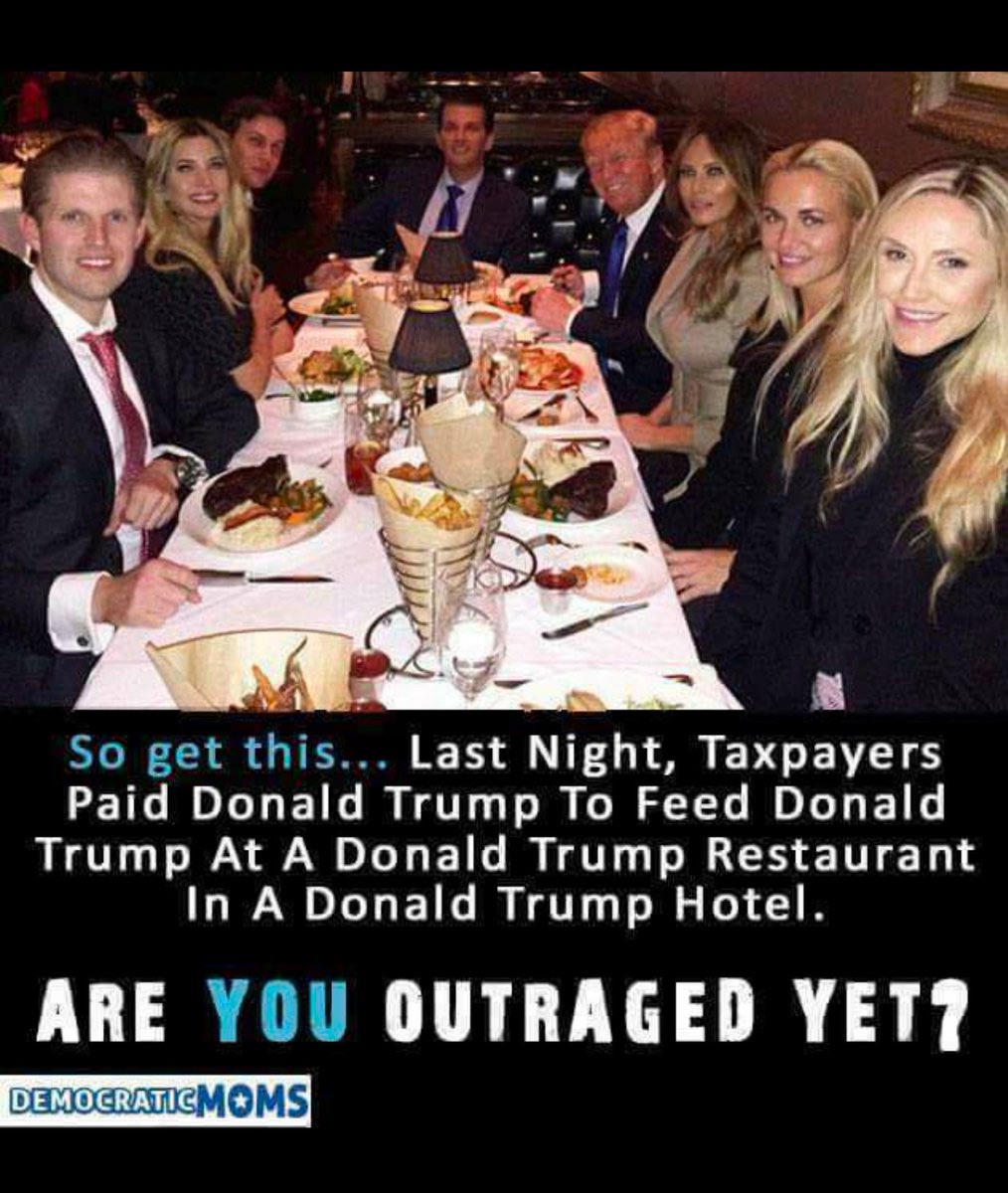 Although the poster placed the commentary of the image in the context of federal shutdown painful to furloughed workers, the sentiment of the meme existed almost two years prior. But is there any truth to the claim that President Trump and his children attended a taxpayer-funded dinner at one of his hotel restaurants on January 23?

We were unable to locate any information suggesting that the President did go out to dinner at a Trump property or any other venue on that date. The Twitter account @POTUS_Schedule tweeted at 5:38 PM:

17:30 – No #POTUS travel outside the #WhiteHouse secure area expected for the remainder of today & tonight

But was it true at least that taxpayers funded President Trump’s excursions to private restaurants? According to information from previous administrations, that responsibility fell on President Trump himself:

During the meal, restaurant staff who aren’t directly serving the president are kept at a distance. Those who are allowed to approach him get little pins to wear on their lapels that signify to the Secret Service that they have been cleared.

Who pays? That varies. At Lincoln and Boundary Road, Obama’s campaign paid to rent out the entire restaurant space. When he’s not eating out for his re-election bid, the president personally gets the tab.

Former First Lady Laura Bush confirmed that the costs were covered by the Presidential household:

Former first lady Laura Bush wrote in her post-White House memoir that she was expected to pick up the tab for every meal she ate at the White House or the presidential Camp David retreat — for her husband’s two terms.

“The presidential room, as it were, is covered, but not the board,” she wrote in her book, “Spoken from the Heart.”

While first families aren’t responsible for utility bills or a mortgage, “it is more than fair that they pay for personal items like every American household.”

The issue was addressed in an article called “Secrets of the White House Kitchen” in 2018:

The President Pays for His Own Food

There’s no need to worry, taxpayers! You aren’t paying for the president’s daily dinners and midday snacks. At the end of every month, the first family is given a grocery bill and must pay the tab themselves.

To recap, the image was from February 2016, the photograph did not in fact show Trump dining while President (much less during a government shutdown that took place at his behest), it was not taken at a Trump hotel, and it was not taken at a Trump restaurant. And had President Trump dined out during the shutdown (at one of his properties or elsewhere), he would be financially responsible for that cost.