A photograph shows Roger Stone's neighbor wearing a fur coat and sipping wine as he was arrested.

On January 25 2019, the Facebook page “Make ‘Murica Great Again” shared the following photograph of a smiling woman clad in a fur coat and drinking wine, purportedly a neighbor of Roger Stone toasting his arrest during a raid by Federal Bureau of Investigation agents: 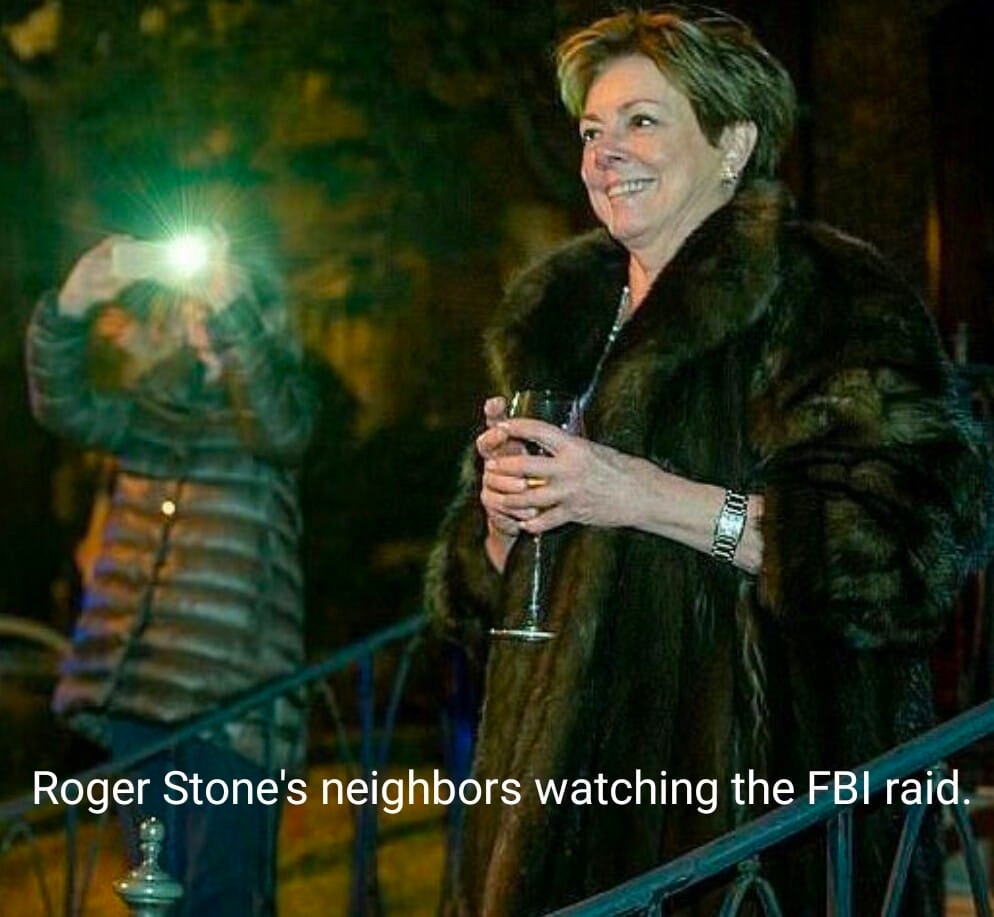 The original was shared on the day Stone’s Florida home was raided by the Federal Bureau of Investigation (FBI), alongside a caption (“Bwhahaha!”), and read:

Comments on the image suggested that many social media users took its claims at face value:

She is drinking wine in a fur coat at 6am? I need to befriend this woman!

I love it. She was sleeping. .. heard a noise, got up..it is col d..puts on fur, sees what is going on. ..goes and cracks open champagne. .for everyone. ..
I am so content

However, at least one reader recognized the photograph — and pointed out that it was not, in fact, taken during the early-morning raid of Stone’s residence in January 2019. It is a real photograph and the description was not as far off the mark as it might have been.

The image shows neighbor Dianne Bruce, and it originally appeared in April 2017 articles such as this piece from The Cut, “Ivanka Trump’s Neighbor Watched People Protest Her While Sipping a Glass of Wine”:

The First Daughter might not have been there, but the Daily Mail captured Dianne Bruce — who lives across the street from Ivanka and Jared — watching the whole thing from her front steps while bundled in fur, sipping a glass of white wine, and wearing a serene smile.

Maybe she believes in climate science, or maybe she just wants her parking spot back.

The story reported on protests outside a Washington, D.C. residence of First Daughter Ivanka Trump and husband Jared Kushner, a “dance party” arranged by LGBTQ activists.

“It was the entertainment for Saturday night,” she told TIME, explaining that she threw on the outerwear because it was chilly, thinking nothing of it. “A neighbor had a couple of glasses of wine, and we were standing so they gave us one as neighbors do, and at the end I gave her back her glass.”

Bruce views the demonstration as par for the course in the political capital. She was not, as some of Trump’s detractors suspected, enjoying some schadenfreude about protests of her neighbor.

“People are reading into it as a statement,” she said. “For me, it was people who had something to say, and saying it the way we do in America, with a peaceful march.”

The photograph was taken nearly two years prior to and several states away from the FBI raid of Roger Stone’s house, and it was during a protest (not a law enforcement action) with a celebratory atmosphere.