The designer of the "Confederate flag" said it was a symbol of white supremacy.

In September 2019, a July 2015 blog post circulated on Facebook, bearing the headline: “Confederate Flag Designer Said It Is A Symbol Of White Supremacy — Not Southern Heritage.”

When rendered on Facebook, the link prominently displayed a quote meme, which is likely what drove the shares: 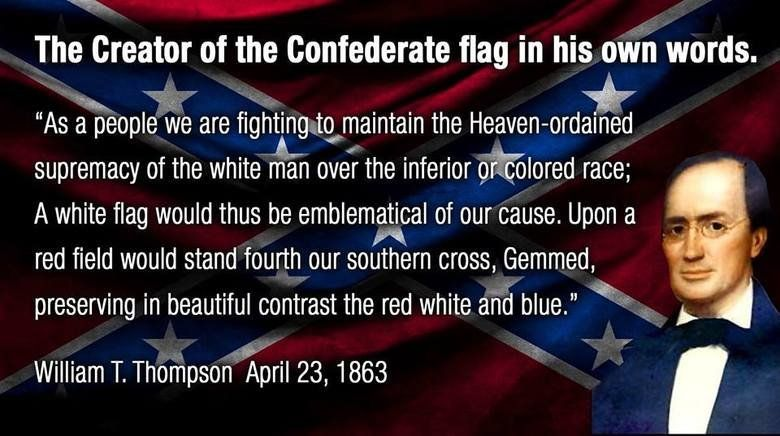 Against the backdrop of a widely-recognized (and still common) Confederate flag and a portrait of a bespectacled man, white text read:

The Creator of the Confederate flag in his own words.

“As a people we are fighting to maintain the Heaven-ordained supremacy of the white man over the inferior or colored race; A white flag would this be emblematical of our cause. Upon a red field would stand fourth our southern cross, Gemmed, preserving in beautiful contrast the red white and blue.”

An attached item repeated the quote, and claimed:

The white supremacist who designed the Confederacy’s flag(s), one William T. Thompson, gave the definitive reason why every Republican, KKK member, and so-called Southern heritage advocate still supports flying that symbol of treason and racism. Thompson was proud to admit that “As a people we are fighting to maintain the heavenly ordained supremacy of the white man over the inferior or colored race; a white flag would thus be emblematical of our cause. Such a flag would be a suitable emblem of our young confederacy, and sustained by the brave hearts and strong arms of the south, it would soon take rank among the proudest ensigns of the nations, and be hailed by the civilized world as THE WHITE MAN’S FLAG.”

Many Americans of all races today refer to any of the Confederacy’s flags as “the white supremacist’s flag” and they would not have been wrong during the Civil War and they are certainly not wrong in the 21st Century. When the racist flag’s defenders claim it is just an innocent symbol of their Southern heritage and culture, they are defending the white supremacy they know the flag symbolized during the Civil War continuing to the present. It is part of the Southern culture, and their beloved heritage, they have learned all their lives and likely studied in history classes.

The claim, then, came in two parts: That Thompson designed the Confederate flag depicted in the meme, and that the quote was his.

The Confederacy had three successive flags in its active years between 1861 and 1865. The second of the three, partially featuring the “x” and called the “Stainless Banner,” was bookended by a first iteration (resembling the American flag of the time but with fewer “bars”) and a third (featuring the second design along with vertical wide stripes of red and white). The flag used in the meme, a blue “x” shape with white stars against a red background, was never the Confederacy’s official flag — it was a battle flag used in part on the last two flags.

Throughout the Confederacy’s contentious existence, ongoing talks endeavored to settle on a flag universally appealing to confederates, with its initial flag raising objections it mirrored the Union’s too closely. Historically, the “Confederacy’s rejection of the Stars and Bars” (the first flag) led to the rise of an emblem featuring a battle flag:

“Every body wants a new Confederate flag,” wrote George Bagby, editor of The Southern Literary Messenger, in January 1862. “The present one is universally hated. It resembles the Yankee flag and that is enough to make it unutterably detestable.” The editor of the Charleston Mercury echoed Bagby in his criticism and in his solution: “It seems to be generally agreed that the ‘Stars and Bars’ will never do for us. They resemble too closely the dishonored Flag of Yankee Doodle … we imagine that the Battle Flag will become the Southern Flag by popular acclaim.” As early as April 1861, critics denounced the Stars and Bars as a “servile imitation” and a “detested parody” of the Stars and Stripes.

A handful of contemporaries linked the new flag design to the “peculiar institution” that was at the heart of the South’s economy, social system and polity: slavery. Bagby characterized the flag motif as the “Southern Cross” — the constellation, not a religious symbol — and hailed it for pointing “the destiny of the Southern master and his African slave” southward to “the banks of the Amazon,” a reference to the desire among many Southerners to expand Confederate territory into Latin America. In contrast, the editor of the Savannah, Ga., Morning News focused on the white field on which the Southern Cross was emblazoned. “As a people, we are fighting to maintain the heaven-ordained supremacy of the white man over the inferior or colored races. A White Flag would be thus emblematical of our cause.” He dubbed the new flag “the White Man’s Flag,” a sobriquet that never gained traction.

The Confederacy’s rejection of the Stars and Bars as its national flag and embrace of the battle flag as the central emblem of its “confirmed independence” continues to have great significance today. With the adoption of the “Stainless Banner” in 1863, the battle flag became more than a soldier’s flag; it became a political flag, associated with the Confederate government, nation and cause.

In the 2013 New York Times opinion piece excerpted above, Thompson’s name does not appear and no credit is given to a person or group for creating the “Stainless Banner” iteration. The battle flag alone — the imagery seen in the meme and commonly in modern discussion of the “Confederate flag” — was only used in battle in that form.

Its design was credited largely to William Porcher Miles, not to Thompson (although Google users will see Thompson credited as a highlighted result):

The Confederate battle flag was never the official flag of the Confederacy.

The Confederate States of America went through three different flags during the Civil War, but the battle flag wasn’t one of them. Instead, the flag that most people associate with the Confederacy was the battle flag of Gen. Robert E. Lee’s Army of Northern Virginia.

Designed by the Confederate politician William Porcher Miles, the flag was rejected for use as the Confederacy’s official emblem, although it was incorporated into the two later flags as a canton. It only came to be the flag most prominently associated with the Confederacy after the South lost the war.

As for the quote, it is correctly attributed to William Tappan Thompson, a confederate and founder of the newspaper that would become the Savannah Morning News. The meme and its appended article provided two different quotes attributed to Thompson. The first, with the variable portions in bold:

As a people we are fighting to maintain the Heaven-ordained supremacy of the white man over the inferior or colored race; a white flag would thus be emblematic of our cause. Upon a red field would stand [forth] our southern cross, gemmed, preserving in beautiful contrast the red, white, and blue.

As a people we are fighting to maintain the heavenly ordained supremacy of the white man over the inferior or colored race; a white flag would thus be emblematical of our cause. Such a flag would be a suitable emblem of our young confederacy, and sustained by the brave hearts and strong arms of the south, it would soon take rank among the proudest ensigns of the nations, and be hailed by the civilized world as THE WHITE MAN’S FLAG.

Thompson did write the first version (on the meme) in a series of editorials published in the Savannah Morning News in April 1863, amid debate around adoption of the second emblem, a white banner with the commonly-seen blue cross on a red background. An excerpt of Thompson’s April 1863 editorial was excerpted in the 1872 book Our Flag: Origin And Progress Of The Flag Of The United States Of America. The excerpt begins on page 416 and continues on to page 417, but the bolded portion of the second quote, including the “white man’s flag” part, doesn’t appear until page 418.

Finally, the title of the article attached to the meme circulating on Facebook contained a claim that the Confederate flag’s designer had explicitly stated it was a “symbol of white supremacy” and “not Southern heritage.” That phrasing referenced defenses of the symbol used in the 2010s, also known as the “heritage not hate” claim. “Heritage not hate” was a decidedly modern aspect of debates over the legacy of the symbol, unlikely to have been referenced during the Confederacy’s existence. During the Civil War, confederates did not see the flag as their “heritage,” since at that point it was a current event.

Overall, the article and meme contain some historical facts, but presented them without necessary context. William Tappan Thompson wrote about Confederate flag design in a series of editorials opining on its various iterations, and the quotes used are cobbled together from his April 1863 writings. The article at the end of the meme includes a variation of the quote in the image. The person most commonly credited with adoption of the Confederate battle flag in the “Stainless Banner” second iteration is William Porcher Miles, who did not write the “white man’s flag” editorial. Without the proper context, the meme and article are accurate, but misleading. We rate this claim Decontextualized.