A meme claiming that popular animated series "The Simpsons" predicted Greta Thunberg includes authentic and unaltered imagery from from the show, with Lisa Simpson glaring at Donald Trump.

There is a common, cyclical rumor that animated comedy series The Simpsons — which began its run in 1989 — has predicted numerous events to come. In September 2019, one such iteration claimed that climate crisis activist Greta Thunberg was among future possibilities divined by the animated series many years before.

A September 26 2019 post to Reddit’s r/memes, “Simpsons predicted it yet again,” depicts Greta Thunberg seemingly glaring at President Donald Trump. To the left of that image is a purported screenshot of Lisa Simpson glaring at Trump:

Simpsons predicted it yet again from memes

Underneath the side-by-side photos of Thunberg/Trump and Lisa Simpson/Trump is an image of Thunberg (angrily addressing the United Nations Climate Action Summit), then a photograph of Lisa in front of a curtain, and finally, a Simpsons newspaper reading “Springfield Cleans Up Act” and “Pushy Kid Nags Town.” An earlier iteration of the meme lacked the central image in which Lisa Simpson purportedly mirrors Greta Thunberg glaring at Trump:

Simpsons predicted even this from funny

Outside the context of the claim, the meme might not make much sense, as it relies on readers’ knowledge that the Simpsons have already “predicted” numerous circumstances. A similar rumor circulated after a fire damaged the Notre Dame cathedral, but it was misleadingly arranged to create an impression that the show’s powers of prognostication were stronger than they were. By 2013, the meme spawned a BuzzFeed listicle about 21 purported predictions made by the series.

A related meme is simply “Simpsons Did It,” an old internet aphorism which broadly holds that “an idea widely perceived as original or new that may have been already portrayed in an episode of the long-running American animated TV sitcom The Simpsons” (an idea that itself originated on South Park.)

One of the ways in which the meme survives is its reliance on an immeasurably large back-catalog of The Simpsons content, which is so detailed that all but a few die-hard fans are familiar with every single aspect of the show and related media. At least one element of the meme, the newspaper, originated in the 2007 animated film The Simpsons and a plotline involving Homer’s job at the power plant and the Environmental Protection Agency (EPA)’s involvement with a pollution scandal in Springfield.

In the film, Lisa attempts to get signatures for a petition to clean up a Springfield lake, and eventually co-hosts a presentation with a boy. That presentation is called “An Irritating Truth,” a reference to Al Gore’s An Inconvenient Truth:

Meanwhile, while Lisa tries to get signatures for a petition to clean up Lake Springfield (unsuccessfully). She meets an Irish boy named Colin, who is also has a petition for the same cause … Lisa and Colin combine their efforts to give a presentation called “An Irritating Truth” at Town Hall. But because the average Springfielder could care less about the environment, and namely seemed to miss the overall point anyways, such as when she accidentally focused on her crush on Colin and when her moving platform briefly malfunctioned before she could get it to the height needed to demonstrate her point, she reveals that she put the lake water in their drinking glasses, causing everyone to spit out the water they just drank. When Lisa’s tactic is successful, Moe suggests to the town that they hate kids, but Mayor Quimby finally gets to Lisa’s point and forbids any more dumping, declaring a state of emergency.

Later portions of the film do involve a celebrity president — but not Donald Trump. Another element of the film relates to the EPA’s decision to wall Springfield off due to its pollution:

Russ Cargill, head of the EPA, tells President Schwarzenegger that Springfield is so polluted that the government must take drastic action. He provides Schwarzenegger with five options and he picks option 3 at random without looking, saying he was elected to “lead, not to read”. Option 3 means trapping the entire town of Springfield under a gigantic dome.

Trump has been featured numerous times on The Simpsons, making it possible the screenshot depicting Lisa glaring at Trump not implausible:

However, a reverse image search indicated that as far back as 2016, the image seen did not actually feature an angry Lisa: 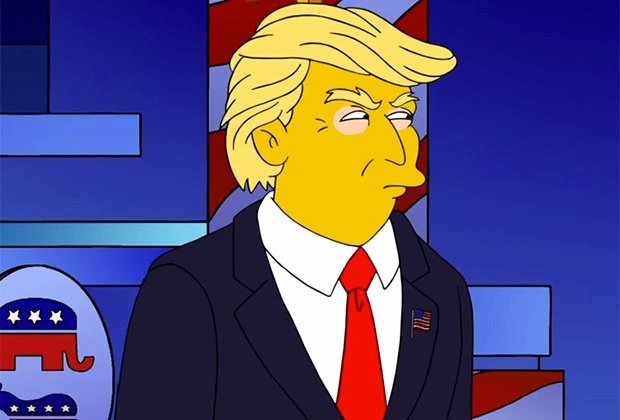 A TVLine.com blog post featuring the screenshot indicated the program from which it originated aired in August 2016, and was not related to Lisa’s crusade in the 2007 Simpsons movie.

Like most “Simpsons predicted this” memes, the Greta Thunberg vs. Lisa Simpson version was padded with doctored screenshots to advance the claim that the show had “predicted” Thunberg’s advocacy via Lisa. Although a subplot in the 2007 feature film The Simpsons did include Lisa’s presentation of “An Irritating Truth” (and the newspaper did appear on screen), the most notable portion of the meme, the “glaring Lisa” screenshot, was fabricated. Trump did not appear as a character in the film, and elements of the film were paired with a doctored screengrab to falsely suggest otherwise.