A photograph shows a "defend the police" march across the Brooklyn Bridge on July 19 2020, which the media refused to cover.

In July 2020, a photograph of a purported “defend the police,” “pro-police,” or “back the blue” march across the Brooklyn Bridge began circulating — alongside claims that “even Fox News” refused to cover the massive event:

Defend the Police March over the Brooklyn Bridge yesterday!

What’s this! Back the blue on the Brooklyn Bridge? I never saw this on the news! Not even FOX! pic.twitter.com/qO9qssgUpd

Funny we didn’t see this on the news… Pro-Police demonstrators march across the Brooklyn Bridge! pic.twitter.com/mpkuGTG8sP 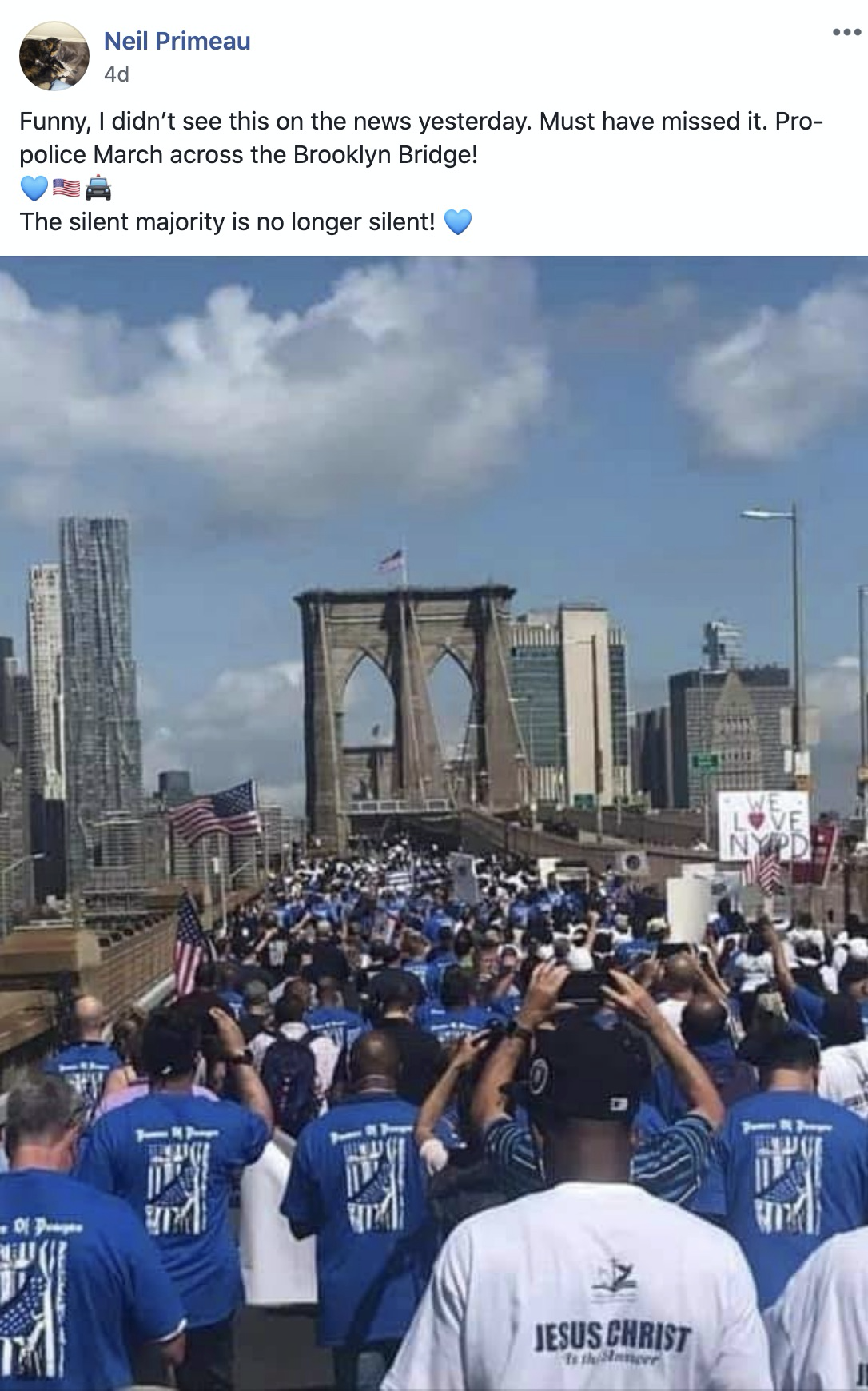 Funny, I didn’t see this on the news yesterday. Must have missed it.

Pro-police March across the Brooklyn Bridge! 💙🇺🇸🚔 The silent majority is no longer silent! 💙

“Yesterday” would place the march on July 18 2020. One visible sign read “WE LOVE NYPD,” a possible source for the claim that the march was “pro-police” or a “back the blue” rally.

What the mainstream media won’t show you. (pro-police rally recently in NYC) from forwardsfromgrandma

A Facebook commenter shared the following video of what appeared the be the same march:

Using reverse image search, we located a July 23 2020 Christian Post article about the event, which was real and took place on July 15 2020. However, it was described primarily as a religious event:

A group of clergy rallied elected officials and hundreds of New Yorkers last Wednesday [July 15 2020] for the “Jericho March” across the Brooklyn Bridge where they were joined by law enforcement groups and seen worshiping together in a video that has been viewed more than 1 million times.

Two spellings were provided by the outlet; in its headline, the site called it the “Jerricho March.” As for the event’s purpose, the Christian Post linked to another news organization (showing that at least two had reported on the march) and said:

Bishop Gerald G. Seabrooks of Rehoboth Cathedral in Bedford-Stuyvesant told Kings County Politics in an interview [after the march] about the biblical meaning of Jericho.

The event, which started in Cadman Plaza Park, Brooklyn, and ended at City Hall was initially conceived by a coalition of black clergy who are calling for reforms to policing, healthcare and education. Sergeants Benevolent Association, a police union in New York City, also joined the march, describing it as a rally to “support law enforcement” as well as clergy, according to a flyer.

The Christian Post described the Jericho March as initiated by Black clergy members, and added that it had been arranged to call for reforms to “policing, healthcare, and education.” On July 15 2020, amNY — a New York City news organization — reported on arrests ahead of the event (again, showing that it was not ignoring the Jericho March.)

That reporting was a bit fuzzy on whether the march itself was aligned with “back the blue” or “pro-police” demonstrators:

However, the article subsequently noted that the organizers were not anticipating the “pro-police groups”:

One of the event’s organizers said he was surprised by the large police group presence at the march, but said that he didn’t take issue with the their participation if they joined for religious reasons or to call for unity.

“I was surprised by the large police marching crowd also. But if it’s about God and Unity, who am I to complain,” said Tramell Thompson, a subway conductor and host of the labor-focused online show Progressive Action. “The origin of this march is about Jesus, God and Unity … Clergymen are leading this march, not police.”

Another site reported on clashes within the groups, as well as tension with law enforcement:

The Jericho March featured clergy leaders joined by community leaders, elected officials and other multi-faith-based and law enforcement groups from in and around New York City. They marched across the Brooklyn Bridge yesterday, Wednesday, July 15, in the name of unity against gun violence, which unfortunately was marred by the constant and violent clashes between Occupy City Hall counter-protesters and the NYPD.

The morning started off with the gathering of the two or three main groups that intended to march across the Bridge from Cadman Plaza in Brooklyn to City Hall Park in Lower Manhattan. The Power of Prayer group, which was mostly affiliated with police and religion, was represented in blue T-shirts, and general Jericho Marchers were represented in white T-shirts.

Gothamist, another well-known New York City news source, published an article of their own (headlined “Blue Lives Matter Protesters And NYPD “Hijacked” A Black-Led Prayer March, Organizers Say”) on July 15 2020. According to Gothamist, the march’s organizers claimed that their event was “hijacked” by pro-police marchers after a policing group mischaracterized it:

The organizers of an anti-violence prayer march said that Blue Lives Matter activists, including some NYPD officers, “hijacked” their pro-reform march on Wednesday [July 15 2020] — leaving the marchers confused and guilt-ridden as cops cracked down on anti-police counter-protesters.

The march across the Brooklyn Bridge to City Hall was initially conceived by a coalition of Black clergy leaders as a community-focused Christian unity event. The flyer called for reforms to policing, health care and education, and included no mention of an NYPD presence.

But after the Sergeants Benevolent Association distributed a separate flyer for the event — describing it as a rally to “support law enforcement,” as well as clergy — hundreds of current and former NYPD officers showed up, sporting matching blue t-shirts, waving Thin Blue Line flags, and holding signs in support of police funding.

“When I seen the Blue Lives Matter flag I’m like, what is going on? This is not what it’s about,” recalled Tramell Thompson, the leader of Progressive Action, which helped organize the event with the United Clergy Coalition. “If police officers are men and women of God, there’s nothing wrong with that. But to bring ‘Blue Lives Matter’ to a church event, I think it took away from the message.“

Thompson’s interpretation of the event was reflected in the narrative spread on social media in the tweets and Facebook post above. According to Thompson, Jericho March organizers felt as if the police groups purposely reinvented the march to create the false impression of community support:

[Thompson] said he later realized that “the NYPD co-opted” the prayer march to make it appear they had the community’s support. “If you look at their flyer, they have none of our agenda items on it,” he added. “It’s like they hijacked our march.”

Clearly, Thompson’s hunch panned out. Instead of social media discourse about the march’s stated purpose, users inaccurately claimed the media “ignored” a “pro-police march.” Gothamist further reported that coopting the message wasn’t the only outcome of the “hijacking”:

At the direction of Sergeant Arthur Smarsch — himself an SBA board member and participant in the march across the Brooklyn Bridge — NYPD officers charged at the group, demanding they disperse and arresting them as they walked backwards.

Multiple Black marchers told Gothamist they were disappointed by the NYPD’s presence at the event. “You know, they got a point,” said one woman, as Black Lives Matter activists asked the group why they were supporting cops. “We didn’t know this was going to happen. To me, it feels like a bait and switch.”

Myriad social media groups claimed that a “pro-police,” “back the blue,” or other march across the Brooklyn Bridge in support of law enforcement went unreported by the media in July 2020. In addition to misrepresenting the date of the event, the posts mislabeled a religious “Jericho March” as a “pro-police effort.” Organizers of the march described the characterization as a “hijacking” of the event, coopting the community effort to call for reforms to — among other things — policing. News about the march was widely reported in outlets including amNY, Gothamist, and the Christian Post.