Amish people are not contracting coronavirus because they don't have televisions.

In July 2020, a number of Facebook memes circulated riffing on the same theme — that Amish people in the United States were not developing COVID-19, because they “don’t have television sets.”

We observed this claim spreading in the form of a variety of memes, typically either outright stating the claim, or depicting two apparently Amish people purportedly discussing a lack of televisions and coronavirus in their communities: 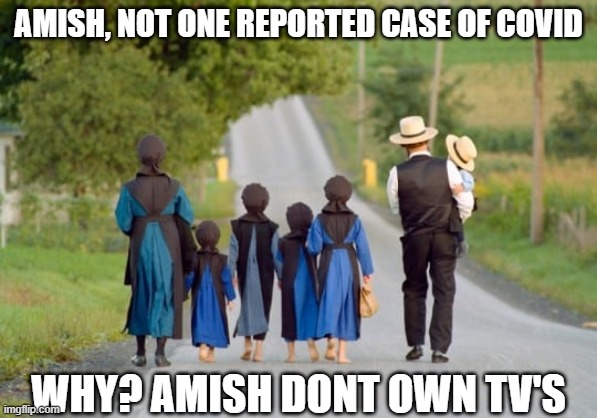 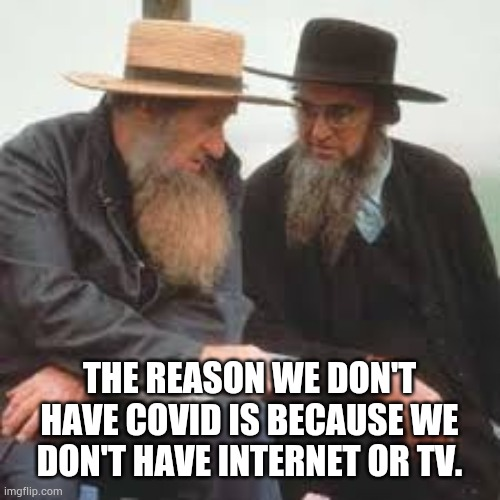 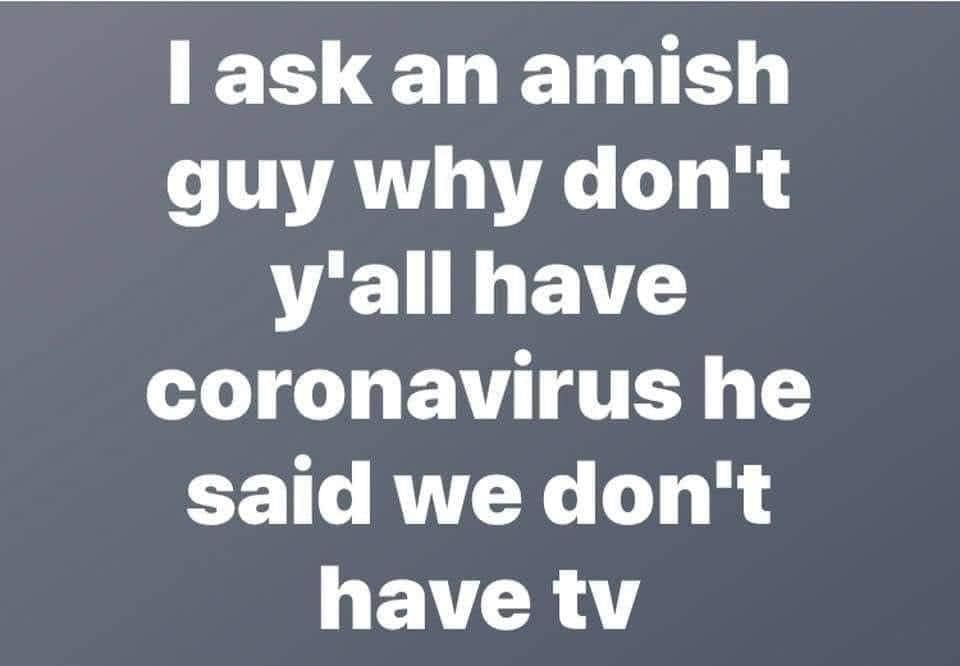 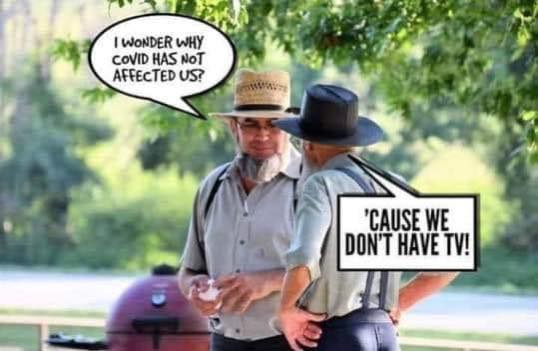 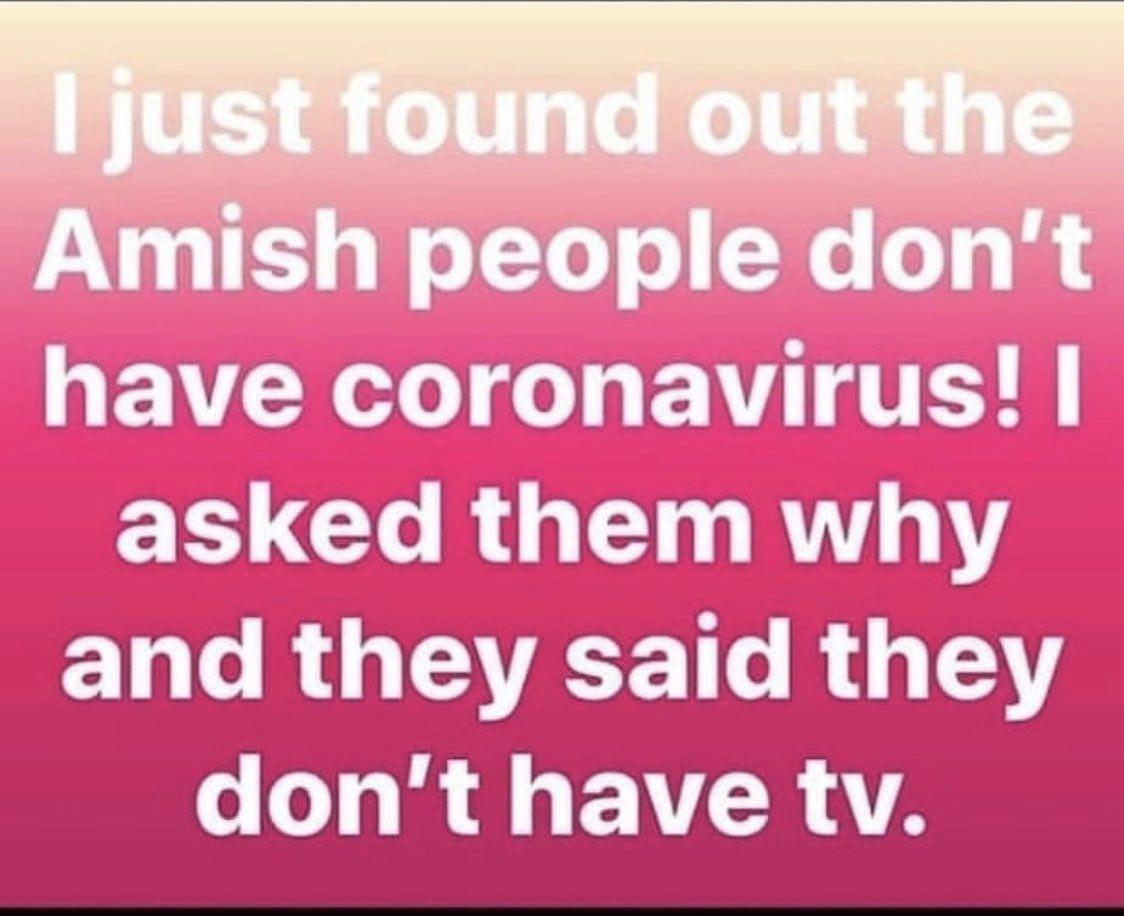 Although an occasional variation indicated the Amish “don’t have the internet,” television was largely described as the means by which Amish people avoided the COVID-19 pandemic.

Do Amish People Know About Coronavirus?

We noticed that the first autopopulated search for “do Amish …” in July 2020 was “do Amish people know about Coronavirus?”, indicating a level of concern among people who are not Amish for Amish communities during the pandemic. Google Trends indicated interest in whether Amish people knew about COVID-19 peaked numerous times, first in mid-March 2020, and again in July as the pandemic worsened.

Do Amish People Have Access to Television, the Internet, or Other Modern Technology?

According to Discover Lancaster, the non-Amish belief that the Amish are totally walled off from all technology is erroneous:

Telephones are an interesting illustration of the way that Amish families incorporate technology into their lives. Visitors [to areas where Amish people live] often mistakenly think the Amish use nothing modern. So, when they notice an Amish person making a call from a pay telephone booth, they might be surprised. They may wonder why Amish sometimes use the phone of their “English” (non-Amish) neighbors. Many visitors are even more shocked to discover that some of the buildings that resemble outhouses sitting near an Amish house or in a field are actually private Amish telephone booths.

Noting that Amish people typically do not own telephones, the site explained how telephones made their way into Amish communities in the 1950s:

The use of the “community phone” or “phone shanty” was permitted beginning in the 1950s, when more Amish were forced to go into businesses and hotels to use phones for emergency purposes and to contact doctors, dentists, veterinarians and food dealers. This community phone building, which often resembles an outhouse, is typically built at the end of a farm lane and shared by several neighboring families. The objective of this concept was to allow access, but maintain distance. Hence, the phone is not in the house and the number is unlisted, to be used essentially for necessary outgoing calls, not socializing.

As is typical of the Amish, when a new technology comes along, its effect on the church and community is examined. The technology should not be an intrusion into the home, but rather serve the social purposes and goals of the group. With that in mind, the Amish often re-purpose the technology, in a sense, to align with their community beliefs.

In other words, technology like phones or television are not foreign, alien concepts to Amish people. A gazebo retailer based in Manheim, Pennsylvania had this to say of the relationship between Amish people and technology in general:

The Amish do not have electricity running into their houses like the average American does, true. However, most families and businesses have generators which they use to power various appliances or devices in their homes. Also, though they will not allow a phone in their homes, it is not uncommon for Amish to own cell phones for business purposes, or to have a landline phone in the barn or other outbuilding.

Although it was hard to be sure, it seemed possible that Amish cell phone owners might, on occasion, sneak a peek at the internet in addition to making phone calls.

As far as Amish awareness of the coronavirus pandemic, a news source in Pennsylvania (home to a very large Amish community) addressed how the Amish were faring in early April 2020. Steven Nolt, a senior scholar at Young Center for Anabaptist and Pietist Studies at Elizabethtown College told PennLive.com that even in the pandemic’s early days, community leaders and the communities they led were very aware of the virus and its spread:

“They take this seriously and have gotten messages from trusted sources,” Nolt said. “At the same time many Amish folks are also taking their cues from their non-Amish neighbors and friends. In a rural context, a semi-rural context, I think we are seeing that not necessarily all Americans in those settings are responding in the same way.”

Nolt also explained that the idea Amish people are unaware of current events or didn’t read newspapers was yet another fallacy:

The Amish may not be as connected to current news sources as the general public, but they are also not cut off.

“There is a popular impression that the Amish are entirely sequestered and that they have no idea what is going on in the world,” Nolt said. “That’s simply not true, especially here in southcentral Pennsylvania, in Lancaster County.”

The Amish are regular newspaper consumers, and have regular contacts with non-Amish friends and co-workers who tend to keep them apprised of current events.

“We are all concerned about our Amish neighbors,” Lehman said. “They are well informed and know what is going on. We are trying to maintain the lines of communication open and we are at least informed in what steps they are taking to mitigate this COVID-19 pandemic.”

“[Amish communities have] been very open, wanting to understand what COVID is about and what it meant to them[.]”

On April 11 2020, a regional expert spoke to NBC News and referenced the “Amish internet,” and how information spreads by word of mouth “fairly quickly” in Amish communities. On May 30 2020, a local news source in Pennsylvania reported that Amish communities complied with state orders and closed their schools — even introducing virtual learning:

In mid-March [2020], Pennsylvania Gov. Tom Wolf ordered all Pennsylvania schools to close, prompting an abrupt shutdown of the state’s public and private schools – and, it turns out, Amish one-room schoolhouses.

Local experts in Amish and Old Order Mennonite culture say most, if not all, of the 250-or-so area Amish-run schools closed in accordance with Wolf’s order. And, just like at many traditional schools, learning never stopped.

While most schools in the state shifted instruction online, Amish schools switched to remote assignments with paper and pencil.

Did Any Amish People Get COVID-19?

Unfortunately, the notion that the pandemic spared the Amish community was not rooted in any factual reality.

On April 14 2020, Nolt spoke to another outlet about Amish workers exposed to the broader community. In May 2020, Amish people continued following social distancing recommendations overall.

On June 16 2020, a news organization in Ohio — another place where there are Amish communities — reported that “communities in Holmes County, including the Amish, have been hit by the virus about equally.”

That same day, another news outlet in Ohio confirmed an outbreak of COVID-19 in an Amish community:

LOUDONVILLE, Ohio (WJW) — The Ashland County Health Department (ACHD) on [June 16 2020] warned the public of a COVID-19 outbreak in the Amish community in the Loudonville area.

In a news release, the health department said, “An outbreak is declared when at least two or more individuals have tested positive for an infectious disease. There are currently 6 confirmed cases (5 Ashland residents) affiliated with this outbreak, with several tests pending, 69 individuals in quarantine, and an unknown number of unreported illnesses.”

“Please, continue to treat our Amish neighbors with kindness and support, while taking steps to limit your exposure to this outbreak,” said Heather Reffett, ACHD’s Health Commissioner. “The health department is actively working to ensure that everyone who needs to be tested is tested and that those who need medical treatment have access to health care. The most effective measures that we have to prevent the spread of the virus is individual behavior as well as enforcement of isolation and quarantine orders. It is critical that those who have been exposed remove themselves from the general population.”

On June 26 2020, reports indicated that the outbreak was worsening:

LOUDONVILLE — Health officials are reporting an increase in coronavirus cases among the area’s Amish communities.

On [June 26 2020], the Ashland County Health Department confirmed an uptick in cases, initially reported in Loudonville — a village of less than 3,000 (2010 Census data) that spans both Holmes and Ashland counties — as the virus spreads in both counties.

Health officials said on [June 26 2020] that an unknown number of Ashland County Amish are affected by the spreading virus. A third cluster of cases involving four individuals, of which three are Ashland residents, is associated with a home-care agency.

On June 27 2020, a Pennsylvania newspaper reported on an outbreak in Lancaster’s Amish communities. The scope of the outbreak was uncertain at that time due to gaps in testing.

A number of Facebook memes claimed that Amish people did not contract coronavirus or develop COVID-19, because “they don’t have televisions” or the internet. The claim was doubly false, as Amish communities experienced outbreaks of COVID-19. The second claim about a lack of televisions and a lack of knowledge of the pandemic was rooted in several misconceptions about Amish people, not to mention televisions. Amish leaders were kept abreast of the pandemic in its early stages, Amish people do use (but often don’t own) devices like cell phones, Amish people read the news, and Amish people practiced social distancing on state recommendations to avert the spread of the virus.