"People are ... forgetting that in 1918 the second wave of the Spanish Flu reportedly killed 20-50 million. The first wave only killed 3-5 million."

Against the backdrop of spreading (but engineered) COVID-19 anti-lockdown protests in April 2020, a tweet claiming that a “second wave” of the 1918 Spanish flu pandemic was far deadlier than the “first wave” attracted a large number of likes and shares:

In its entirety, the tweet addressed calls to lift lockdown, quarantine, shelter in place, or stay at home orders:

COVID-19 prompted ongoing interest in the 1918 Spanish Flu pandemic in a variety of ways, as discussed on an earlier page:

A Centers for Disease Control and Prevention “Past Pandemics” page began by explaining that in all, that pandemic resulted in an estimated 50 million deaths worldwide:

The 1918 influenza pandemic was the most severe pandemic in recent history. It was caused by an H1N1 virus with genes of avian origin. Although there is not universal consensus regarding where the virus originated, it spread worldwide during 1918-1919. In the United States, it was first identified in military personnel in spring 1918. It is estimated that about 500 million people or one-third of the world’s population became infected with this virus. The number of deaths was estimated to be at least 50 million worldwide with about 675,000 occurring in the United States.

As is the case with COVID-19 as of April 2020, the world in the early twentieth century was faced with a pandemic for which no pharmaceutical interventions existed:

While the 1918 H1N1 virus has been synthesized and evaluated, the properties that made it so devastating are not well understood. With no vaccine to protect against influenza infection and no antibiotics to treat secondary bacterial infections that can be associated with influenza infections, control efforts worldwide were limited to non-pharmaceutical interventions such as isolation, quarantine, good personal hygiene, use of disinfectants, and limitations of public gatherings, which were applied unevenly.

The CDC’s “Pandemic Influenza Storybook” was, despite its depressing title, a useful and interesting read for those with time on their hands.

An undated History.com page addressed the common nomenclature for that previous pandemic, and explained that its novel features left the young and healthy unexpectedly vulnerable:

It’s unknown exactly where the particular strain of influenza that caused the pandemic came from; however, the 1918 flu was first observed in Europe, America and areas of Asia before spreading to almost every other part of the planet within a matter of months.

Despite the fact that the 1918 flu wasn’t isolated to one place, it became known around the world as the Spanish flu, as Spain was hit hard by the disease and was not subject to the wartime news blackouts that affected other European countries. (Even Spain’s king, Alfonso XIII, reportedly contracted the flu.)

One unusual aspect of the 1918 flu was that it struck down many previously healthy, young people—a group normally resistant to this type of infectious illness—including a number of World War I servicemen.

The Spanish Flu’s ‘First Wave’ Versus its ‘Second Wave’

In a separate part of the History.com page, the “waves” of the 1918 pandemic were mentioned.

The description didn’t really address why a first and second wave might have been different, instead just acknowledging that there were two waves and describing them. That explainer described the waves as distinct, with the first a mild version of Spanish flu, and a second wave that was both more contagious and more deadly:

The first wave of the 1918 pandemic occurred in the spring and was generally mild. The sick, who experienced such typical flu symptoms as chills, fever and fatigue, usually recovered after several days, and the number of reported deaths was low.

However, a second, highly contagious wave of influenza appeared with a vengeance in the fall of that same year. Victims died within hours or days of developing symptoms, their skin turning blue and their lungs filling with fluid that caused them to suffocate. In just one year, 1918, the average life expectancy in America plummeted by a dozen years.

Although the excerpt above described a “first wave” and “second wave” of Spanish flu in 1918, it didn’t immediately explain the difference in casualties or what may have caused a deadlier second wave. However, there are analyses which include pertinent details about the 1918 pandemic, and how its study informed the approach to future pandemics. Specifically:

A CDC chart illustrated the three waves of the 1918 influenza pandemic, where the “second wave” was clearly the deadliest: 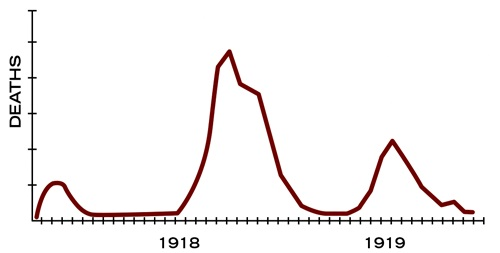 Although the chart’s vertical axis was not labeled, it was clearly measured in orders of five (millions); the first wave came in at around five, and the second between 25 and 30. Those peaks appeared to be aligned with the ratios in the tweet above.

Applying the ‘Waves’ of Spanish Flu to COVID-19

A cited piece of 2013 research, “Inferring the causes of the three waves of the 1918 influenza pandemic in England and Wales,”  indicated that modern researchers endeavored to piece together the causes behind the various waves of influenza for the duration of the pandemic, as its abstract explained:

Past influenza pandemics appear to be characterized by multiple waves of incidence, but the mechanisms that account for this phenomenon remain unclear. We propose a simple epidemic model, which incorporates three factors that might contribute to the generation of multiple waves: (i) schools opening and closing, (ii) temperature changes during the outbreak, and (iii) changes in human behaviour in response to the outbreak. We fit this model to the reported influenza mortality during the 1918 pandemic in 334 UK administrative units and estimate the epidemiological parameters. We then use information criteria to evaluate how well these three factors explain the observed patterns of mortality. Our results indicate that all three factors are important but that behavioural responses had the largest effect. The parameter values that produce the best fit are biologically reasonable and yield epidemiological dynamics that match the observed data well.

In the body of that research, researchers indicated social distancing in some areas appeared to impact overall mortality rates:

Restriction of human contact patterns affects infectious disease transmission. In the USA in 1918, regions that differed in the public health measures that were employed also differed in the temporal pattern of mortality. In Australia in 1918, social distancing measures appear to have substantially reduced the influenza clinical attack rate.

In its conclusion, researchers posited that the three factors examined (schools opening or closing, temperature changes, and changes to patterns of human behavior) were all factors in the rises and falls of infection rates:

We found that the observed three-wave pattern of pandemic influenza in the UK in 1918 is best explained by accounting for all three factors. Without behaviour change, the model is unable to explain the occurrence of all three waves. In particular, the decline of the second wave in the winter followed by a resurgence can only be explained by behavioural response, at least in our framework. The end of the first wave, after a relatively small number of deaths, on the other hand, is more likely to be due to climate or school-term effects. These two effects can substitute for each other to a certain extent, but our model shows that accounting for both does a much better job of explaining the observed patterns, suggesting that both mechanisms were in fact important.

How Many People Died in Each Wave?

A notable feature of modern research into the 1918 Spanish Flu outbreak involved the use of speculative language — “inferring,” or “estimating.” A March 2020 Washington Post infographic about pandemics in general placed the number at around 50 million in total — higher than at least the two waves described in the tweet:

The flu came in two waves, starting in 1918 and ending in 1920. The number of infected is staggering —as many as 500 million, with estimates of 50 million deaths worldwide, according to the CDC. Isolation and quarantines were used to slow down transmission. Even President Woodrow Wilson was stricken, nearly derailing talks at the Paris Peace Conference, where the flu left him bedridden for days.

Once again, historical epidemiology relied heavily on best estimates due to the limitations of medical literature at the time (as well as an ongoing world war.) History.com also provided a very broad range:

The horrific scale of the 1918 influenza pandemic—known as the “Spanish flu”—is hard to fathom. The virus infected 500 million people worldwide and killed an estimated 20 million to 50 million victims— that’s more than all of the soldiers and civilians killed during World War I combined.

To recap, we began with a very popular April 2020 tweet:

That tweet cautioned people “so ready to get back to life” and end quarantines and lockdowns that the second wave of the Spanish flu pandemic killed 20 to 50 million, versus a first wave which killed three to five million. It was definitely true that the 1918 influenza pandemic involved three distinct waves, and the second of the three was clearly the deadliest.

It is also true that modern scientists and historians have endeavored to piece together the science of the 1918 pandemic in an effort to understand how it happened and how it stopped. Researchers credited, among other factors, the use of physical distancing as a factor in regions that were less severely affected.

Additionally, the second wave is believed to have been exacerbated by great upheavals during that time — World War I essentially directed the flow of the virus’ spread. A mutation of the virus between the first and second wave also caused additional mortality, as the second wave was more aggressive and deadly than the first (and those exposed and sickened in the first wave appeared to be immune.)

Finally, estimates for how many people died in the 1918 Spanish Flu pandemic fluctuated widely, with some as low as 17 million and some as high as 100 million. A CDC chart measuring the waves in units of five million hewed fairly close to the figures in the tweet. But because of the depth of the ancillary details, we rate this claim decontextualized.