President Donald Trump asked about the possibility of injecting people with disinfectant to treat COVID-19.

While social media users might not believe it, it is true that United States President Donald Trump asked during a briefing about the possibility of injecting disinfectants into a human body to treat COVID-19 on April 23 2020.

The president’s outlandish and medically unsound suggestion came after a presentation from Bill Bryan from the Department of Homeland Security. Bryan, who leads the agency’s science and technology division, had said that the disease “dies quickest in sunlight,” later adding that people should still practice physical distancing (also called social distancing) to remain safe.

But following his remarks, Trump took to the stage and said:

Supposing we hit the body with a tremendous, whether it’s ultraviolet or just very powerful light, and I think you said that hasn’t been checked but you’re going to test it. Supposing you brought the light inside of the body, which you can do either through the skin or in some other way. And I think you said you’re going to test that too. Sounds interesting. And then I see the disinfectant where it knocks it out in a minute. And is there a way we can do something, by an injection inside or almost a cleaning? It would be interesting to check that. That you’re gonna have to use medical doctors with.

Transcripts and footage were quickly shared and spread online:

Trump: “And then I see the disinfectant where it knocks it out in a minute. And is there a way we can do something, by an injection inside or almost a cleaning? It would be interesting to check that. That you’re gonna have to use medical doctors with.”

“The disinfectant, where it knocks it out in a minute, and is there a way we can do something like that by injection inside, or almost a cleaning. It gets in the lungs” — Trump seems to suggests that injecting disinfectant inside people could be a treatment for the coronavirus pic.twitter.com/amis9Rphsm

When later asked about testing Trump’s hypothesis on injecting disinfectant, Bryan said, “We don’t do that within our lab.” Trump then chimed in, “Maybe it works, maybe it doesn’t work.”

Following Trump’s remarks, Reckitt Benckiser — the company that manufactures household cleaning products Lysol and Dettol — released a statement urging users not to test the president’s theory for themselves.

“Under no circumstance should our disinfectant products be administered into the human body (through injection, ingestion or any other route),” the statement read.

That evening Dr. Stephen Hahn, commissioner of the Food and Drug Administration (FDA), also refuted Trump’s idea in an interview with CNN.

“I certainly wouldn’t recommend the internal ingestion of a disinfectant,” Hahn said.

Meanwhile, the New York Times was criticized online for its coverage of Trump’s display, specifically a Twitter post seemingly treating the idea that injecting bleach into one’s self is harmful as something up for debate.

“At a White House briefing, President Trump theorized — dangerously, in the view of some experts — about the powers of sunlight, ultraviolet light and household disinfectants to kill the coronavirus,” the tweet read. 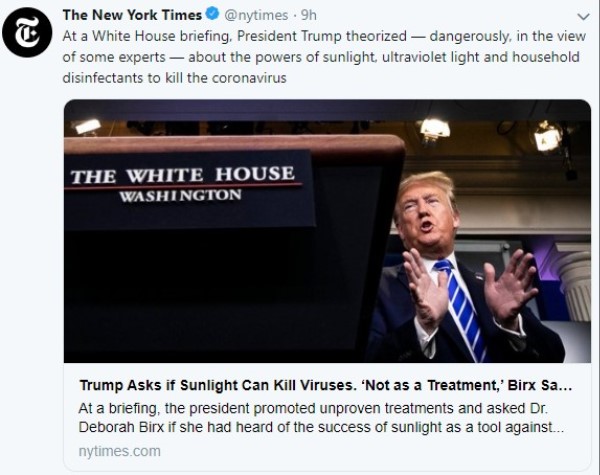 The newspaper’s actual story on the briefing did not mention any “experts” who would advocate using disinfectants against the disease.

When contacted for comment, the Times sent us a link to a subsequent post saying, “We’ve deleted an earlier tweet and updated a sentence in our article that implied that only ‘some experts’ view the ingestion of household disinfectants as dangerous. To be clear, there is no debate on the danger.”

President Trump has repeatedly said that Americans should consult with medical doctors regarding coronavirus treatment, a point that he emphasized again during yesterday’s briefing. Leave it to the media to irresponsibly take President Trump out of context and run with negative headlines.

Trump also attempted to backtrack a day later, claiming that he was being “sarcastic” and then telling reporter Jeff Mason, “I was looking at you.”

“No you weren’t sir,” Mason responded. “I wasn’t there yesterday.”

Reporter: Some doctors want you to clarify that you weren’t telling people to inject disinfectant into their veins.

Trump: I was being sarcastic, obviously, based on the way the question was asked. I was looking at you.

Reporter: I wasn’t there.

The Guardian reported that days before the remarks, Trump was contacted by Mark Grenon, whose Florida-based group, Genesis II Church of Health and Healing, sells chlorine dioxide bleach as a “miracle mineral solution.” Grenon’s group claims, falsely, that the substance (billed as “MMS”) can cure not only COVID-19 but cancer and HIV, among other illnesses.

Grenon read the letter he said he sent to Trump on his radio show, and also gushed over Trump’s remarks — with no indication that he took them to be sarcastic — on his own Facebook page.

“Trump has got the MMS and all the info!!!” he wrote. “Things are happening folks! Lord help others to see the Truth!”

Grenon’s “church” was also ordered by a federal court to stop selling its product after the US Justice Department requested a temporary injunction against the group, which had already incurred a warning letter from the FDA over its practices.

“Despite a previous warning, the Genesis II Church of Healing has continued to actively place consumers at risk by peddling potentially dangerous and unapproved chlorine dioxide products,” Hahn said in a statement. “We will not stand for this, and the FDA remains fully committed to taking strong enforcement action against any sellers who place unsuspecting American consumers at risk by offering their unproven products to treat serious diseases.”

Update, April 24 2020, 9:20 a.m.: Updated with comments from the Food and Drug Administration and Reckitt Benckiser as well as a note on the New York Times’ coverage of the story.