In an October 27 2020 news release, the Trump administration touted "ending the COVID-19 pandemic" as a first-term scientific achievement.

On October 27 2020, rumors appeared that the Trump administration credited themselves in a press release with “ending the COVID-19 pandemic” as a first-term achievement:

WTF headline of the year?

Tweets about the purported claim that the Trump White House counted “ending the COVID-19 pandemic” as an achievement primarily linked to articles:

The White House science office listed “ending the COVID-19 pandemic” as the top accomplishment of President Trump’s first term, even as the U.S. has set records for new daily infections and numerous hospitals across the country are stretched to their breaking points.

According to a press release intended to highlight the administration’s science accomplishments, the Trump administration said it “has taken decisive actions to engage scientists and health professionals in academia, industry, and government to understand, treat, and defeat the disease.”

The rosy outlook flies in the face of reality and underscores Trump’s efforts to continuously downplay the severity of the pandemic that continues to rage nearly uncontrolled across the country.

As of [October 27 2020], more than 226,000 people in the U.S. have died from COVID-19. The seven-day average of new cases is nearly 70,000, a record number that is only expected to get worse. Hospitalizations and deaths are also climbing steadily upward. According to the COVID Tracking Project, there are more than 42,000 people hospitalized with COVID-19, up from about 30,000 just a month ago.

However, we did not immediately find a link to primary sources supporting the claim. Although that article included hyperlinks, none pointed to citations; instead, the links pointed to site tags for generalized topics and individuals mentioned in the piece. Business Insider published an article on the topic which began with the following bullet points:

Business Insider did link to a PDF hosted on WhiteHouse.gov (archived as a PDF here), titled:

Neither the version live on October 28 2020 nor the archived copy included the words “ending the COVID-19 pandemic,” as indicated in Business Insider’s second bullet point. We found what appeared to be a screenshot of the phrasing in an October 27 2020 tweet from BuzzFeed science reporter Dan Vergano, but the link pointed to the PDF report above:

We finally found a copy of the press release, hosted on Politico’s site and archived here: 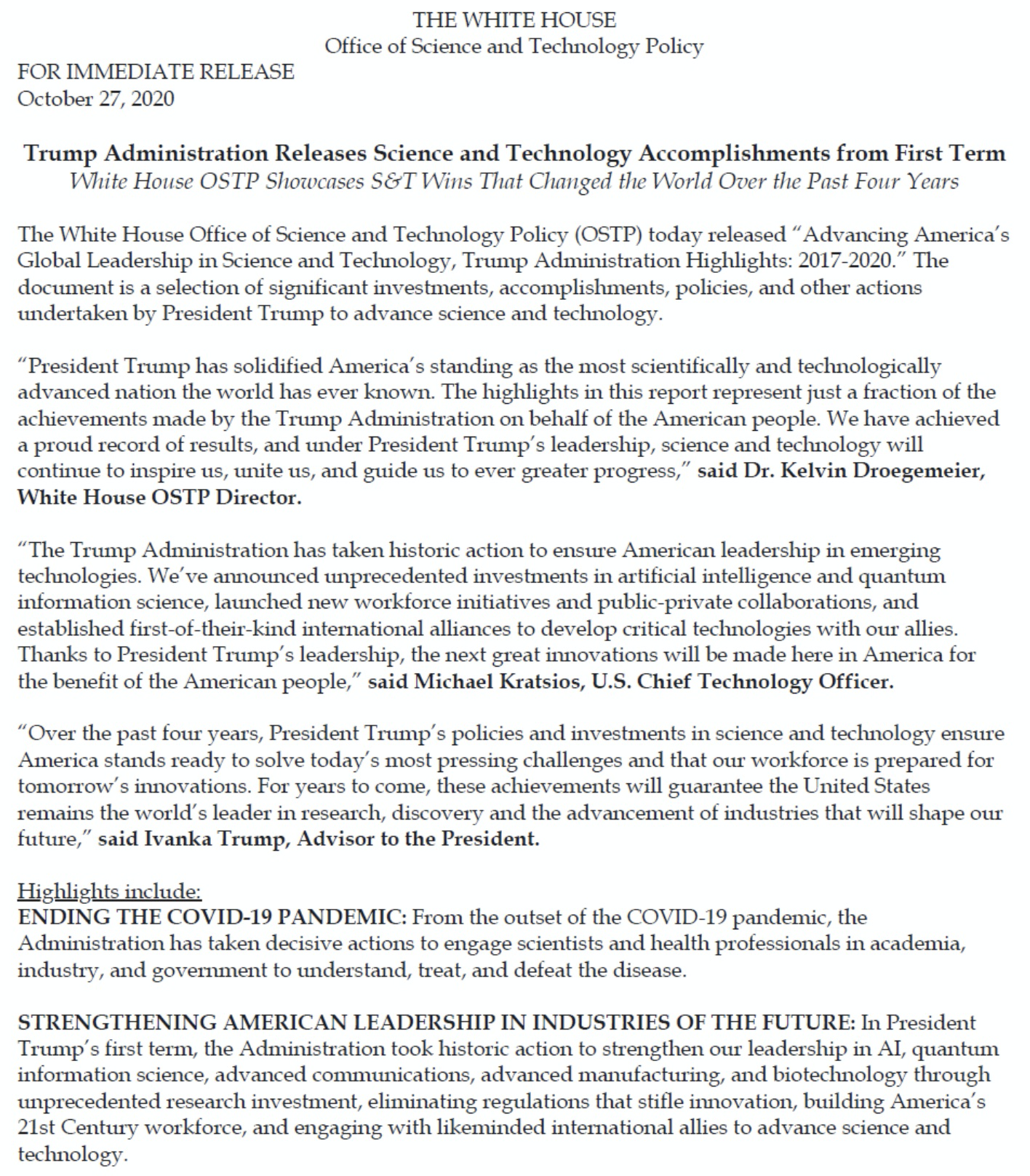 A header read “THE WHITE HOUSE Office of Science and Technology Policy,” and underneath that, it read:

The White House Office of Science and Technology Police (OSTP) today released “Advancing America’s Global Leadership in Science and Technology, Trump Adminstration Highlights: 2017-2020.” The document is a selection of significant investments, accomplishments, policies, and other actions undertaken by President Trump to advance science and technology.

After three paragraphs, a section read:

Highlights include:
ENDING THE COVID-19 PANDEMIC: From the outset of the COVID-19 pandemic, the Administration has taken decisive actions to engage scientists and health professionals in academia, industry, and government to understand, treat, and defeat the disease.

“It’s mind-boggling,” one official said of the White House’s assertion it had ended the pandemic. “There’s no world in which anyone can think that [statement] is true. Maybe the president. But I don’t see how even he can believe that. We have more than 70,000 new cases each day.”

Four officials working with the White House coronavirus task force told The Daily Beast that they viewed the White House’s statement as a personal slight and a public rebuke of their efforts to try and get control of the virus.

On October 28 2020, The Hill reported that the White House sought “to clarify” the comments, adding that White House strategic communications director Alyssa Farah had addressed the controversial wording during a Fox News appearance:

A press release claiming that President Trump ended the coronavirus pandemic was “poorly worded” and Trump does not believe the pandemic is over, a White House spokesperson said Wednesday [October 28 2020].

“The intent was to say that it is our goal to end the virus,” White House strategic communications director Alyssa Farah said during a Fox News interview.

“Cases are still rising and we need the American public to remain vigilant. This is the top priority of the president, defeating this virus and rebuilding our economy,” Farah said.

In sum, a number of tweets and articles asserted the White House cited “ending the COVID-19 pandemic” was a primary achievement of the Trump administration’s first term, phrasing that did not appear in the lengthy document often linked in references to the claim. That phrasing appeared in an October 27 2020 press release primarily sent to reporters and journalists, and although the claim was as real as it is untrue, it was not present in the underlying report.