The United States Department of Defense posted a commemoration of the Battle of the Bulge on social media — written from the perspective of the Nazis.

On December 16 2019, social media accounts affiliated with the United States military put up the following image with a post attached to it commemorating the 75th anniversary of the Battle of the Bulge: 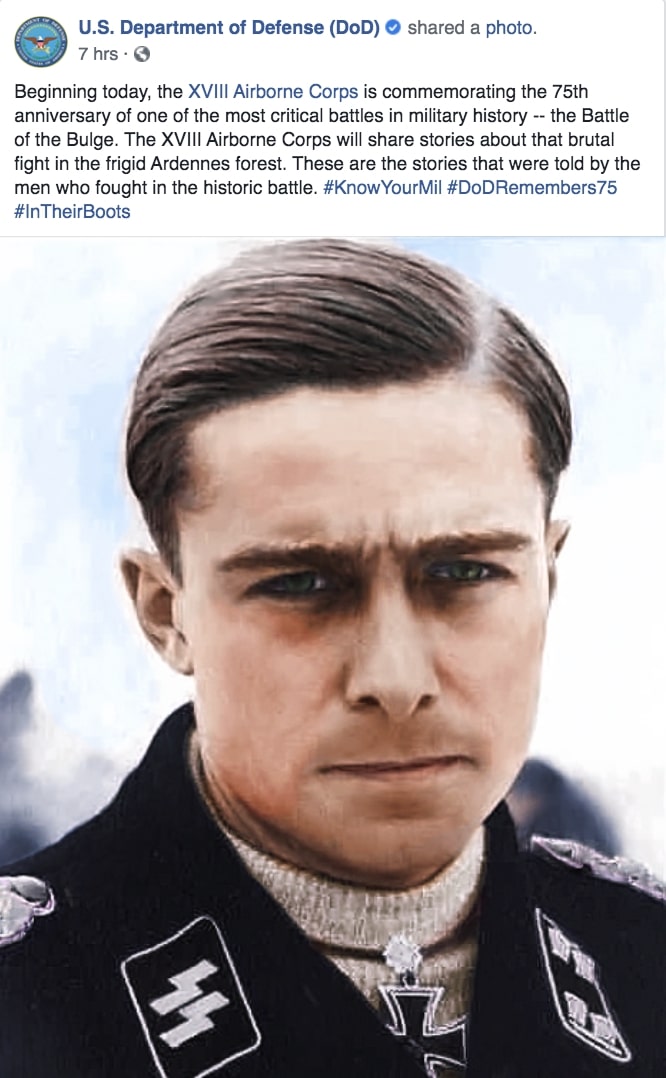 The photograph showed a Nazi war criminal, SS-Standartenführer Joachim Peiper.  The image was attached to a post that appeared to be retelling the story of the Battle of the Bulge — but from Peiper’s perspective:

DECEMBER 16, 1944: “TODAY WE GAMBLE EVERYTHING”
He paused at his desk. He hated to be alone with his thoughts, with the feeling of uncertainty he’d been trying to avoid for weeks.
There was an atmosphere of heaviness. This was the way he always thought the end of the world would feel.
The others were confident. They believed in der Führer. They believed in their Soldiers.
Not him.
He picked up the pen.
“Today we gamble everything.” He wrote. “If this does not work, we are doomed.”
He put down his diary.
It was time.
**********
75 years ago today, Standartenführer Joachim Peiper knew that his German forces were running out of weapons, out of men, and out of ammunition. He also knew that the Soviets, the Americans, and the British could continue fighting for months.
Five years after Germany began a war in Europe by invading Poland, this surprise western counteroffensive Peiper was set to launch was the only hope for the survival of Nazi Germany.
The mission was called “Unternehmen Wacht am Rhein” (“Operation Watch on the Rhine”), and Joachim would lead it. The fate of his beloved nation rested on his ability to lead his men through the American lines.
Joachim knew he had an advantage: the ferocious American airborne divisions – the 82nd, the 17th and the 101st, now consolidated under General Matthew Ridgway as the XVIII Airborne Corps – were out of the fight, resting in Wiltshire, England and Reims, France.
He also knew that he would attack into the Ardennes region of Belgium at the weakest point of the Allied line, against American forces with little combat experience. The weather would help: daylight was shortest and the fog and snow would limit Allied air support.
The moment had it arrived. It was the morning of December 16th, the time Adolf Hitler designated for the start of the attack. There was nothing left to do but give the order.
“Forward to and over the Meuse!”
Thus began the most critical moment in this Corps’ history.
*********
While Joachim Peiper began his push, our heroes, the Soldiers of the XVIII Airborne, were hundreds of miles away, in a group of training camps. That morning they slept, unaware that the die of war had been cast.
At approximately 4:30 on the morning of December 16th, the men of the XVIII Airborne Corps unknowingly became actors in a tragedy that would be told for the next 75 years.
*******

This post is the first in a series that will tell the entire story of the Battle of the Bulge through January 22nd.

Reaction on social media was swift and puzzled by the decision to begin the series from the perspective of the notorious SS-Standartenführer and, later, convicted war criminal for his role in the Malmedy Massacre, which incidentally, was mentioned nowhere in the original posts:

I am dumbfounded by the decision to prominently display a Nazi on military social media on the 75th anniversary of the Battle of the Bulge. pic.twitter.com/Do0mB7Guvj

Having dismounted the vehicles and taking cover in ditches alongside the road, Paluch recognized the troops as members of the vaunted SS by the distinctive skull and crossbones and lightning insignia on their collars. They represented the advance units of the 1st SS Panzer Division, known as Kampfgruppe (Attack Group) Peiper, after their leader, SS Lt. Col. Joachim Peiper, a highly decorated veteran of campaigns in France and Russia.

Along with members of his unit and others caught off-guard at the crossroads, the group of prisoners was herded into a field at the crossroads to await their fate. They had no warning of what would transpire next.

“Then one command car came up and took a couple shots, and every tank and halftrack that came around the corner shot into the group,” he said. “I was real lucky, as I was in the front end and only got hit slightly, but I think when they came around they fired into the center of the group.”

Pausing to catch his breath, he glanced over his shoulder and hesitated, almost as if reliving the moment in slow motion, before beginning again.

“This was their front line over here at one of these houses, and then anyone that moaned, they came around and they shot. I played dead and just lay there,” he said.

Paluch and some of the other survivors, hearts racing, many wounded, listened motionless as the sound of a large German mechanized column sped past. After what seemed an eternity, but from survivor reports was probably more like an hour or two, “all the trucks and halftracks passed and it was a little quiet,” Paluch recalled, his profound relief still evident after the lapse of 63 years.

“I didn’t know where they were headed, they didn’t tell me, and I just wanted to know how to get out of there,” he smiled.

It was about 4:30 p.m. and starting to get dark. With the noise of the column fading in the ears of the survivors who lay in the field among their dead and dying comrades, many leapt to their feet and raced for the tree line. As survivors sprinted for cover, a number were engaged by German infantry still stationed in the vicinity of the crossroads, killing at least 10.

After the end of World War II, the United States Army put 74 of the SS men on trial. All of the defendants were convicted and received sentences of either death or life in prison. However, there were attempts to discredit and overturn their convictions early on, as detailed in a 1949 investigation and subsequent report that was spurred by charges of unfair conduct by the prosecution:

Through competent testimony submitted to the subcommittee, it appeared that there are strong reasons to believe that groups within Germany are taking advantage of the understandable efforts of the church and the defense attorneys as well as in other ways to discredit the American occupation forces in general. One ready avenue of approach has been through the attacks on the war-crimes trials in general and the Malmedy case in particular. The subcommittee is convinced that there is an organized effort being made to revive the nationalistic spirit in Germany through every means possible. There is evidence that at least a part of this effort is attempting to establish a close liaison with Communist Russia. These matters, of course, must be judged against the back drop of the current situation in Europe and their probable effect in the event of a war involving Russia and the United States. Everything done to weaken the prestige of the United States and our occupation policies will play an important part in any emergency.

Many of the convicted in the various war crimes are former prominent Nazis, both civilian and military. In the Malmedy case alone there are three German generals, one an outstanding SS general, as well as officers of lesser rank who were excellent combat leaders. The desire of their former compatriots to have such persons released is undoubted. The implications are so serious that they cannot be disregarded by our country. In the event of the withdrawal of the American occupation forces, it is quite probable that there would be efforts made to have a general amnesty program to release these former Nazis and SS officers. That in itself is a most important consideration; but, in the event there is a larger plan to associate such individuals with the Communist forces of Europe, the problem is greatly aggravated. The subcommittee believes that such a situation presents dangerous possibilities.

These early efforts to delegitimize and cast doubt on the trials was successful; by 1957, every convicted man had been released. Historian Steven Remy researched how successful those efforts were for his 2017 book, The Malmedy Massacre: The War Crimes Trial Controversy, noting the relevance of the disinformation around the trials to the “fake news” that has become a touchstone of the post-2016 world:

Q: While you were certainly careful to resist that presentist impulse and let the story of the massacre and its aftermath unfold on its own terms, you also clearly highlight some ways in which The Malmedy Massacre can help us to understand aspects of contemporary political life. Do you worry at all that the resonance of the “fake news” phenomenon could obscure the particular contemporary relevance you had in mind?

A. Not at all. I wrote The Malmedy Massacre because I had become fascinated by the post-trial controversy. The present moment was also very much on my mind. I believed we needed a more historically informed debate about both interrogation methods and military courts. Another purpose was to contribute to what I would call the “untangling” of modern German history. For several decades now, German, North American, and Israeli scholars have—often in the face of considerable resistance—revealed the extent to which our understanding of Nazi Germany has been shaped by former Nazis and their sympathizers. Yet another aim was to call attention to a strain of German and American anti-Semitism that became the lifeblood of the Malmedy case controversy.

It has been encouraging to read thoughtful responses to the book—most recently by Gabriel Schoenfeld and Lawrence Douglas in The Weekly Standard and Foreign Affairs, respectively—that have engaged with these themes while also pointing out how the media generated a blizzard of fake news and how a small number of conscientious Army officials, Senators, intelligence operatives, and civil servants responded with diligence and honesty.

The misdirection and propaganda has persisted among some known disinformation purveyors, however. Disgraced Fox News talk show host Bill O’Reilly has long pushed alternate versions of what happened at Malmedy, getting the circumstances completely reversed:

In Malmedy, as you know, U.S. forces captured SS forces who had their hands in the air, and they were unarmed, and they shot them down. You know that. That’s on the record, been documented. In Iwo Jima, the same thing occurred. Japanese attempted to surrender, and they were burned in their caves.

The social media posts were quickly taken down without explanation, but not before a discussion on the Department of Defense’s Facebook page turned to defending the decision:

These posts have been deleted. What you missed was a comment thread with people defending Nazi soldiers and an Army acct arguing that the story of the Battle of the Bulge had to start with the German perspective. https://t.co/gVT4jrE9bG

We have contacted the U.S. Department of Defense for more and will update this story with their response.