While it denies any links to white nationalists, President Donald Trump’s re-election campaign spread a logo first used by a white supremacist group on August 28, 2019.

The logo — a red and white lion’s head inside a blue band adorned with stars — was spotted at the end of a video Trump posted on Twitter promoting his campaign.

But journalist Dustin Giebel and a Twitter user identified as @Rukhnamalives drew the connection between the logo and at least two groups associated with white supremacists. One of them, VDare, which has been recognized as a hate group by the Southern Poverty Law Center (SPLC) — posted it to Twitter in 2016: 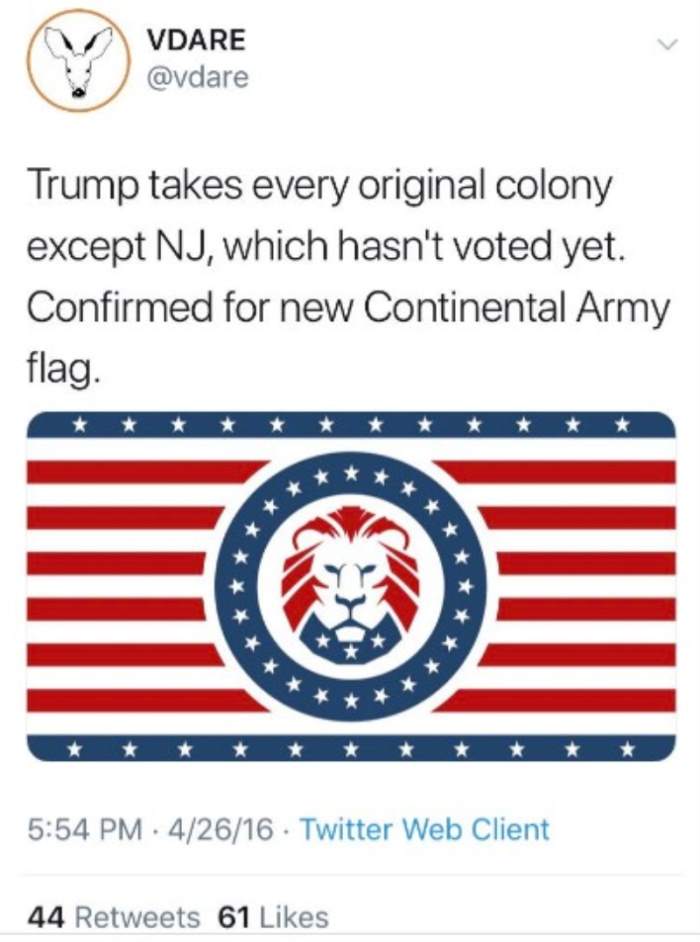 The logo has also been used by the “Lion Guard,” a group claiming that it was formed to “protect” supporters of the president. Both instances are part of a long tendency of fascist groups using that type of iconography. It also may have referenced a quote widely ascribed to Italian Fascist leader Benito Mussolini that Trump had tweeted a few weeks previously, in February 2016:

The tweet, created by a parody account and including Mr Trump’s handle, read: “It is better to live one day as a lion than 100 years as a sheep.”

The account is named @ilduce2016 after Mussolini’s Italian title, the Leader.

Asked about the tweet in a TV interview, Mr Trump said he wanted “to be associated with interesting quotes”.

“Mussolini was Mussolini… What difference does it make?” Mr Trump said when asked about the retweet on NBC’s Meet The Press programme. “It got your attention, didn’t it?”

The campaign’s use of an image associated with VDare came a week after reports that the Justice Department emailed links from that organization to immigration court employees that included anti-Semitic slurs and content attacking immigration judges in particular.

The president shared an independently-produced video that highlighted the strengths of the economy his policies have created. Any conspiracy connected to white supremacy exists only in the fevered minds of reporters who will believe anything negative about the president.

The lion logo also appeared on items being sold — and linked to the president through use of his name and campaign slogan “keep America great” — through online retail sites Redbubble and Spreadshirt, which allows users to submit designs that are then sold on a variety of items.

Redbubble’s guidelines regarding the use of racist symbols state:

Symbols and icons carry strong messages e.g. the swastika, crosses, the Confederate Flag, Hitler and the Koran. These symbols and their like can be used in a work, but only with considerable care. Works may be removed if:

Redbubble said in a statement, “We reviewed the products featuring the lion symbol associated with VDARE and under our guidelines are in the process of removing them.”

For its part, Spreadshirt’s standards regarding hate speech are as follows:

We remove designs and/or shops that come to our attention when we find them to have content that directly attacks people based on their:

Organizations and individuals dedicated to attacking and promoting hatred against these groups should not find a home on Spreadshirt. As with all of our Community Standards, we rely on you to report this content to us.

On September 2, 2019 a Spreadshirt spokesperson told us that the site will keep the lion logo items available.

“In case of the designs you mentioned we came to the decision to keep them since we think they are not violating our standards,” they said. “It is of course our policy to remove emblems or symbols of known hate groups but this seems not to be the case here. The design in this case seems to be part of a legal non-violent action. We do not see the Lion Head by itself as a symbol of hate speech or it violating our Community Standards in another way.”