U.S. President Donald Trump threatened to withhold federal disaster funding from California, falsely saying that it was the state's own fault for shoddy forest management.

Sizable wildfires burning up and down California in late 2018 left dozens of people dead, destroyed an entire Northern California town, Paradise, and the heat and speed of least two enormously destructive fires — the Woolsey Fire in the south of the state and the Camp Fire in the north — overwhelmed safety measures and firefighters:

…60 percent of California’s forests are on land owned by the federal government, mainly the National Forest Service and the U.S. Bureau of Land Management. The Camp Fire — which killed 86 people, more than any other in the state’s history — appears to have started in the Plumas National Forest.

FEMA has disbursed tens of millions of dollars to Camp Fire survivors and has been working with state officials on plans to remove debris from Paradise, which was virtually destroyed by the fire.

Confounding factors made 2018’s fires in California far more destructive than in previous years. In the Woolsey Fire, Malibu and Thousand Oaks residents say that they were stymied in part by lack of communication and outright disinformation spread on social media, as well as a shortage of resources because of other fires on the ground:

A Times review of hundreds of pages of public records and several hours of radio transmissions shows that first responders on the front lines of the Woolsey fire struggled during those first critical hours, stymied by communication breakdowns and a scarcity of air tanker support, equipment and firefighters.

Los Angeles County Fire Department sent some firefighters to the front lines but decided early on to deploy dozens more several miles away in the Agoura Hills area, according to interviews, incident logs and planning reports obtained under the California Public Records Act.

In the early days of the fires as the full scope of the devastation was just beginning to unfold, United States President Donald Trump said that the fault of the fires were due to California’s forest mismanagement and threatened to withhold federal disaster relief funding. The threat came, as with many of Trump’s statements, in a tweet: 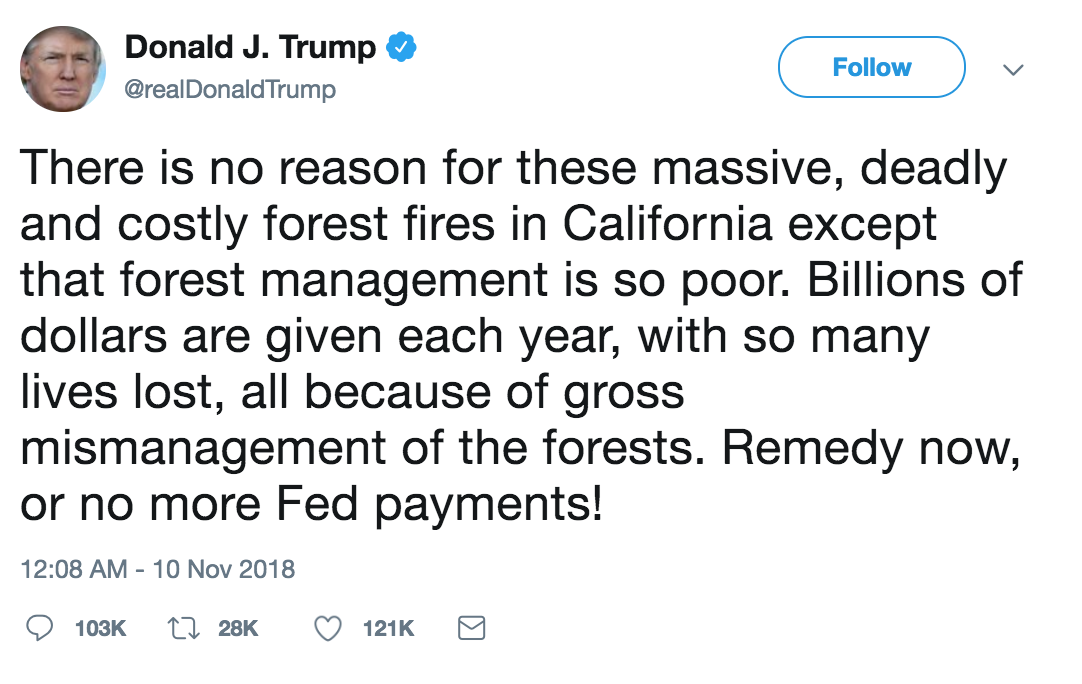 There is no reason for these massive, deadly and costly forest fires in California except that forest management is so poor. Billions of dollars are given each year, with so many lives lost, all because of gross mismanagement of the forests. Remedy now, or no more Fed payments!

It is true that Trump threatened to pull funding to California in a tweeted statement that immediately received widespread condemnation even as people searched for loved ones and the fires continued to rage. The threat was met with criticism and condemnation from all quarters, including firefighters out on the field.

“The president’s message attacking California and threatening to withhold aid to the victims of the cataclysmic fires is Ill-informed, ill-timed and demeaning to those who are suffering as well as the men and women on the front lines,” said California Professional Firefighters president Brian Rice:

At a time when our every effort should be focused on vanquishing the destructive fires and helping the victims, the president has chosen instead to issue an uninformed political threat aimed squarely at the innocent victims of these cataclysmic fires.

At this moment, thousands of our brother and sister firefighters are putting their lives on the line to protect the lives and property of thousands. Some of them are doing so even as their own homes lay in ruins. In my view, this shameful attack on California is an attack on all our courageous men and women on the front lines.

What is decidedly untrue is the reason Trump stated for the fires burning across the state. Forest mismanagement did not cause the destruction of towns and cities, and a large percentage of California’s forests are on private or federal land, not state land, as CPF’s Rice points out:

The president’s assertion that California’s forest management policies are to blame for catastrophic wildfire is dangerously wrong. Wildfires are sparked and spread not only in forested areas but in populated areas and open fields fueled by parched vegetation, high winds, low humidity and geography. Moreover, nearly 60 percent of California forests are under federal management, and another one-third under private control. It is the federal government that has chosen to divert resources away from forest management, not California.

Climate change is also a huge factor in the destructive nature of these fires, as non-native plants adapted to more frequent fire cycles take hold in the state’s altered terrain amid an ongoing historic drought. Further, these criticisms ignore that management and removal of dead vegetation is a more complex topic than anything that can be summed up in a tweet.

“W. R. Fons (1946) was the first to attempt to describe fire spread using a mathematical model,” wrote Richard Rothermel, a researcher whose work is still recognized as the standard for fire management and suppression, in a 1972 paper:

Fons focused his attention on the head of the fire where the fine fuels carry the fire and where there is ample oxygen to support combustion. He pointed out that sufficient heat is needed to bring the adjoining fuel to ignition temperature at the fire front. Therefore, Fons reasoned that fire spread in a fuel bed can be visualized as proceeding by a series of successive ignitions and that its rate is controlled primarily by the ignition time and the distance between particles.

Researchers at the California Chaparral Institute, which advocates for preserving native shrublands, pointed out in August 2018 that the majority of destruction occurs in populated areas away from forests:

Nearly all (16 out of 17) of the most devastating wildfires in California (i.e. greatest loss of life and property) have little to nothing to do with forests and dead trees. We have focused on the time since last October on our map, with an insert of San Diego County for a southern California perspective.

“We have the best firefighters and first responders in the country working in some of the most difficult conditions imaginable. We’re putting everything we’ve got into the fight against these fires and this request ensures communities on the front lines get additional federal aid,” said Governor Brown. “To those who have lost friends and family members, homes and businesses, know that the entire state is with you. As Californians, we are strong and resilient, and together we will recover.”

There is currently no word on whether there will be funding — but it’s true that Trump threatened to cut federal aid to California, although none of the reasons he cited for that threat have anything to do with the reality of what has made fires in California progressively more destructive.

On January 9, 2019, Trump repeated his threat to withdraw federal funding from the state, still ignoring the fact that the vast majority of California’s forests are either privately or federally managed and that the most destructive fires burned not through forests, but through cities and neighborhoods: 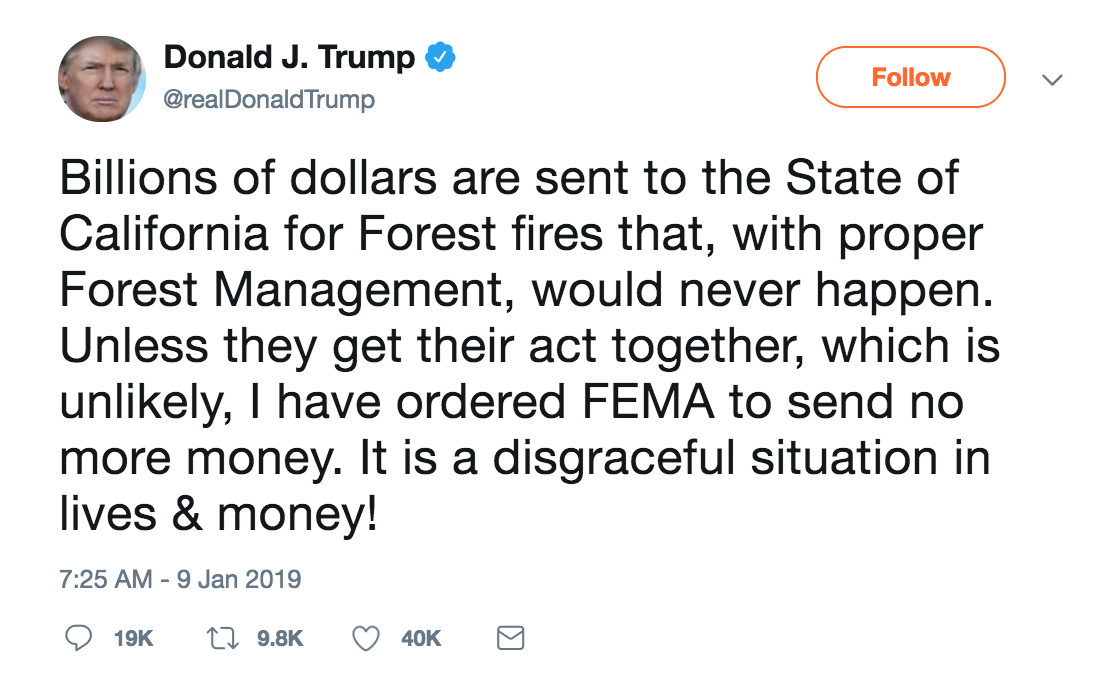 Billions of dollars are sent to the State of California for Forest fires that, with proper Forest Management, would never happen. Unless they get their act together, which is unlikely, I have ordered FEMA to send no more money. It is a disgraceful situation in lives & money!