A man with ties to some of the most violent hate groups in the United States has been arrested and charged with illegal possession of firearms just weeks after his younger brother — also reportedly a known white supremacist — committed suicide.

According to court documents, 30-year-old Jeffrey “Raph” Clark and his 23-year-old brother Edward Clark openly fantasized about killing “Jews and blacks” and sparking a civil war:

The Clark brothers were part of Richard Spencer’s entourage after he rose to prominence in 2017 and participated in the “Unite the Right” rally in Charlottesville that began with a tiki-torch procession as participants chanted “Jews will not replace us,” and ended with the murder of Heather Heyer.

The Washington Post reports that Jeffrey Clark’s family alerted authorities because of his increasingly erratic behavior after his brother Edward’s suicide. Reporters later found that Jeffrey Clark referenced an attempted domestic terror attack as a “dry run,” and followed Robert Bowers, the suspect in the November 2018 mass shooting in a synagogue, on alt-right social media network Gab:

Under the username @PureWhiteEvil, Clark posted over 3,700 times to Gab. Clark explained in August that he had moved to the site after multiple failed attempts to evade Twitter’s ban on his neo-Nazi content. “I used to be DC Stormer, DC Death Squad, then DC Bowl Patrol (which preceeded BOWL GANG) before giving up on being able to stay on Twitter after which I retired here.”

On Gab, Clark idolized Dylann Roof, the man who shot and killed nine black people at a Charleston, South Carolina, church in 2015, and obsessed over “cultural marxism” and baseless conspiracies involving vast pedophelia rings. He also posted hate speech and threats, including over 60 calls to throw Jewish and black people, journalists and perceived political enemies “feet first into a woodchipper.”

Relatives told police both brothers had been involved in alt-right movements, the court records said. Jeffrey Clark told FBI agents he and his brother became interested in guns in 2016 “because they believed there was going to be a civil war,” according to an account of his statement filed in court.

Police said in court documents that he used the social networking site Gab to share his views with others, including Robert Bowers, the suburban Pittsburgh man charged with federal hates crimes in the synagogue attack. Jeffrey Clark was “DC Bowl Gang” on the site, court files said, and Edward Clark went by “DC_Stormer.”

It turns out that their affiliations were not just with neo-Nazis through Gab, but with far more mainstreamed alt-right provocateurs, such as Jack Posobiec of Pizzagate notoriety.

The connections, in fact, are extensive:

In May 2017, the Clark brothers teamed up with far-right “Pizzagate” propagandist Jack Posobiec, who was then the D.C. bureau chief for the far-right website Rebel Media, to shoot footage for a film Posobiec was working on about Seth Rich, the Democratic National Committee staffer whose murder near the Clarks’ home in Bloomingdale has spawned numerous far-right conspiracy theories.

Laura Sennett, an anti-fascist researcher who works with One People’s Project, spoke with Jeffrey Clark a few weeks after he and his brother were spotted in Bloomingdale with Posobiec, who by then had been fired from Rebel under mysterious circumstances after plagiarizing Jason Kessler, the white nationalist who organized the Unite the Right rally.

“[Clark] told me that Jack Posobiec hired him and his brother to follow him with a camera to take video of his investigation of Seth Rich,” Sennett told HuffPost. “Not sure if it was a documentary or a news story, but [Posobiec] was doing some kind of reporting for Rebel Media. I asked him if Posobiec was aware of his Nazi beliefs. He told me that Posobiec absolutely was and had told Jeff that he was sympathetic to those beliefs.”

The Huffington Post also reports that the older Clark brother threatened one of its journalists, but police failed to act at the time:

This April, Clark threatened a HuffPost reporter, warning that the reporter would be going “feet first into a woodchipper.” The reporter told police about the threat in August. They did nothing at the time. In late October, D.C. police did come to Clark’s house in the Bloomingdale neighborhood after the death by suicide of his brother, Edward, but did not arrest him.

Journalist and author Alexander Reid Ross says that he recognizes the brothers from a talk they crashed in Washington, DC in 2017:

Whoa, these are the guys who tried to bust up my book talk in DC. There was a Daily Caller journo waiting in a cab outside livestreaming in case something went down. Instead, dozens of antifascists came and ensured the security of the space. Fash couldn’t even catch a ride home. https://t.co/0C2Pvqop17

Jack Posobiec then put up a pirated copy of Ross’s book on social media: 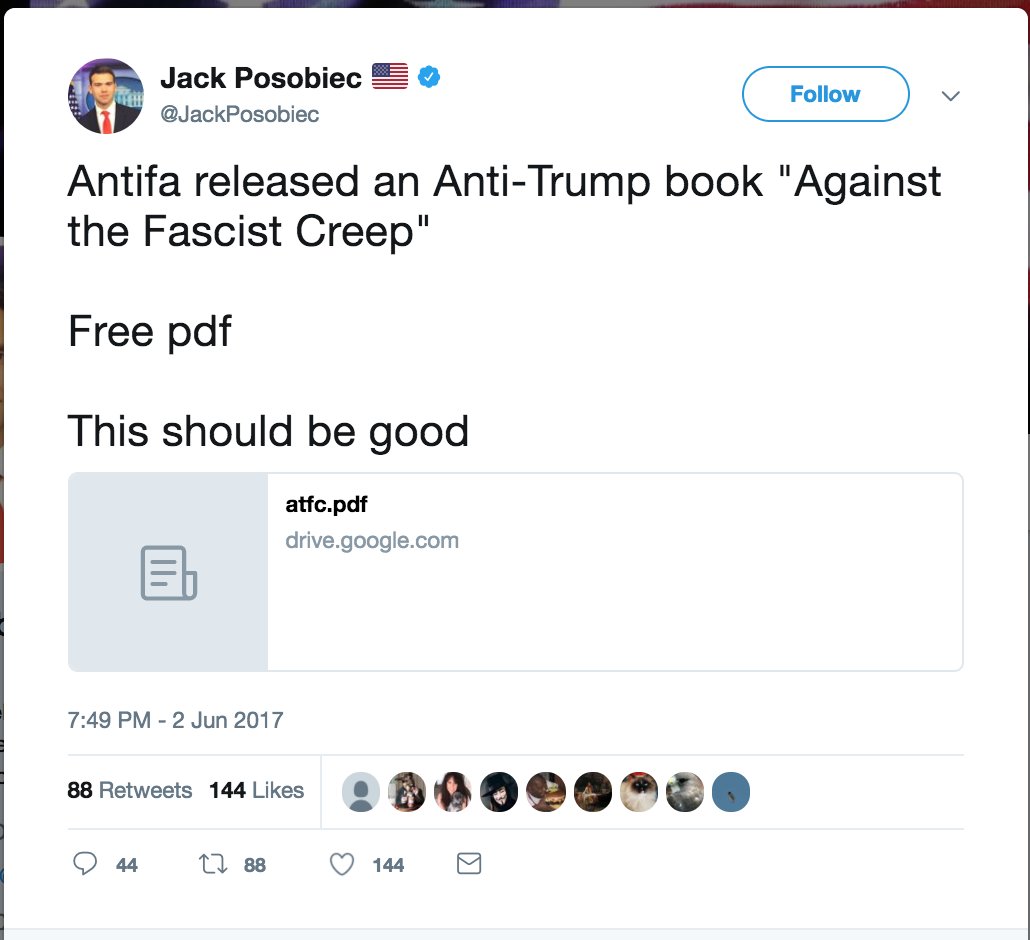 “They came in aggressively with MAGA hats on and were told to sit in the corner and be quiet, which they did as antifascist activists streamed in to ensure security,” Reid Ross told The Daily Beast:

After the event, as people were leaving, activists on the scene pointed out a cab hovering outside with a journalist inside pointing what looked like an iPhone, with attachments, at the building. He was identified as a reporter with the Daily Caller, and he had been waiting outside for a long time. The Clark brothers and their associates attempted to leave the scene in a cab, but the cabbie drove away after learning who they were, so they skulked off. Later that evening, Posobiec posted a pirated copy of my book on Twitter.

Clark’s arrest has exposed how closely alt-right figures work with open white supremacists, clearly showing — given the connections to alt-right media as well as the synagogue mass shooter and many people involved in the deadly August 2017 “Unite the Right” event in Charlottesville — that the perpetrators of violent racist attacks are not “lone wolves” as commonly portrayed, but a result of a broad network of people who work together to push corrosive messaging and imagery in order to radicalize the vulnerable.