On December 8 2019, the Facebook page “Feminists United” shared a screenshot of the following tweet about 235 reports of rape purportedly received by Uber in a year:

For every man that doesn't understand why women are fed up. Last year Uber received 235 reports of rape, 280 reports of attempted rape & 5,981 reports of sexual abuse between 2017 and 2018. So, men, I ask you, have you ever called your Uber and feared the driver may rape you?

For every man that doesn’t understand why women are fed up. Last year Uber received 235 reports of rape, 280 reports of attempted rape & 5,981 reports of sexual abuse between 2017 and 2019. So, men, I ask you, have you ever called your Uber and feared the driver may rape you?

In a tweet immediately following, the user added context, but she did not link to any substantiating information so readers could learn more about the claim:

These are US numbers

In the aggregate, the tweet addressed a broader debate about whether regular taxi cabs were safer than ride-sharing services such as Uber or Lyft. In 2015, The Atlantic addressed then-percolating reports of assault by Uber drivers and the lack of data regarding the safety of rideshare apps in general across major cities:

“There’s no way to search for that,” said Neva Coakley, a spokeswoman for the Boston Police Department. “We wouldn’t be able to speak to that because we don’t have data to support it. We don’t distinguish between what type of suspects they are.”

“We don’t keep specific data with relation to passengers being assaulted,” said Lee Jones, a spokesman for the New York Police Department.

“We don’t track offenses by whether they occurred in a taxi cab,” said Gwendolyn Crump of the Metropolitan Police Department in Washington, D.C.

“As far as tracking the offenses in taxi cabs specifically, I don’t have a way to look this up,” said Grace Gatpandan, a public information officer with the San Francisco Police Department in the city where Uber is headquartered. Police officers in Chicago did not respond to multiple interview requests.

That article included comments from New York City Taxi and Limousine Commission spokesman Allan Fromberg, and it paraphrased his suggestion that “some Uber complaints are invisible to law enforcement” because, he said, Uber received complaints directly.

In 2016, the relative risk of Uber or Lyft versus taxis was still a matter of speculation. An Associated Press story after a shooting incident involving an Uber driver reported:

[The issue of fingerprinting and background check protocols is where] taxi advocates hit Uber hardest, saying that Uber’s checks fail because they do not include fingerprinting of would-be drivers. Many law enforcement experts say a fingerprint search is the most comprehensive way to check someone’s background, and taxi regulators typically require one.

Uber counters that fingerprint checks are imperfect and that its background check process — which it says includes searches of motor vehicle department files and several criminal databases going back seven years — is excellent. But Uber can no longer claim its methods are “industry-leading.” Uber agreed to pay $28.5 million to settle a lawsuit (not the one filed by San Francisco) that alleged such safety claims were false. As part of the settlement, Uber’s “safe ride fee” will become a “booking fee.”

In that 2016 story, Associated Press cited available statistics from Austin, Texas, but noted that context to fully understand rates of risk were unavailable:

Amid a fight over whether Uber drivers should be required to submit to fingerprint checks, Austin, Texas, has released some information. According to a document compiled by the city, in 2015 Uber drivers allegedly were involved in 13 sexual assaults and one rape; taxi drivers, five; and Lyft drivers, six. One sexual assault was listed as Uber or Lyft.

But those numbers lack essential context, such as how many miles, trips or hours on the job cabbies log versus Uber drivers. Without that information, it’s impossible to tell whether a passenger is more at risk with one or the other.

In reporting in 2015 and 2016, a common element was a lack of data held on rider risk while using Uber and Lyft. Guido didn’t reference any particular news article in the two tweets, but on December 5 2019 (the day the tweet was published) a number of news organizations published reports about statistics about Uber and assault.

Statistics reported across outlets on December 5 2019 came from a December 6 2019 “Safety Report” released by Uber itself. An introduction to the report held:

[In 2017], Uber CEO Dara Khosrowshahi convened a dozen of the company’s top executives in a room to discuss an important issue: the safety of drivers and riders. The topic was broad: how could Uber — with nearly four million trips happening every day in the US alone — become the safest ridesharing app in the world?

What began that day was a 21-month effort that has included a review of hundreds of thousands of customer support requests; a complete rethink of how we categorize the most serious safety incidents that happen during Uber trips; an overhaul of how we train our support staff; and an even bigger investment in cutting-edge safety technology.

All of that work culminates in the Safety Report that we are sharing with you, the public, today.

Numbers referenced in both Guido’s tweet and in the media did not appear on the landing page for Uber’s 2017-2018 Safety Report, nor did they appear on a linked “Executive Summary” [PDF]. A “Frequently Asked Questions” section on the main page linked by the introduction defined the scope of the report:

Uber’s US Safety Report includes information about Uber’s actions related to safety and data on the most serious safety incidents reported on our ridesharing platform in 2017 and 2018. These incidents include traffic fatalities, fatal physical assaults, and sexual assaults … This report includes sexual assault incidents reported by both drivers and riders, plus fatal physical assaults and fatal motor vehicle crashes that occurred in connection with the Uber platform, regardless of who the victim or acccused [sic] party was.

Numbers in the tweet and articles, such as the 235 reported rapes, appeared in an 84-page long “Full Report” [PDF]. Figures of 235 rapes and 280 attempted rapes were on page 59, in a table titled “categories of sexual assault”: 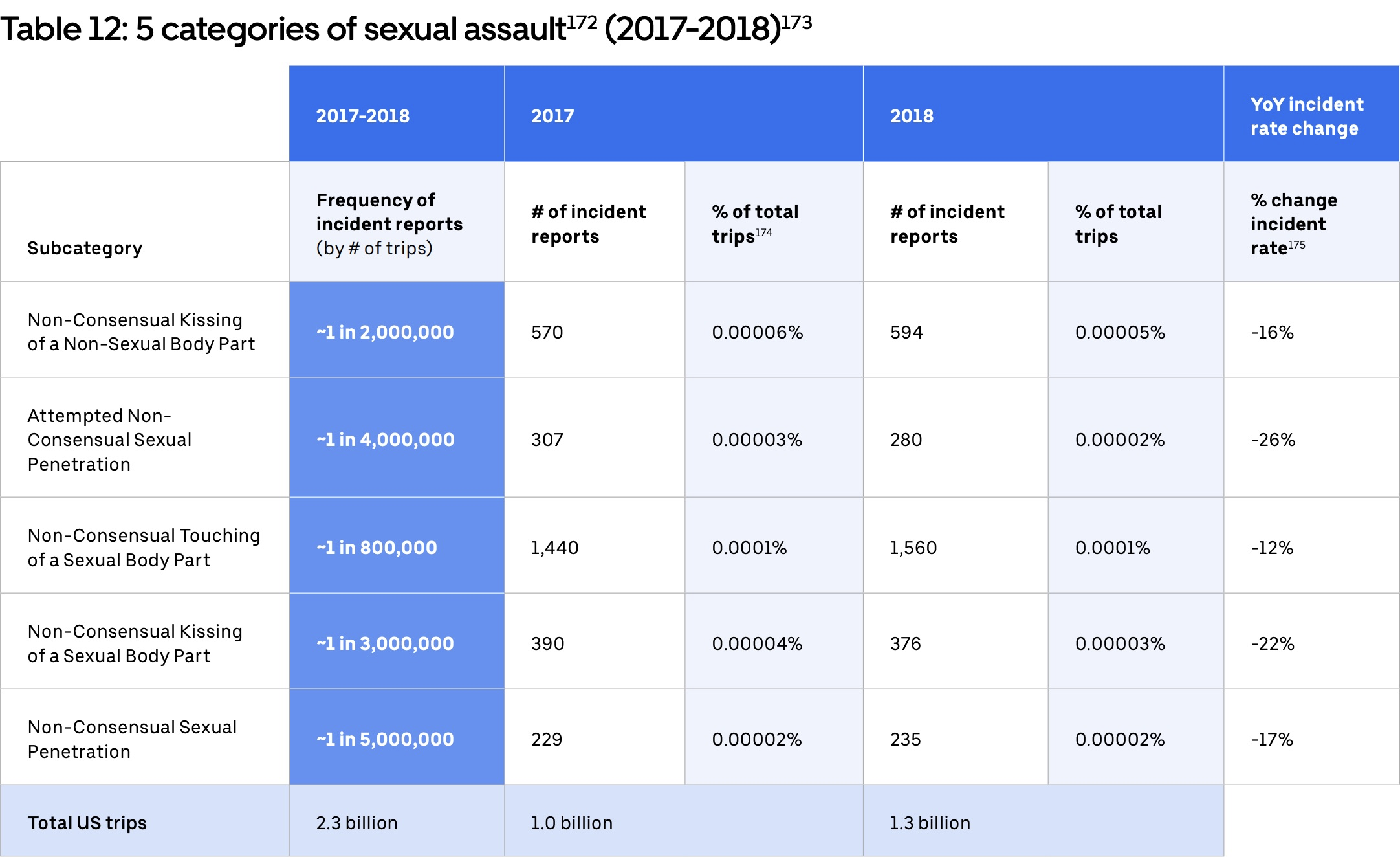 Those figures were for incidents reported by Uber in 2018; in 2017 Uber said that there were 229 reports of rape (“non-consensual sexual penetration”) and 307 reports of attempted rape (“attempted non-consensual sexual penetration.”) Each “number of incident reports” entry across the five categories was bookended by a “frequency of incident reports” (tallied in “less than one per X million” units) and “percentage of total trips” (tallied in a fraction of one percent.)

A final column calculated a “year over year incident rate change,” contrasting the percentage of reports to trips and recording any changes in those percentages. All five were negative percentages even when the figures were higher in 2018, presumably because the increased number of rides made the relative percentage lower.

From 2017 to 2018, Uber saw approximately a 16% decrease in the average incident rate across the 5 most serious sexual assault categories reported. Additionally, there were rate decreases across each of the 5 individual categories. These decreases may correlate with Uber’s substantial investments in safety over the past 2 years (see Safety commitments), although causation is difficult to determine given the myriad factors that can impact reported sexual assault rates.

We also know these decreases may not always be the trend. Experts and advocates have told us that releasing this type of report may actually lead to an increase in the number of reports in the future. That’s because, when it becomes clear that Uber is paying close attention to reports of sexual violence and taking action, survivors may feel more comfortable coming forward.

A third was a claim that Uber received 5,981 reports of sexual assault in total, a number which appeared nowhere in the various documents but was present in the tweet and CNN’s coverage of the report. That particular number was tallied by adding the numbers from all five categories in the table above for both 2017 and 2018. Added together, the reports numbered 5,981.

A factor about the figures that was not commonly expressed in third-party reporting on Uber’s figures was that the numbers themselves were provided by Uber — a business which would benefit from lower rather than higher numbers. The report included sections on methodology for both non-sexual related incidents (such as driver or rider fatalities and accidents) as well as a section on sexual assault methodology.

According to Uber, in 2018 the company partnered with experts from the National Sexual Violence Resource Center (NSVRC) and the Urban Institute in order to “develop a new taxonomy to better understand the reality of unwanted sexual experiences.” Of its final methodology in compiling the numbers, Uber said on page 15:

A footnote next to “48 hours” explained Uber’s reasoning in choosing a 48-hour window:

Incidents between parties paired via the Uber app may occur after the trip has ended. In general, post-trip incidents happen either immediately after the trip has ended or within a few hours of the trip’s completion. For audit consistency, and to err on the side of overinclusion, we determined that 48 hours is an auditable standard and adopted it for the purposes of this report only.

Another figure which didn’t commonly make it into reports had to do with physical assault-related fatalities, numbering 19 in total in 2017 and 2018:

As for the data source, Uber indicated that “user reports” were their primary source:

To prepare for this publication, Uber created a specialized audit team to review and accurately categorize the data contained in this report. This team reviewed approximately hundreds of thousands of user reports, representing a range of safety- and non-safety-related consumer issues to ensure that all necessary information was documented and all incident reports were categorized accurately and comprehensively.

Guido’s tweet and myriad articles indicated Uber received “235 reports of rape, 280 reports of attempted rape” and “5,981 reports of sexual abuse between 2017 and 2018.” It is true that Uber’s Safety Report released in December 2019 indicated that the service had received 235 reports of rape and 280 reports of attempted rape in 2018. It is also true that all five categories of unwanted sexual contact on the table containing that data, calculated and combined for 2017 and 2018, added up to 5,981 total reports. Of note is that those figures came from Uber and appeared to be based on reports sent to the company by users; no competing law enforcement dataset appeared to exist to contrast Uber’s self-reported numbers against tallies compiled by a neutral third party.