As child trafficking rumors combined with COVID-19 disinformation went viral in August 2020, concurrent rumors appeared that 800,000 children go missing every year in the United States — or that 2,000 are disappeared each day:

We addressed the entirety of the rumor in an August 11 2020 page:

Claims about 800,000 missing children continued spreading on Facebook, Instagram, Twitter, and other platforms — very frequently alongside heated, completely inaccurate claims that the problem is “worse than” COVID-19″ or “the real pandemic”: 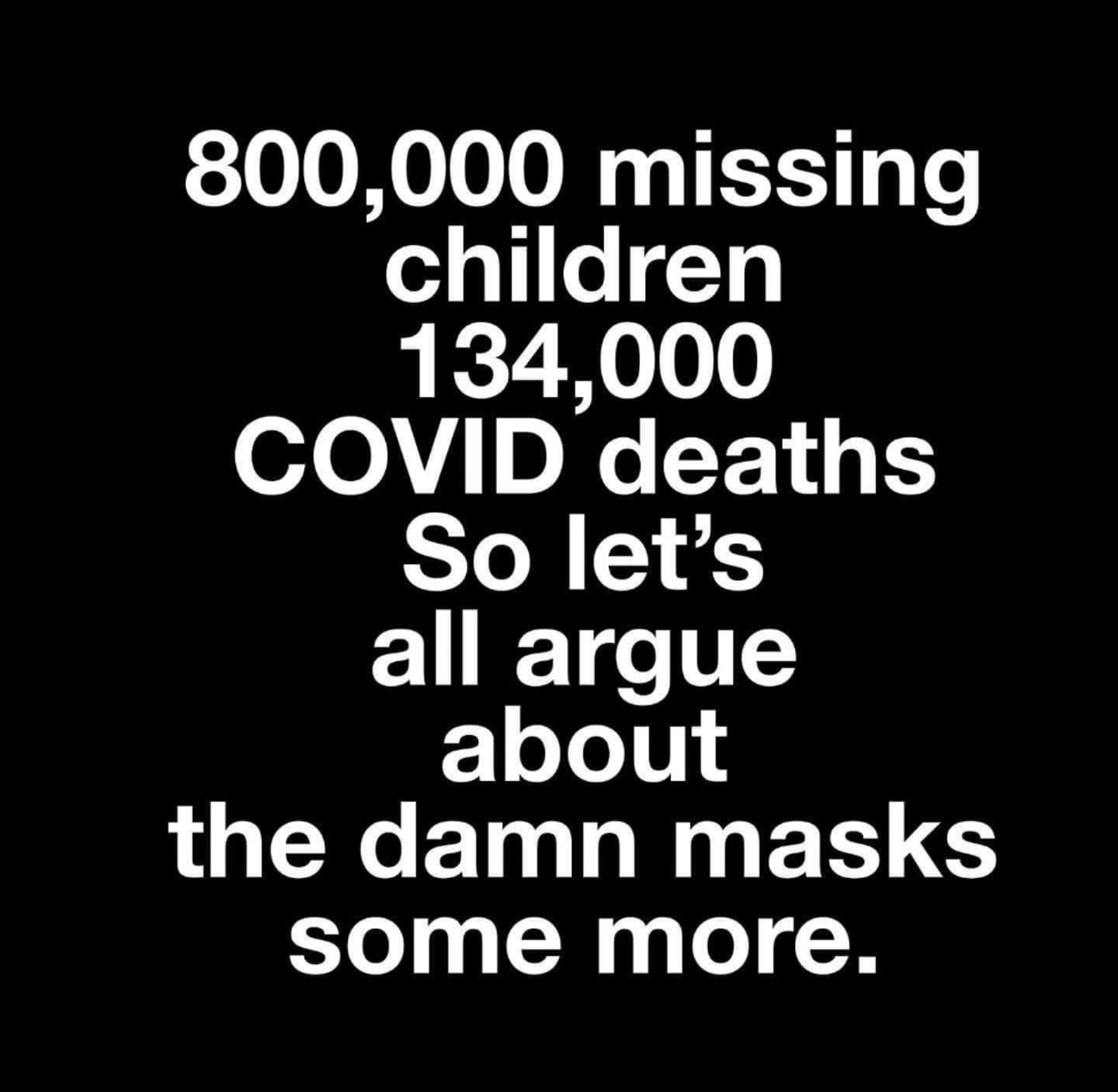 Very specific numbers often accompany posts like the one above:

According to the National Center for Missing and Exploited Children, roughly 800,000 children are reported missing each year in the United States — that’s roughly 2,000 per day. 83.3 per hour!

According to an August 11 2020 fact check by USA Today, some of the post went further in linking COVID-19 with child trafficking. In those posts, users claimed the use of masks exacerbated the risk of child trafficking (rated “false,” because it is.)

2,000 children go missing PER DAY in the U.S. alone. That’s 800,000 kids vanished every year. Being a parent and knowing that statistic or even thinking about what those poor children must experience is horrific.

Proof after proof is being exposed to us that there IS a global human/child trafficking ring, that it’s a MULTI BILLION dollar business $98 BILLION to be exact….that’s not a typo NINETY EIGHT BILLION (more than the sports & music industry COMBINED) & the elite are involved but yet, it continues to go almost completely unnoticed by the media.

Don’t you find it pretty interesting that 99% of the media is controlled & operated by 6 corporations who could easily manipulate what we are told, see & believe?

Why do you think this major pandemic is rarely being talking about?

More importantly, who do you think would NOT want this kind of news broadcasted for everyone to see?

[This list of events] has all gone down within the past 30 DAYS that I could find. If you thought 2020 was weird, the rest of it is going to be even more insane. Praying for the continued safe rescue of all of these poor people & children

On Reddit’s r/YouShouldKnow, the statistic in the viral posts was shared — but later removed:

YSK that although it sounds scary that 800,000 children go missing in the USA every year, 99% of those children are found alive and only ~115 per year are taken by strangers. from YouShouldKnow

The Source of the Dubious “800,000 Children Go Missing Each Year” Statistic 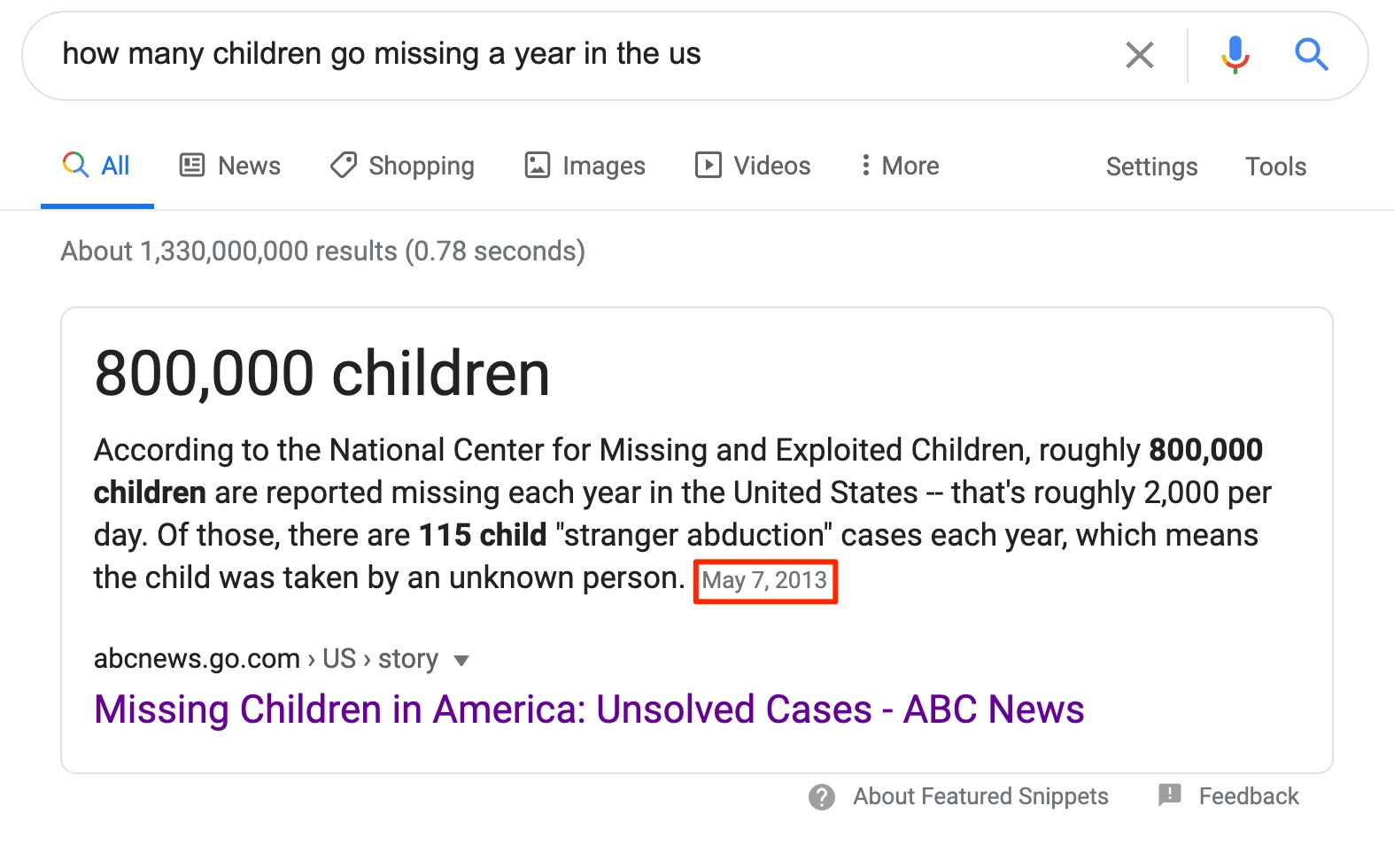 As seen in the screenshot, Google provided the 800,000 missing kids statistic in a highlight box, as a priority over all other search results. Also seen in the screenshot is a date on the article making the claim: May 7 2013, more than seven years before August 2020 — making us wonder why this is only of concern to people now.

It stood to reason a vast number of people spreading the figure of 800,000 missing children did not read the article, taking Google’s authoritative word for it. But we did, and after a brief introduction about then-recent recoveries of three missing women, the article reported about that statistic:

Thousands of people go missing in the United States each year and many are never heard from again.

According to the National Center for Missing and Exploited Children, roughly 800,000 children are reported missing each year in the United States — that’s roughly 2,000 per day.

Immediately thereafter, the article’s content undermined the claim as it spread in August 2020:

Of those, there are 115 child “stranger abduction” cases each year, which means the child was taken by an unknown person.

Here are a few children and young adults who have been missing for years and who the FBI and local authorities are actively looking for. Read more to find out how you can help bring them home.

800,000 Missing Children Per Year Versus Current Statistics and Context

According to the National Center for Missing and Exploited Children (NCMEC), both the figures and the context of those figures are important in understanding the actual scope of missing children, trafficking, and related issues.

An “About” page for NCMEC explained:

When a child is reported missing to law enforcement, federal law requires that child be entered into the FBI’s National Crime Information Center, also known as NCIC.

This number represents reports of missing children. That means if a child runs away multiple times in a year, each instance would be entered into NCIC separately and counted in the yearly total. Likewise, if an entry is withdrawn and amended or updated, that would also be reflected in the total.

NCMEC reported assisting in 29,000 of the 424,066 reports of missing children in 2019, or just under seven percent of cases, breaking down the numbers further. It looked as if NCMEC specialized in the category of endangered missing children officially classed as “runaways”:

In 2019 NCMEC assisted law enforcement and families with more than 29,000 cases of missing children.

In 2019, NCMEC responded to more than 10,700 reports regarding possible child sex trafficking.

NCMEC’s 10,700 reports of “possible child sex trafficking” amounted to roughly 1.3 percent of the 800,000 figure being bandied about social media. Following on from that, NCMEC didn’t say how many investigations were ultimately substantiated — presumably not all 10,700 reports.

“The largest category of missing children are so-called runaways – children missing because of family conflict – and 99% of them are located and re-united, although often there are subsequent departures,” said David Finkelhor, the director of the Crimes Against Children Research Center at the University of New Hampshire.

“The other thing that’s important here is that (the NCIC statistics are) about missing child incidents, not unique cases. So, the same child can go missing 20 times a year and still be filed each time,” Shehan said.

This means the number of children reported missing each year is, at face value, inflated, as many children in unsafe or unstable situations are likely to repeatedly run away or go missing. And those children are vulnerable.

It also means that far fewer than 2,000 children go missing every day in the United States, as that number is based on a greatly inflated average.

The true average is unknown, which also makes the likelihood of any individual child getting trafficked for sex unknowable. The number is almost certainly lower than the cited “66,000” statistic, though.

Megan Cutter, acting director of the National Human Trafficking Hotline, told USA Today that the resource did experience an uptick in calls during the pandemic — however, it wasn’t related to trafficking per se, but a “sharp increase in calls with urgent needs for food assistance and housing at the start of the pandemic.”

Claims that the “real virus” or “real pandemic” was the fact that 800,000 children went missing each year in the United States (or 2,000 each day) are flat-out false. There were 421,394 children reported missing in 2019 and 424,066 in 2018, numbers that still tell only half the story. When ABC News published the 800,000 figure in 2013, they noted that 115 of those cases were abduction by an unknown person. In 2020, 91 percent of the cases were classed as “runaways,” and as in 2013, less than one percent of abductions involved an unknown person. By its very nature, human trafficking and child trafficking remained largely unquantifiable — but it is simply false that 800,000 children vanished each year.