On August 11 2020, social media users shared a Facebook Live video (archived here), which purportedly unveiled a shocking surprise harbored by the popular LOL Surprise! dolls — that their bodies change color when immersed in water, often in the pattern of a bikini:

In a text box, the Facebook user wrote the following, but didn’t explain what the video was about:

At the end of the video, Williams said:

Who found out that cold water activated this? I don’t know … but thank them.

As we mentioned in previous fact checks and pages, the claim appeared at the same time that measures taken to slow the spread of COVID-19 during a global pandemic; rumors of child trafficking were used to push the #savethechildren  and  “child lives matter” hashtags in order to stir fears that masks — proven to cut back on transmission of a respiratory virus — were enabling would-be kidnappers to snatch children, with an added bonus of drowning out or distracting from discourse around the worldwide Black Lives Matter movement:

Do 800,000 Children Go Missing Each Year in the United States?

Williams begins the video at a kitchen counter, in front of a bowl of ice water and what appear to be several LOL Surprise! dolls. She explains the reason she made the video, primarily that she’d seen “a video on LOL dolls” and that when you soaked them in cold water, “lingerie … comes out”:

Ok listen, so we’ve all seen little conspiracy videos … I just seen a video on LOL dolls … and when you soak them in ice cold water … the lingerie [comes] out … that this little girl came out … I’m gonna do it myself since my daughter has a ton of them, and we’re gonna find out if [this] is really real.

From there, Williams dipped what appeared to be a doll without clothes. Within seconds, the doll’s body changed in water to create the appearance of a bikini or underwear. She gasped and said:

You guys see this, right? This is not … fake. Okay?

Williams then left the doll to dry and selected another LOL doll without clothes. She dipped a second doll to reveal a tattoo she described as a “devil tail” and “wings,” before immersing a third doll — which emerged with a long sleeve bikini top and bottom. Gasping throughout, she remarked:

This is not okay.

A fourth doll with blue space buns is dunked next, and the doll emerged from the bowl wearing a high-waist bikini bottom and, as Williams put it, “things on her boobs.” Some of the dolls she submerged later in the video “don’t do anything,” or didn’t change in any fashion when dipped in cold water.

LOL Surprise! Dolls Have “Surprise” Right in the Name

LOL dolls are one of several children’s toy brands produced by MGA Entertainment, as a December 2017 press release describes:

MGAE is the fastest growing toy company amongst the top 5 toy manufacturers in the U.S., up 70% for November, according to The NPD Group**.

“Our worldwide growth is over 200%.*** This growth is not just based on L.O.L Surprise. All our NEW innovations are doing great. Crate Creatures Surprise has become a best seller in its category after just two weeks. Glam Goo, another NEW innovation for spring 18 is also an early sell out. And, with Smooshins, kids can make L.O.L. Surprise dolls over and over again and keep being surprised,” said Isaac Larian.

Emerging as a “hot” toy fad in late 2016 and through 2017, LOL dolls are marketed as harboring a “surprise” — a design quite likely intended to leverage the massive success of YouTube toy “unboxing” videos:

Lol Dolls, as they’re informally known, are three-inch tall figurines that come covered in seven layers of paper and wrapping. Children must delve through this extensive packaging to discover the surprise, small doll within.

The toys follow the “unboxing” trend that has seen thousands of videos uploaded to YouTube, in which children unpackage their toys to great delight.

In other words, LOL dolls are specifically intended to “surprise” children beyond their initial reactions while “unboxing” the toy. In November 2018, The Atlantic examined the symbiotic relationship between childrens’ unboxing videos and the LOL dolls designed to wring every dollar out of that lucrative market:

Toy makers, who are experts at capitalizing on children’s weird interests, have now figured out how to make a toy that replicates what kids like about unboxing videos. Enter the L.O.L. Surprise! doll, a sphere the size of a bocce ball that consists of seven layers of packaging. Kids peel away the layers of crinkly plastic, which contain stickers and messages and tiny accessories that are surely crunched under many a parental foot, and find a small, nearly naked plastic doll with giant Bette Davis eyes who measures just a few inches tall.

Although reverse-engineering toys to appeal to YouTube viewers is a relatively new phenomenon, marketing “surprises” to children is generations old:

Surprises aren’t exactly new in the toy industry: Kids have long searched for prizes in the bottom of their Sugar Smacks or Cracker Jack boxes, and surprise toys aren’t all that different from the hundreds of toys that have cycled through kids’ playrooms and closets over the years. Kids desperately want some weird thing, nag their parents about it for days, and then get it, play with it, and cast it aside. But with surprise toys, they’re not nagging their parents about an actual toy that they want. They want the pleasure of consuming, to be let into the adult world of buying things, opening them, and then casting them aside.

In short, parents on the receiving end of requests for LOL dolls are likely fully aware that their draws are hidden features and unboxing mysteries. In that sense, the video largely proves LOL Surprise! dolls work as advertised.

Williams’ video was not the first time someone objected to a feature of LOL dolls they saw as overtly sexualized.

In December 2019, myriad tabloids covered parental outrage at the dolls’ anatomically correct features. Larian commented on the backlash at the time:

Isaac Larian, CEO and founder of MGA Entertainment tells The Post that the design of the dolls’ privates is an intentional move from the company to include accurate body parts. “

Williams wasn’t even the first parent to question the cold water reveals of LOL dolls. In January 2019, a Reddit user posted on r/trashy about her daughter’s LOL doll, adding that the toddler’s LOL doll’s outfit “also makes her look like a hooker”:

My 3 year olds “ LOL Surprise doll” she got for Christmas. When you dip her in cold water her “secret spy outfit” shows up. Aka secret lingerie. And for whatever reason the nipples become extremely visible. The leopard print skimpy outfit she came with also makes her look like a hooker. from trashy

That post led to extensive discourse between users about anatomically correct dolls and the manner in which the LOL doll’s features appeared in their “surprise” form.

How LOL Dolls Are Marketed

Back in August 2018, the child-hosted YouTube channel “Sophie’s Play Day” did a long video  (“How to Find LOL Surprise Under Wraps Color Changing Dolls in Warm and Cold Water Series 4 Eye Spy”) specifically demonstrating how specific dolls reacted to being immersed in cold water. A description read:

Hi friends! In this video we will show you how to find the color changing Lol surprise dolls in series 4 under wraps eye spy.

Portions of the video showed the dolls’ plastic clothing changing color, and others showed unclothed dolls with color change properties: 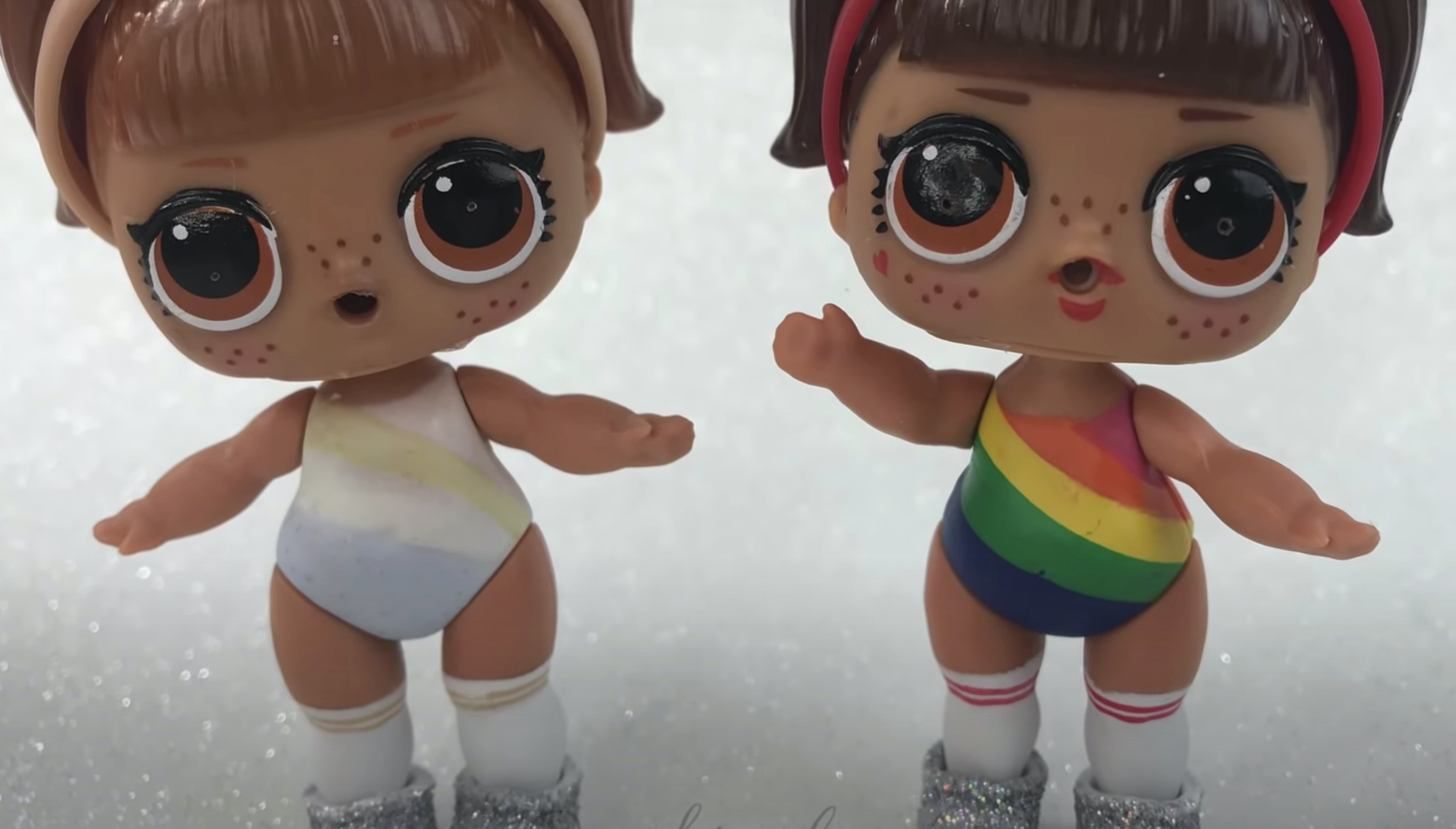 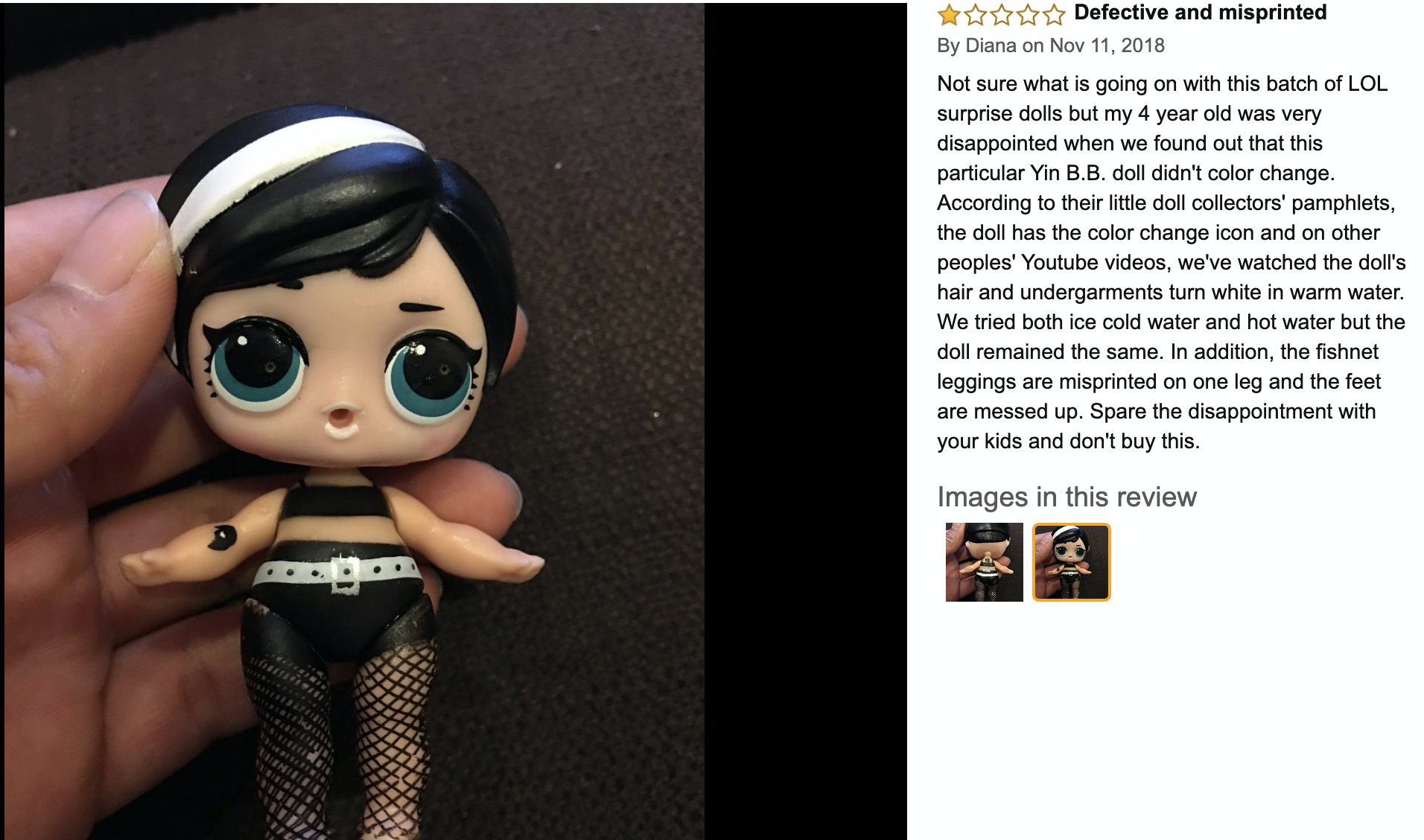 That same review was at the top of the page, and explained that buyers should expect the dolls to reveal “surprises” when immersed in water:

Not sure what is going on with this batch of LOL surprise dolls but my 4 year old was very disappointed when we found out that this particular Yin B.B. doll didn’t color change. According to their little doll collectors’ pamphlets, the doll has the color change icon and on other peoples’ Youtube videos, we’ve watched the doll’s hair and undergarments turn white in warm water. We tried both ice cold water and hot water but the doll remained the same. In addition, the fishnet leggings are misprinted on one leg and the feet are messed up. Spare the disappointment with your kids and don’t buy this.

A similar product, “L.O.L. Surprise! Lights Glitter Doll with 8 Surprises Including Black Light Surprises,” advised that children could bathe their dolls “for a water surprise, including color change.”

An August 11 2020 Facebook Live video tapped into a concurrent, COVID-19 related child trafficking panic — theatrically demonstrating that LOL Surprise! dolls without their clothes changed color when immersed in water, revealing underwear or a bikini. The user feigned shock, but anyone who has been asked to buy or bought the toys was likely aware their ability to change color (whether clothed or unclothed) is a major selling point. The feature described here involved unclothed dolls, necessitating the “surprise” be confined to something like underwear or a bathing suit. Although some naked LOL dolls genuinely changed color when immersed, framing the heavily-marketed feature as a shock was disingenuous — that trait was emphasized in every description of LOL Surprise! dolls of that subset.