Nearly one out of ten Americans think chocolate milk comes from "brown cows."

On December 9, 2018, the Facebook page “Unbelievable facts” shared the following meme, which held that nearly ten percent of Americans genuinely believed that chocolate milk was produced by brown cows: 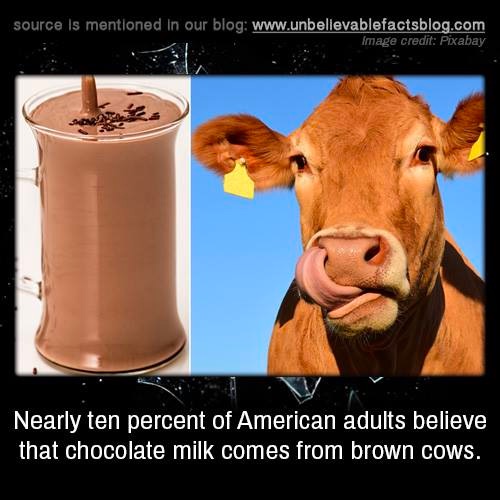 Users interested enough to go Googling for the provided citation at Unbelievable facts blog could locate the same meme, which featured a red button simply labeled “source.” That in turn linked to a June 2017 article in the UK-based Independent, “Nearly 10% Of American Adults Believe Chocolate Milk Come From Brown Cows, Finds Study.”

That article reported that a study had been conducted to reach alarming figures suggesting that a large contingent of Americans are perilously ignorant about the source of flavored milk:

In a study by the Innovation Center of US Dairy, it was found that seven per cent of Americans believe chocolate milk comes from brown cows. That works out at about 16.4m people.

These weren’t children either – the research was conducted on 1,000 people over the age of 18.

A whopping 48 per cent of people said they didn’t know where chocolate milk came from.

An article about the claim published one day prior by the Washington Post, “The surprising number of American adults who think chocolate milk comes from brown cows,” noted that the numbers actually came from a small online survey — not a “study” as claimed by the Independent:

Seven percent of all American adults believe that chocolate milk comes from brown cows, according to a nationally representative online survey commissioned by the Innovation Center of U.S. Dairy.

If you do the math, that works out to 16.4 million misinformed, milk-drinking people. The equivalent of the population of Pennsylvania (and then some!) does not know that chocolate milk is milk, cocoa and sugar.

But while the survey has attracted snorts and jeers from some corners — “um, guys, [milk] comes from cows — and not just the brown kind,” snarked Food & Wine — the most surprising thing about this figure may actually be that it isn’t higher.

The piece reiterated the initial claim from the Innovation Center for U.S. Dairy (a forum “that leverages the collective power of the dairy community to address the changing needs and expectations of consumers through a framework of shared best practices and accountability”) and lamented that the American public is increasingly and critically ignorant about the origins of its food:

One Department of Agriculture study, commissioned in the early ’90s, found that nearly 1 in 5 adults did not know that hamburgers are made from beef. Many more lacked familiarity with basic farming facts, like how big U.S. farms typically are and what food animals eat.

Experts in ag education aren’t convinced that much has changed in the intervening decades.

“At the end of the day, it’s an exposure issue,” said Cecily Upton, co-founder of the nonprofit FoodCorps, which brings agricultural and nutrition education into elementary schools. “Right now, we’re conditioned to think that if you need food, you go to the store. Nothing in our educational framework teaches kids where food comes from before that point.”

A prescient piece published by the New York Times’ Opinionator blog in 2013 discussed what actually constitutes a “study” (hint: not this milk thing).

An editor’s note added to the Washington Post piece also noted that a “previous version of this story incorrectly reported that the survey in question was commissioned by the National Dairy Council” when it “was actually commissioned by the Innovation Center of U.S. Dairy.”

So is the Innovation Center of U.S. Dairy a school, research body, or other organization devoted to collecting impassive data? According to its own website, its mission didn’t appear to be entirely academic in nature:

The Innovation Center for U.S. Dairy is a forum that leverages the collective power of the dairy community to address the changing needs and expectations of consumers through a framework of shared best practices and accountability.

In our search for information about the surprising “study” findings, we discovered a relevant article published by Columbia Journalism Review in June 2017. Although it didn’t seem to spread as far as the other articles did and spawned no memes, that outlet assessed the claim far more thoroughly than others:

The chocolate milk question was part of a survey, commissioned by a dairy advocacy group, ostensibly to gauge what Americans know about agriculture and food production. It turns out: not very much. It was a reminder of the importance of knowing where our food comes from, a topic that touches on other relevant issues, like the much-buzzed-about rural-urban divide and the modern economy.

By the following day, NPR had picked up the story, running with a similarly lighthearted take. Those tuning into All Things Considered heard hosts Ari Shapiro and Audie Cornish mix in audio clips from Jean Ragalie-Carr, president of the National Dairy Council:

RAGALIE-CARR: When we asked them, where does chocolate milk come from, they indicated that they thought it came from brown cows.

CORNISH: Jean Ragalie-Carr is president of the National Dairy Council, which commissioned the survey. She says they put that question to a thousand people and gave them several options for how to answer.

RAGALIE-CARR: Well, there was brown cows or black-and-white cows, or they didn’t know.

As CJR pointed out, the initial coverage failed to point out that the questions posed to those who commissioned the survey were misleading:

How exactly was the question phrased? Were those the only three options – two cow colors or “I don’t know”? And did this mean that even someone who plainly knew that chocolate milk was simply any milk that had been mixed with chocolate and sugar was not given the option of choosing anything resembling the correct response?

CJR’s digging revealed that the purported findings very strongly hinted at what became a successful bid for free press coverage, not a genuine attempt to gauge Americans’ knowledge of dairy distribution and bovine facts:

Like so many stories, it seems this one was originally hatched as a PR pitch. An advocacy organization, the Innovation Center for U.S. Dairy, commissioned the survey via a marketing firm, Edelman Intelligence, to kick off a campaign called Undeniably Dairy. A spokesperson for the Innovation Center told me the purpose of the survey was to “gauge some interesting and fun facts about consumers’ perceptions of dairy,” and the chocolate milk stat was apparently a winner. (She declined to respond to my queries about the wording of the questions, and said the full results of the survey were not intended to be published.) Food & Wine magazine was the first to bite, on June 1 (World Milk Day), but the ball didn’t really get rolling until the Post jumped in two weeks later.

CJR appeared to stand alone in basic questioning of a claim that was carried far and wide, oftentimes billed as a “study.” The meme above with the claim that “nearly ten percent” of American adults (actually seven percent of survey respondents, a number rounded up by a more-than-healthy margin) believed chocolate milk came from brown cows demonstrated how careless reporting encouraged that factoid to make its way to meme form, still circulating widely a year and a half later in December 2018. It doesn’t even appear anyone attempted to resolve fact that many people make chocolate milk at home from powder or syrup — and plain white milk.

In the end, the evidence to support of the claim that millions of Americans credited brown cows for their chocolate milk was already extremely thin. We contacted the Innovation Center for U.S. Dairy to reiterate questions initially unanswered during their first run of media mentions, but have not yet received a response.