An average of 22 veterans of the U.S. military take their own lives every day.

While seeking to boost awareness and help toward United States military veterans, a long-standing online claim and the various graphics promoting it are based on some misreporting of data regarding veteran suicide rates.

The claim often states that on average, 22 veterans kill themselves every day: 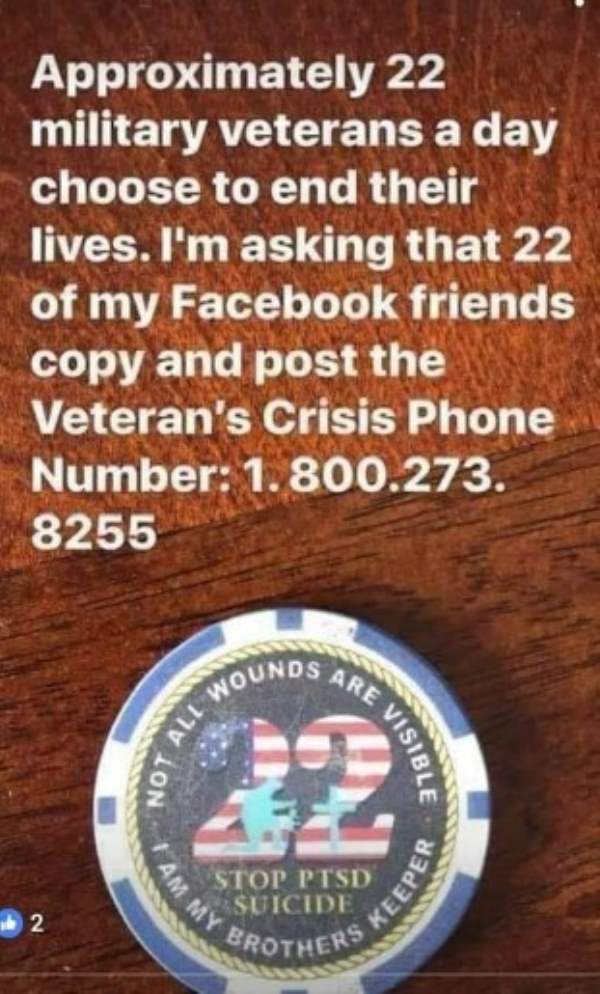 As the Los Angeles Times reported in 2013, the figure was taken from a study released that same year by the federal Department of Veterans Affairs (VA). The study said:

Among cases where history of U.S. military service was reported, Veterans comprised approximately 22.2 percent of all suicides reported during the project period. If this prevalence estimate is assumed to be constant across all U.S. states, an estimated 22 Veterans will have died from suicide each day in the calendar year 2010.

However, the VA’s researchers also noted that it used data provided from 21 American states — but not from California and Texas, two states with large veteran populations. The report analyzed a total of 147,763 suicides from those 21 states. Of those, 27,062 (or 18.3 percent) were “identified as having history of U.S. military service” on their death certificates.

According to the Times, the spread of the claim online also failed to account for both age and outside factors, and was instead conflated with discussions of U.S. military actions in Iraq and Afghanistan.

Many experts believe that the farther a veteran is from military service, the less likely it is that his or her suicide has anything to do with his or her time in uniform. In other words, many older veterans are killing themselves for the same reasons that other civilians in the same age group kill themselves: depression and other mental health problems coupled with difficult life circumstances.

A separate story in 2013 analyzed the death rate for veterans in California under the age of 35 between 2006 and 2011. The newspaper reported that out of 1,363 veteran deaths meeting that criteria, 329 were suicides.

“For every 100,000 young California veterans, there was an average of 27 suicides a year — 57 percent higher than the rate for active-duty troops over the same period,” the Times reported.

Taken nationally, the story added, that rate would mean that around 530 veterans under 35 were killing themselves per year, in an average of 1.5 suicides a day.

That’s probably an underestimate, because there are regional variations in suicide and California tends to fall on the low side… But in talking about the aftermath of the wars in Iraq and Afghanistan, it’s far closer to reality than 22 each day.

The VA further clarified its findings regarding suicide in July 2018, when it released a separate study that did include data from all 50 states, as well as the District of Columbia. The report also stated, however, that its 2012 predecessor included suicide data for active service members, National Guard members and reservists alongside non-active veterans.

The latest report determined that between 2005 and 2015, on average 16.8 veterans and 3.8 active-duty service members killed themselves every day.

“The key message is that suicides are elevated among those who have ever served,” the National Center for Veterans Studies executive director Craig Bryan told the military news organization Stars and Stripes. “The benefit of separating out subgroups is that it can help us identify higher risk subgroups of the whole, which may be able to help us determine where and how to best focus resources.”