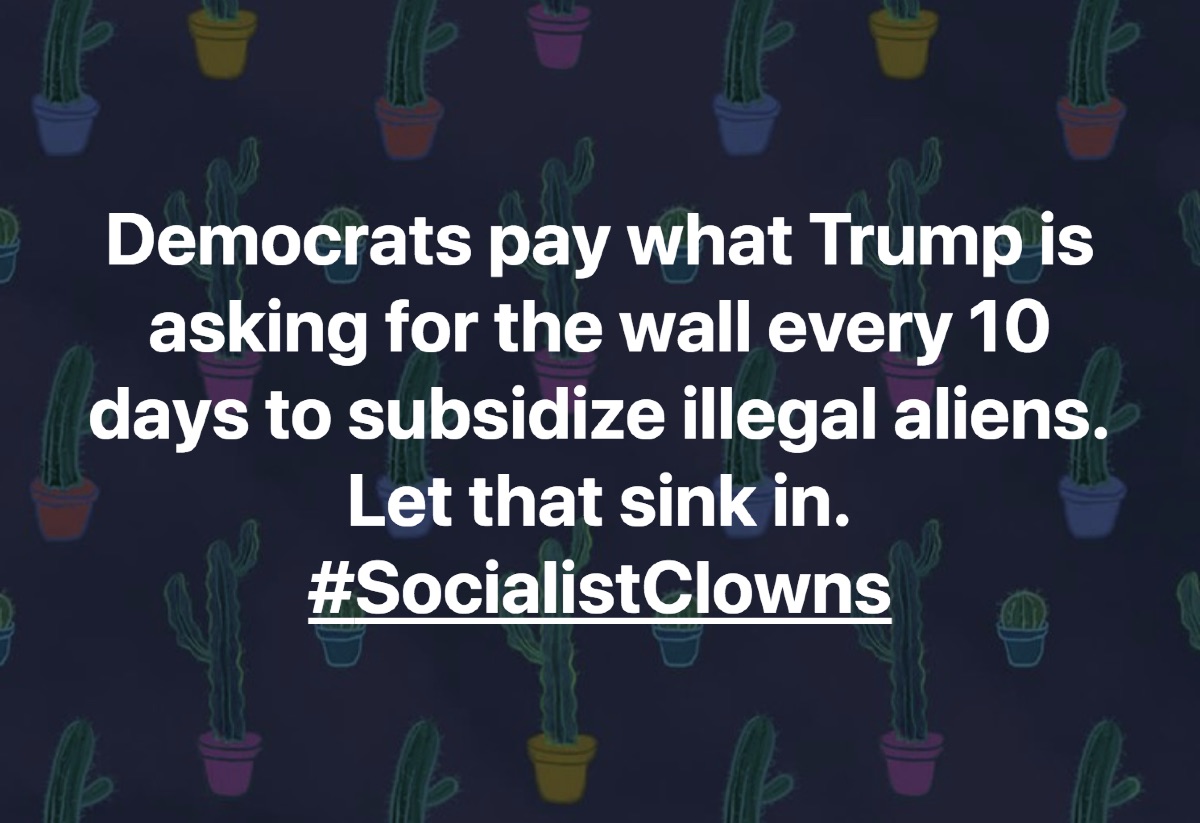 Democrats pay what Trump is asking for the wall every 10 days to subsidize illegal aliens.

Let that sink in. #SocialistClowns

The status update was shared during the 2018-2019 government shutdown, which rested largely on United States President Donald Trump’s request for $5.7 billion dollars in funding to construct a border wall. The figure made it relatively straightforward to further parse its claim, as it stated that the cost of “illegal immigration” amounted to $5.7 billion every ten days — or $570 million a day.

That figure represented a staggering amount, but thousands of readers found it plausible enough to share from the group in which it was originally posted. Of course, no source for the figures accompanied the claim, so we went off in search of the basis of the claim.

Was President Donald Trump himself responsible for the claim? That seemed plausible, but in 2016 PolitiFact checked a statement he made about the annual cost of immigration. In that version, then-candidate Trump had insisted that “illegal immigration costs our country more than $113 billion a year.” If that number was correct, the cost every ten days would be a still-staggering but entirely different $3,095,890,410.96 (three billion, 95 million, 890 thousand, 410 dollars … and 96 cents).

PolitiFact rated the figure “mostly false,” but even if it was “mostly true” or “true,” the statement we are examining would be false based upon it. PolitiFact used figures provided by the Federation for American Immigration Reform (FAIR), a group that started out as part of a network of population control advocacy organizations and which is now designated by the Southern Poverty Law Center as a hate group. The Associated Press also consulted FAIR for a December 5, 2018 fact check undertaken in response to a tweet published by Trump one day previously. They also offer the highest estimates of the costs of unauthorized immigration that we could find, so we are using their numbers.

In the tweet, Trump maintained that the United States lost enormous amounts of money to unauthorized immigration:

Could somebody please explain to the Democrats (we need their votes) that our Country losses 250 Billion Dollars a year on illegal immigration, not including the terrible drug flow. Top Border Security, including a Wall, is $25 Billion. Pays for itself in two months. Get it done!

For those keeping a tally, $250 billion annually works out to $684,931,506.85 every ten days — 684 million, 931 thousand, 849 dollars. And 85 cents. Again, President Trump’s own very-high estimates varied tremendously from the $5.7 billion every ten days claim. How much did they differ? The number cited in the meme was eight times higher than the number claimed by President Donald Trump one month earlier.

So was the $250 billion annual cost true, and the meme false? Or vice versa? According to both Donald Trump in 2016 and the anti-immigration group FAIR when they spoke to the Associated Press in 2018, no:

“I’m not sure where the president got his numbers,” said Dave Ray, a spokesman for the nonprofit group FAIR, the Federation for American Immigration Reform, which advocates for lower immigration numbers.

Neither the White House nor the Department of Homeland Security responded to questions Tuesday about where the $250 billion estimate had come from.

The Heritage Foundation, for instance, estimated in 2013 that households headed by immigrants living in the U.S. illegally impose a net fiscal burden of around $54.5 billion per year.

And even Trump himself has contradicted the figure. During his 2016 campaign, Trump claimed that illegal immigration cost the country more than $113 billion a year — less than half the number he tweeted [in December 2018].

The claim that the every-ten-days cost of “illegal immigration” totaled $5.7 billion is false by any metric. Not only is it false on its own merits, but it is false based on numbers provided by U.S. President Donald Trump himself — which were subsequently disputed by an anti-immigrant group who were left “scratching their heads” when asked about the figures he cited.