Cellular phones contain an "E911 chip" that allow the federal government to access your most sensitive information with alerts.

Testing for a new cellular phone alert system (the Integrated Public Alert and Warning System, also known as IPAWS) began on October 3rd, 2018, with a tone and a message sent across mobile networks.

The grumbling began almost immediately, as startled or irritated Americans reacted to the unsolicited (but anticipated) test, but the griping turned into conspiracy theorizing almost immediately, when John McAfee (of antivirus fame) claimed that the tone that accompanied the alert activates a special chip in 4G phones: 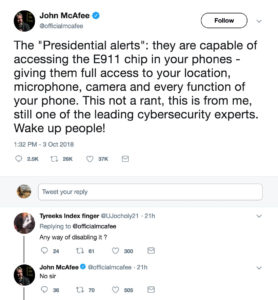 The “Presidential alerts”: they are capable of accessing the E911 chip in your phones – giving them full access to your location, microphone, camera and every function of your phone. This not a rant, this is from me, still one of the leading cybersecurity experts. Wake up people!

First, McAfee said “your phones,” but then later backtracked, claiming he meant 4G devices only and advising people to only use models from 2013 or earlier. 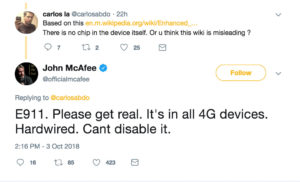 Cybersecurity experts instantly challenged McAfee’s claims on a very simple basis: The “e911 chip” does not exist. “Just for the record,” tweeted British security expert Kevin Beaumont, “there’s no E911 chip in your phone as there’s no such thing as an E911 chip. And that’s just beginning of the first sentence of John’s tweet.”  (“Oh god,” he tweeted a few hours after that, “People are sharing that stupid John Mcafee E911 chip tweet on my Facebook feed too (and I don’t have any InfoSec friends there), it’s going viral.”)

The claim was perhaps given a boost by an unrelated Bloomberg report that came out the next day, which detailed how China used tiny chips embedded in hardware manufactured within the country in order to eavesdrop on information, infiltrate companies, and intercept high-level government missives and corporate secrets. It’s also true that Enhanced 911, or E911, has existed for years and as of 2015 is being integrated into all traditional 911 calls to help with location services, but it is not contingent on any one special chip. Additionally, there’s no reason any sort of “presidential alert” would be needed to activate such a chip.

But this was unrelated to McAfee’s claims, for which he has offered little proof — although that didn’t stop some organizations, like Russian state-run networks, from running uncritically with the story regardless. McAfee also did not elaborate on the fact that no chip is needed to send information to companies or government entities, segueing instead to promoting a planned United States presidential run on the Libertarian ticket — and suggesting that security was perhaps, in this case, not his actual concern.

However, since it is frustratingly difficult to prove the nonexistence of something across the board, we rate this statement Unknown.