As a juror, you have the right to refuse to enforce any bad law in the case brought before you. 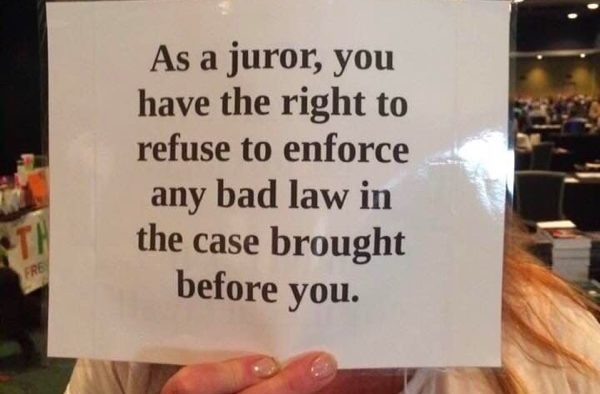 As a juror, you have the right to refuse to enforce any bad law in the case brought before you.

In the comments section, one user shared a screenshot of the Wikipedia entry for jury nullification, and another wrote: “Don’t say this during jury selection.”

The referenced practice is known as “jury nullification.” The practice (while perhaps not well known) is well documented in legal texts like Cornell University’s online law library:

Jury nullification is a discretionary act, and is not a legally sanctioned function of the jury. It is considered to be inconsistent with the jury’s duty to return a verdict based solely on the law and the facts of the case. The jury does not have a right to [nullification], and counsel is not permitted to present the concept of jury nullification to the jury. However, jury verdicts of acquittal are unassailable even where the verdict is inconsistent with the weight of the evidence and instruction of the law.

As the brief definition suggested, jury nullification is a legitimate option for jurors — but it is not without complication. That entry described the route as a “discretionary act … inconsistent with the jury’s duty to return a verdict based solely on the law and the facts of the case.” The sign also said that a juror has “a right to refuse to enforce any bad law,” but Cornell’s reference document said a “jury does not have a right” to nullification. In short, and as with most legal concepts, it’s complicated.

In November 2018, Law.com’s “The Recorder” published an article (“On Appeals: The Unspoken Power of Jury Nullification in the Context of Conflicting State and Federal Law.”) in which litigator Susan Yorke described jury nullification as a “vital check on government power” as well as a “legal problem child,” concluding with a series of questions rather than answers:

Few topics provoke as much consternation among lawyers and law students as jury nullification. It’s a legal problem child—serving as a vital check on government power while simultaneously undermining the very premise of our adjudicative system. And what can trial courts tell juries about this unruly creature, which fits so poorly into the rubric of the judiciary? That’s precisely the question faced by the U.S. Court of Appeals for the Ninth Circuit Court in the recent case of United States v. Lynch.

The Lynch case thus highlights several outstanding tensions. If a jury has the power to nullify but no right to do so, can it be told that it is forbidden from nullifying? And if a defendant has a right to trial by jury but no right to ask that jury for nullification, is trial by a jury stripped of its nullification power fundamentally unfair? How can a reviewing court tell when an improper instruction is harmless, and should harmless error analysis even apply under these unique circumstances? Just as jury nullification fits uneasily into our process for adjudicating guilt, trial errors springing from the abridgment of that power do not lend themselves to straightforward appellate review.

In January 2018, The Volokh Conspiracy offered more analysis (via Reason.com):

Jury nullification occurs when jurors acquit a defendant who they believe to be guilty because they conclude that the law he or she violated is unjust or carries overly harsh penalties. Pulliam’s main concern is that nullification could undermine the rule of law[.]

There is some truth to this argument. Relative to a system where laws really are “uniformly applied, without excessive discretion,” jury nullification can indeed undermine the rule of law. This sort of consideration is one of the reasons why I used to oppose jury nullification myself. But, sadly, we do not in fact have such a system. In the real world, law enforcement is already characterized by wide-ranging discretion, because we have vastly more laws than we can possibly enforce – and vastly more violators thereof than the authorities can possibly go after.

In 2011, Eugene Volokh quoted a New York Times piece saying that jury nullification remains highly controversial, and courts are hostile to it. Volokh added that sanctions imposed on a person spreading information about jury nullification was unconstitutional, in the context of the 2011 indictment of an advocate of the practice on charges related to jury tampering:

It seems to me that such speech is constitutionally protected, and that the indictment therefore violates the First Amendment. One can debate whether jury nullification is good or bad for the legal system, but it’s clear that it’s not a crime for jurors to refuse to convict even when the jury instructions seem to call for a guilty verdict. So [Julian] Heicklen is encouraging a jury to engage in legal — even if, in the view of some, harmful — conduct.

The case involving Heicklen is not the only instance of someone being sanctioned for informing others of the concept. A 2017 piece in Justia’s Verdict examined a case wherein a juror was purportedly charged and convicted on charges of contempt after a fellow juror informed the case’s judge that she introduced jury nullification to her fellow jurors.

Yet another perspective from a law professor was published in USA Today in 2015, arguing that the concept was granted outsized importance in discussions relating to justice — not because it is necessarily ineffective, but due to the ubiquity of plea bargains:

Of course, prosecutors have essentially the same power, since they’re under no obligation to bring charges against even an obviously guilty defendant. But while the power of juries to let guilty people go free in the name of justice is treated as suspect and called “jury nullification,” the power of prosecutors to do the exact same thing is called “prosecutorial discretion,” and is treated not as a bug, but as a feature in our justice system. But there’s no obvious reason why one is better than the other. Yes, prosecutors are professionals — but they’re also politicians, which means that their discretion may be employed politically. And they’re repeat players in the justice system, which makes them targets for corruption in a way that juries — laypeople who come together for a single case — aren’t.

Nowadays, jury nullification is less important because, as I recently wrote in the Columbia Law Review, so few cases even go to a jury anymore. Instead, prosecutors draft massive “kitchen sink” indictments charging dozens or hundreds of crimes, then bludgeon defendants into accepting a plea bargain rather than risk a trial in which conviction on even a single count out of hundreds of charges could be disastrous. A different kind of jury — the grand jury — is supposed to discipline prosecutors on indictments, but in practice, they’ve turned into rubber stamps for the most part.

The sign in the image above says that “as a juror, you have the right to refuse to enforce any bad law in the case brought before you.” On a very basic level, legal experts agreed that is true; jury nullification is a well-known concept in the justice system. But analysts frequently examined the concept in a broader legal context, exposing a host of issues. Advocates of the practice can be and have been charged with tampering or contempt, depending on circumstances under which they introduced the concept. One law professor said that the prevalence of plea bargains renders the practice essentially moot as it relates to the vast majority of indictments.

The sign is accurate, but in and of itself it lacks necessary context for an informed decision.