Hand sanitizer, in wider use during a coronavirus pandemic, is fatal to dogs and other pets because it contains the same ingredients as antifreeze.

On March 14 2020, a Facebook status update (archived here) claiming that pet owners should be aware that hand sanitizer “has the same ingredients as antifreeze” went viral after an uptick in hand sanitizer use due to an ongoing COVID-19 outbreak that has become a global pandemic:

White text against a purple background (with skulls for added effect) read:

PET OWNERS PLEASE BE AWARE THAT HAND SANITIZER HAS THE SAME INGREDIENTS AS ANTIFREEZE. DON’T LET ANIMALS LICK IT OFF YOUR HANDS IT CAN KILL

As we’ve noted in many, many previous fact-checks, images generated in text-based Facebook status updates remained a breeding ground for disinformation on that platform. People can create highly shareable graphics with just a few clicks, and the character limitations are such that linked citations rarely accompany these easy-to-share posts.

In this particular case, going on 300,000 people shared the post in under three days. That is more than a quarter million people (and likely many more who saw it and didn’t pass it on), all of whom were exposed to a claim tacitly working to demotivate the use of hand sanitizer in the early days of the COVID-19 global pandemic.

Pet owners might read the post and think that to “be on the safe side,” eschewing hand sanitizer in favor of the implicitly safer act of washing ones hands. But — while soap and water is perfectly effective at killing the novel coronavirus — hand sanitizer is pocket-portable and sinks aren’t, so those heeding such advice might be more susceptible to both contracting and spreading the virus which causes COVID-19 (SARS-nCOV-2).

But as many commenters noted, hand sanitizer in large commercial dispensers was a common sight at animal shelters as well as at veterinarian’s clinics. Surely, these organizations would be aware of the purported risk posed to pets and insist on hand-washing — but they don’t. Guidelines exist for use of hand sanitizer in such environments, in part to ensure the safety of handled dogs and cats. 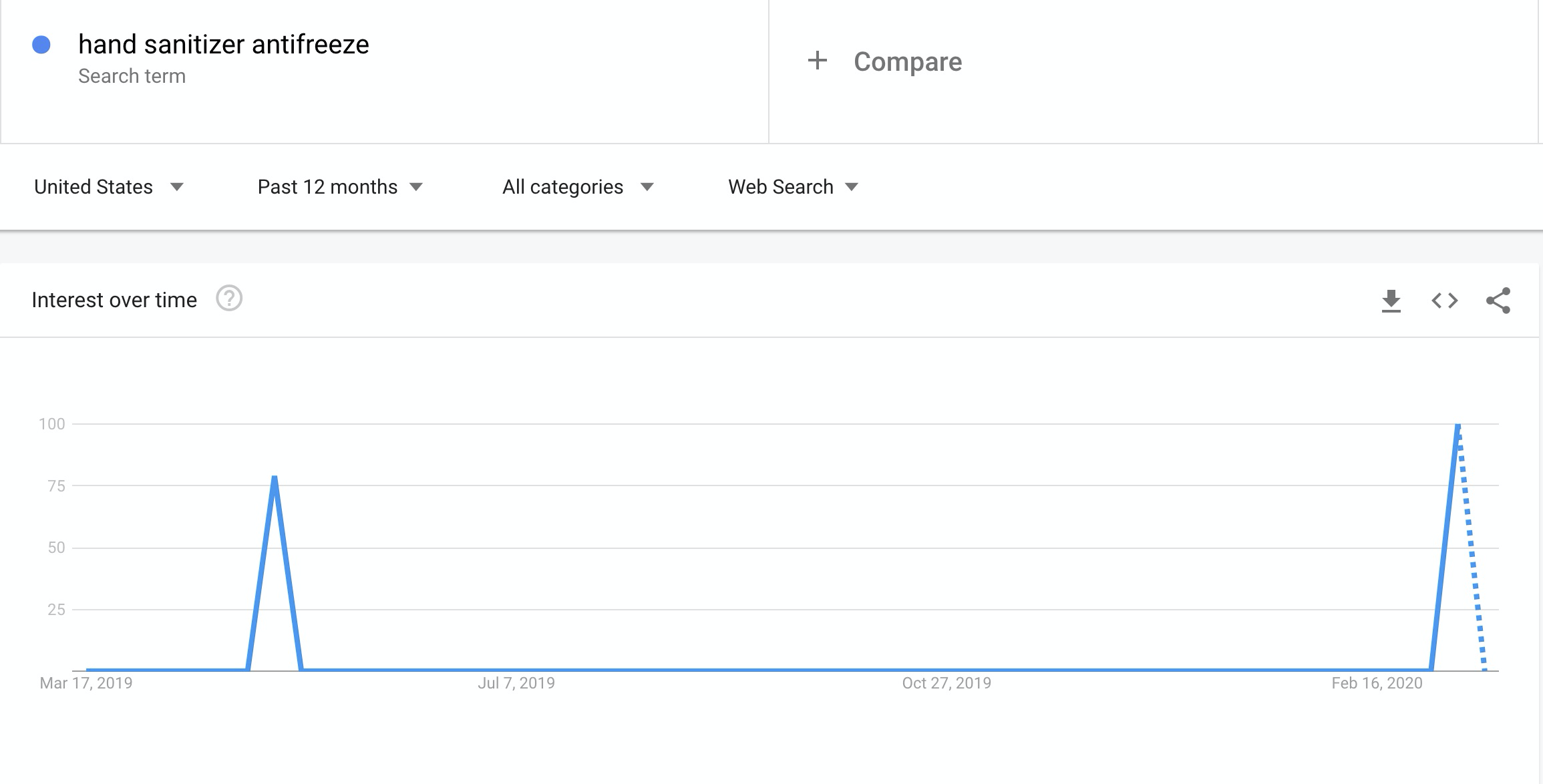 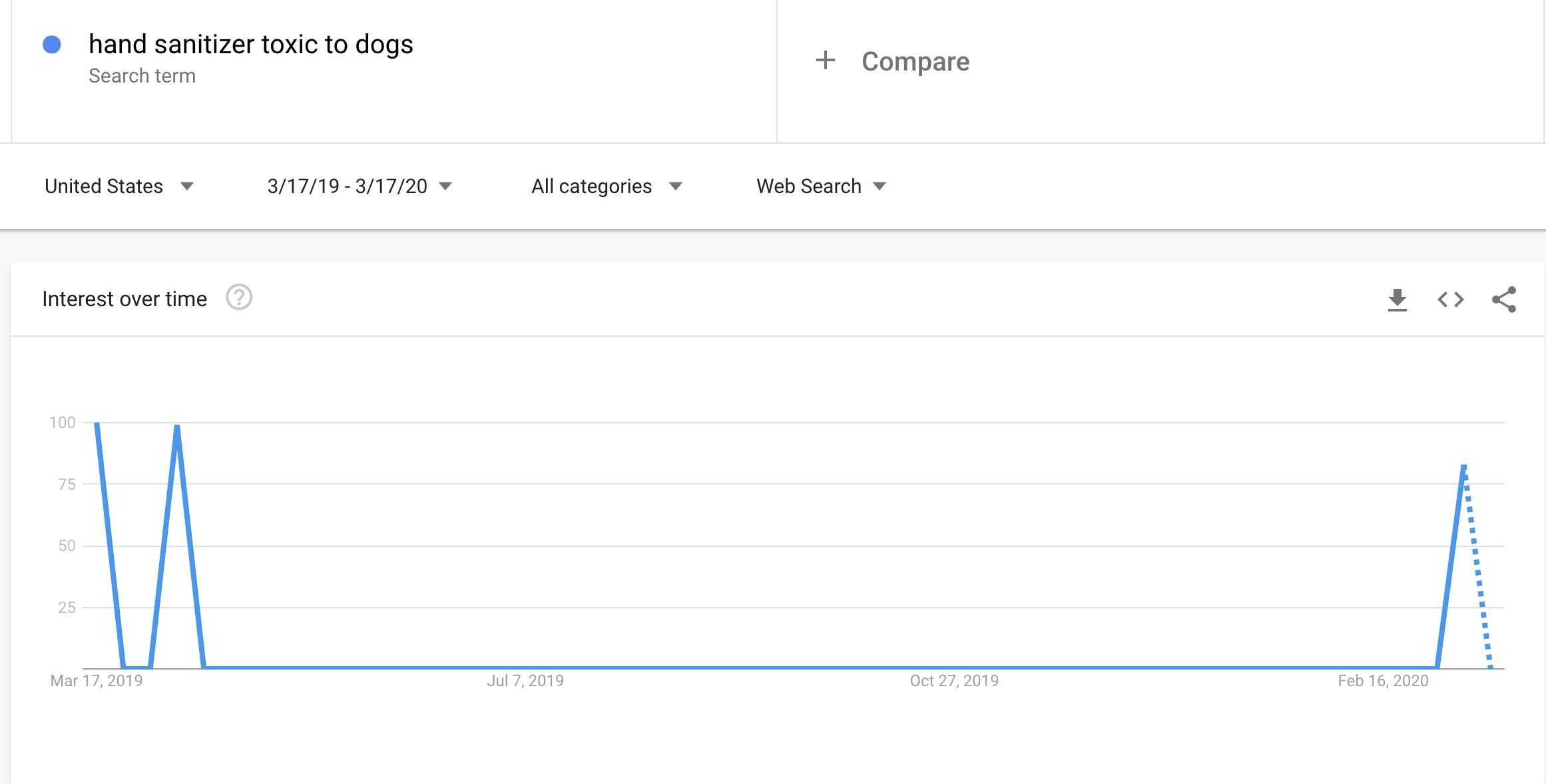 As of mid-March 2020, searches for “hand sanitizer ingredients” generally returned not material safety data sheets (MSDS), but recipes on how to make one’s own hand sanitizer at home. In one context, that arrangement of information fit a need (people in need of hand sanitizer home-brewing their own), but it also pushed down results which might assist concerned dog owners in determining whether the newly-vital product posed a risk.

Some news organizations advised against “bathtub gin” versions of Purell:

The shortages and buying limits have spurred people to make their own hand sanitizer using recipes from Twitter, Reddit, Pinterest, countless blogs and even a pharmacy. But just because these recipes exist doesn’t mean you should follow them … experts caution that making homemade hand sanitizer is harder than it seems. If you don’t get the concentration right, experts warn that you’ll end up with something that isn’t effective or is too harsh, and is a waste of ingredients.

Worried searchers might also stumble upon an unrelated study reporting that hand sanitizer and antifreeze were capable of preserving DNA. It should be noted that a shared trait between the two is not the same as evidence that these products carried similar risks to humans and pets.

Most pet owners were aware that antifreeze, even in small concentrations, could prove fatal to pets. Washington State University College of Veterinary Medicine’s page on antifreeze poisoning in pets explained that “dogs and cats find antifreeze quite tasty and if they find antifreeze they’ll drink it,” further noting:

Very small amounts of antifreeze can be fatal. If a cat walks through a puddle of antifreeze and then licks its paws, it can ingest enough antifreeze to cause death. About five tablespoons can kill a medium sized dog. If you see your pet drinking antifreeze, or are at all suspicious that your pet may have had access to antifreeze, contact a veterinarian immediately. Signs of antifreeze poisoning depend upon the time after ingestion. In the first few hours after ingestion the pet may be depressed and staggering and may have seizures. They may drink lots of water, urinate large amounts and vomit. The pet may appear to feel better but in a day or two get much worse as the kidneys fail. Signs of kidney failure include depression and vomiting. The amount of urine they pass will often decrease to a very small amount.

Risks posed to pets by antifreeze existed in part due to its sweet taste, which has poisoned pets and humans alike. As the previous excerpt said, pets are likely to lick pooled or spilled antifreeze for that reason — a byproduct of ethylene glycol as a main ingredient:

Ethylene glycol is the ingredient that makes antifreeze tasty. Though colorless and odorless, the syrupy alcohol derivative—which is excellent at lowering the freezing points of vital engine fluids—has a sweet taste that jibes well with soda, juice, and other sugary beverages. As many concerned pet owners and parents are well aware, dogs, cats, and kids are prone to lap up puddles of antifreeze left on garage floors. Every year, 90,000 animals and 4,000 children ingest the toxic liquid; if not treated immediately, the consequences of the poisoning can include renal or cardiovascular failure, brain damage, and death.

Pet Poison Helpline notes that hand sanitizer can be toxic to pets, but the context included was vitally important:

Many hand sanitizers claim to kill almost 100 percent of germs, and this is possible because they contain high amounts of alcohol (ethanol) – sometimes up to 95 percent. Therefore, when a dog ingests a small bottle of hand sanitizer, it can have the same effect as a shot of hard liquor. This can cause a severe drop in blood sugar, incoordination, a drop in body temperature, neurological depression, coma and death.

In that particular item, Pet Poison Helpline referenced the consumption of an entire bottle of hand sanitizer and it being equivalent to the ingestion of “a shot of hard liquor.” Trace amounts on human hands were not a risk factor cited in this context.

Pet Poison Helpline also featured an entry specifically for hand sanitizer and pet health, where a key contrast with antifreeze was apparent:

You don’t need to be a dog or cat to know hand sanitizer is indeed unpalatable; all you have to be is a person who accidentally ingested some Purell at some point in your life. But in those excerpts, it is apparent that ethylene glycol is the ingredient that makes antifreeze specifically toxic to pets (and their humans.)

According to the Centers for Disease Control and Prevention (CDC), ethylene glycol is a “useful industrial compound found in many consumer products, including automotive antifreeze, hydraulic brake fluids, some stamp pad inks, ballpoint pens, solvents, paints, plastics, films, and cosmetics; it also is used as a pharmaceutical vehicle.” That fact sheet did not indicate that ethylene glycol is present in hand sanitizer. On a MSDS for Purell provided by Staples [PDF], ethylene glycol was not listed as an ingredient of that common brand of hand sanitizer.

A viral Facebook post claiming that hand sanitizer has the same ingredients as antifreeze and is thus potentially fatal to pets is a great example of bad information spreading virally during a crisis such as a pandemic, and sanitizer was one of the primary ways people without access to hand-washing facilities might stave off coronavirus exposure, and the post potentially frightened people away from using it. Antifreeze is specifically and notably dangerous because it tastes “sweet,” and many pets know no better than to consume it. By contrast, hand sanitizer is unpalatable. Trace amounts of hand sanitizer on human hands does not pose a risk to pets, only consumption of a relatively large amount of hand sanitizer, such as a small bottle — which is unlikely due to its unpleasant taste.