A national four-week quarantine will start on April 1 2020, affecting the entire population of the United States.

In mid-March 2020,  completely unsubstantiated but frightening rumors began circulating about a four-week-long quarantine blanketing the entire United States, purportedly to begin on April 1 2020.

The rumor spread from person to person in individual posts versus moving from one centralized location, often described as information originating with “the Pentagon.” Although minor details changed in some variations, certain elements remained the same:

The four-week quarantine rumor spread on Twitter, often citing an “unknown source” inside the Pentagon or another agency:

Supposedly we’re going on a 4-week quarantine April 1st? Erik’s birthday is April 7 so he told me to stay with him those four weeks and I said say less 🤪🤪✌🏼 pic.twitter.com/dG5qZw2ohY

Some versions of the rumor also appeared on Reddit conspiracy subreddits, such as r/conspiracyundone:

Under quarantine we will stay home as much as possible. I believe you will still be able to leave your house in most cities but there will be checkpoints where you will have to show Identification. You may even be able to go to the store if any are open but you will be encouraged to stay home. You should have extra supplies and food on hand and as we can see the public is already doing this but they think it’s because of a virus. Its not.

Individually circulating iterations of the four-week quarantine rumor attributed information to a “friend of a friend (FOAF)” at Homeland Security, the Air Force, or some other agency — details that created an impression the same information was emanating from various presumably credible sources. In actuality, those attributions were just features of the same rumor, added indiscriminately to add a sense of authoritative origin:

Also i am hearing from friends and seeing posts about a 4 week quarantine coming and it's a lot fo rumors about "my friends fbi friend" or "someone I know in the pentagon" and it explicitly saying to stock up. This is only causing more fear and panic buying!!! Please do not share

There -is- a rumour -supposedly- that the Pentagon is considering attempting a 4 week self imposed quarantine. This rumor coming from a co-worker (I work in federal gov) who supposedly has a friend that works in the Pentagon. That's a MASSIVE undertaking though, & unlikely

A “friend of a friend” (or FOAF) is also a common feature in folklore. As with the references to federal agencies and military branches, attributing unsourced information to a friend of a friend implies baseless rumors were obtained from a trusted source — not directly known to the teller, but known through mutual acquaintances.

On Facebook, people shared versions of the same message to profiles and groups. Toggling to image results returned an array of previews for a Google Docs link often shared alongside the posts: 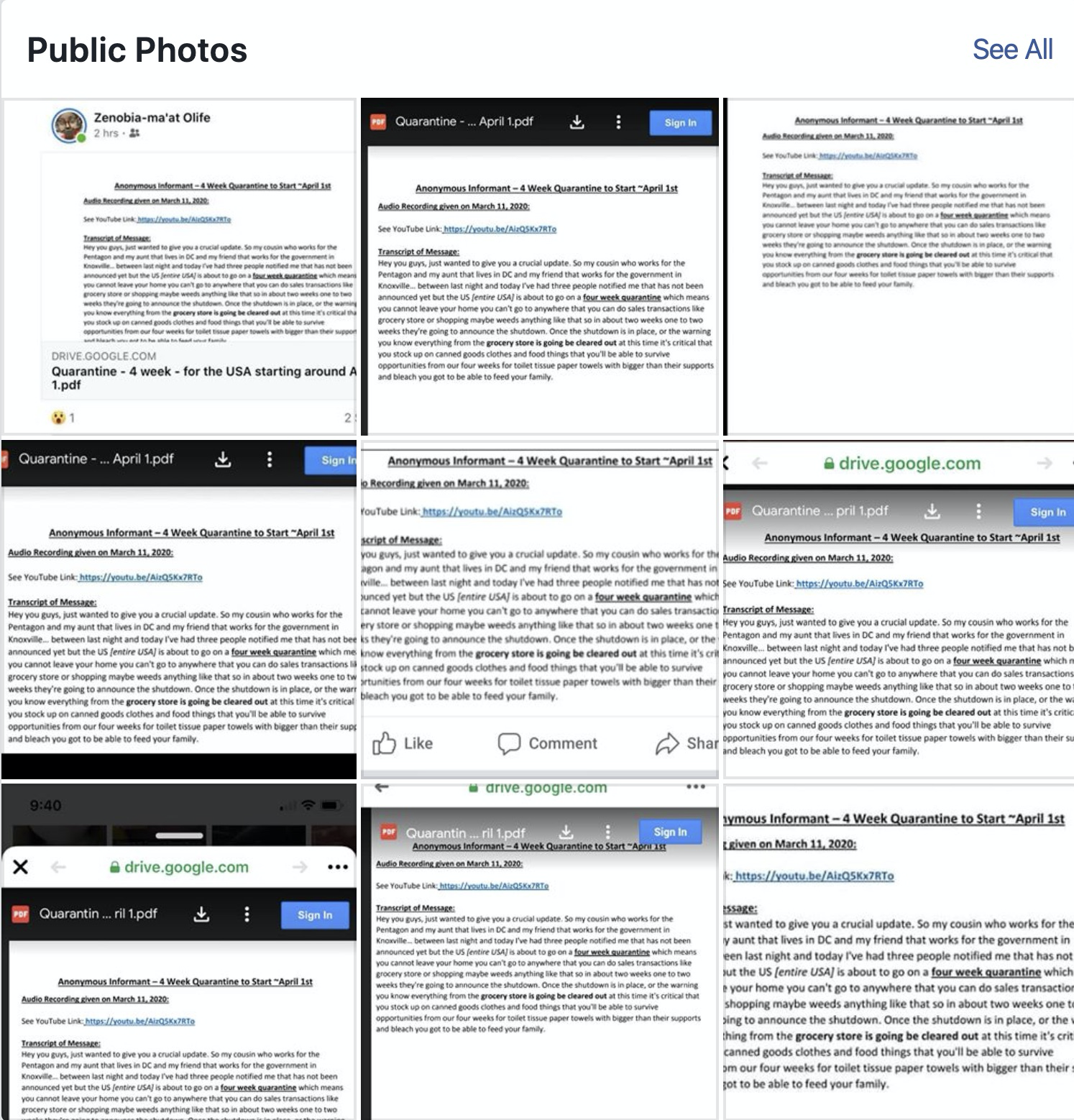 A PDF anonymously uploaded to Google Docs was often added to the results shown here; it displayed a date of March 11 2020, but it’s not clear exactly when the message began circulating. It read:

Transcript of Message:
Hey you guys, just wanted to give you a crucial update. So my cousin who works for the Pentagon and my aunt that lives in DC and my friend that works for the government in Knoxville… between last night and today I’ve had three people notified me that has not been announced yet but the US [entire USA] is about to go on a four week quarantine which means you cannot leave your home you can’t go to anywhere that you can do sales transactions like grocery store or shopping maybe weeds anything like that so in about two weeks one to two weeks they’re going to announce the shutdown. Once the shutdown is in place, or the warning you know everything from the grocery store is going be cleared out at this time it’s critical that you stock up on canned goods clothes and food things that you’ll be able to survive opportunities from our four weeks for toilet tissue paper towels with bigger than their supports and bleach you got to be able to feed your family.

Syntax in the message was bizarre, and a link to a YouTube video was included; as of March 17 2020, that video (uploaded on March 11 2020 by a channel called “444 Prophecy News”) had been viewed nearly 100,000 times. Although the clip circulated as a video, it was in fact an audio message circulating in various forms on numerous platforms.

A description for the YouTube iteration linked above indicated outright that it narrated a circulating text/email — words then transcribed on Google Docs as read above:

I got this recording on an email today March 11, 2020. Person speaking is anonymous Please share and prepare best you can

Again, variations between these iterations created a false impression that numerous individuals with myriad connections to various federal agencies were spreading information from multiple sources. In actuality, the YouTube clip and the Twitter screen video below were completely identical, a single audio recording of a forwarded text or email:

Listen and share US to go on a 4 week shutdown for quarantine. pic.twitter.com/57Pnz6ISqg

The clips were narrated by the same woman (likely less an “anonymous informant,” but a recipient of the text), who seemed in essence to be dictating a circulating text message and/or leaving the content of the message as a voicemail:

So my stepdaughter forwarded me an audio file of a woman claiming that her cousin, who works at the Pentagon, & her friend who works for the CDC, are saying we are about to face a mandatory 4-week full quarantine. No work or stores. Nowhere at all. Real or BS?

To reiterate, all of these messages were originating from one single circulating text or email, not numerous federal government insiders, something apparent when viewing iterations from social media platforms.

News of the virally spreading four-week quarantine rumor made it to the White House National Security Council on Twitter by March 15 2020, when the account addressed and debunked the rumor:

Text message rumors of a national #quarantine are FAKE. There is no national lockdown. @CDCgov has and will continue to post the latest guidance on #COVID19. #coronavirus

If you use social media, chances are you saw or heard a rumor that a Pentagon insider advised of a four-week quarantine planned for the United States, and starting on April 1 2020. The National Security Council described the rumor of a pending four-week quarantine a hoax, stating that there was “no national lockdown” being planned. The NSC advised Americans to follow the Centers for Disease Control and Prevention for credible updates on COVID-19.