Jen Psaki has a brother who works for the hedge fund Citadel LLC.

As discourse and debate surrounding online trading in general and the app Robinhood in particular continued to spread in January 2021, some right-wing social media users attempted to link it to new White House Press Secretary Jen Psaki, claiming that she had a familial link to the controversy.

Specifically, they began pushing the claim that Psaki would not disclose that she had a brother who worked for Citadel LLC, a hedge fund accused of forcing the app to stop trading activity for Gamestop stocks — the focal point of the upheaval in trades driven by retail buyers: 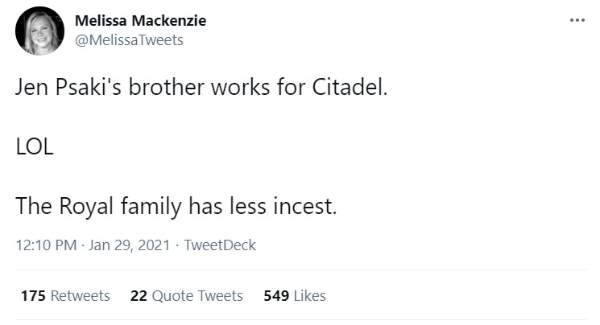 Recent articles profiling Psaki did not mention a brother. But the proof, these accounts argued to push their narrative, was a 2017 article in Yahoo! News on a trio of new hires for Citadel:

Jeff Psaki, who previously worked under Felder at Magnetar, is expected to join later this year leading the credit component of the strategy, according to people familiar with the matter. Psaki most recently worked at Magnetar as a portfolio manager and head of credit, within the firm’s fundamental strategies unit. He earlier worked at Goldman Sachs and Barclays.

Some also pointed to a screenshot of an edit for Psaki’s Wikipedia page showing that a section listing Jeffrey Psaki as her brother had been removed:

But a look at the full edit history for that page shows that that listing was only added on January 29 2021, illuminating clear attempts to push a specific narrative:

That change was undone by a Wikipedia editor who added, “we don’t report non-notable relatives.”

From there a debate broke out, with the editor advising “I’m sure a lot of people are mentioned in Yahoo, that does not make them notable, please gain consensus to include.”

A separate user who is not listed as active responded, “As a minority, my voice is that of the unheard; I am the consensus therefor [sic].”

The page was later listed as “protected,” citing violations of Wikipedia’s policies regarding biographies of living persons, which states:

We must get the article right. Be very firm about the use of high-quality sources. All quotations and any material challenged or likely to be challenged must be supported by an inline citation to a reliable, published source. Contentious material about living persons (or, in some cases, recently deceased) that is unsourced or poorly sourced—whether the material is negative, positive, neutral, or just questionable—should be removed immediately and without waiting for discussion. Users who persistently or egregiously violate this policy may be blocked from editing.

We have been unable to reach the White House press office for comment on the allegation.