As shares of $GME (and $AMC and $NAKD) spiked, Robinhood forcibly sold privately and individually held shares without shareholder consent.

During the late January 2021 GameStop ($GME) short squeeze, trading app Robinhood came under fire for halting the buying only (not selling) of popular tickers — and anecdotal reports began filtering into the news cycle that Robinhood was, in addition to preventing the sale of $GME, $AMC and other tickers, forcibly selling stock and closing positions for traders without their consent:

Robinhood is SELLING people’s GameStop shares WITHOUT their consent. from wallstreetbets

The post above was shared to r/wallstreetbets on January 28 2021, and a top-level comment claimed that users with margin (funds borrowed from Robinhood) enabled were at risk of having their positions closed by the trading app:

yup, if you bought on margin, they tightened it up, and ‘chose’ to sell GME at it lowest point today to cover.

On January 29 2021, a widely-shared screenshot was posted on r/ClassActionRobinHood:

In the screenshot, an email or message titled “Important Information About Your Robinhood Account” was shown. A purported recipient’s name was redacted, but the message contained information sufficiently specific to recognize a number of variations involving the same message, which began:

In light of recent volatility, we are restricting transactions for certain securities to position closing only. However, due to the unreasonable risk involved in brokering your position, we have closed your 4,500 shares of GME for an average price of $118.93 on January 28th, 2021 at 11:24 AM.

In light of current market volatility, we are restricting transactions for certain securities to position closing only, including $AMC and $GME. Read more here.https://t.co/CdJMjGAeFH

Depicted graphs showed a predictable dip in the price of shares of $GME and other affected tickers, and the price plummeted after that 9:50 AM peak. By 11:10 AM, $GME had plummeted to $126.01 per share: 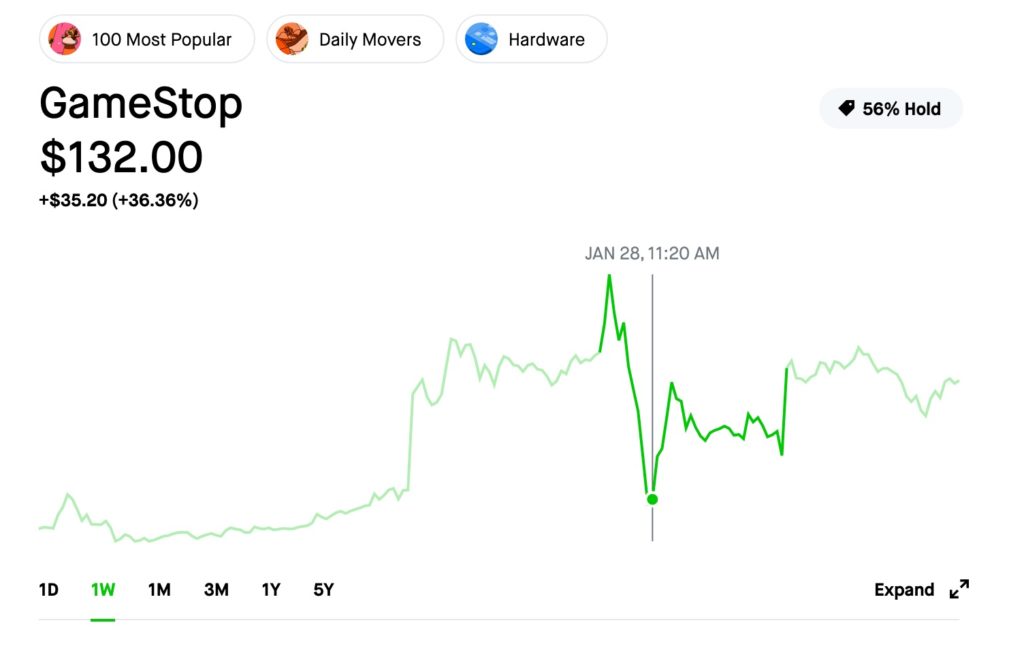 Moreover, the screenshot did not include the user’s average cost per share or market value; if they bought in at over $118.93, they would sustain a higher loss. That screenshot was commonly added to discourse around the non-consensual sale rumors:

Holy shit! @RobinhoodApp is FORCE SELLING people’s positions! WOW! This is an absolute circus! People are being forced to sell at a gain/loss which has tax consequences etc. This is a huge problem and a mind blowing mistake.

A separate, popular, and unverified screenshot showed another purported order to sell placed without a user’s consent, alongside an error message suggesting the user was unable to cancel the order to sell “to mitigate the risk to [their] account”:

.@RobinhoodApp's apparently selling people's shares "for their own good" 🙃

That screenshot was also shared in a popular tweet by columnist Max Burns (as was the message in the separate screenshot seen above):

Reaching out to @RobinhoodApp for confirmation that they appear to be selling retail investors' shares in $GME whether they want to sell or not.

If you're a part of WallstreetBets and you've experienced this, let me know in the comments. https://t.co/I6hAyxfhnU

In the next tweet with the longer Robinhood message screenshot, Burns wrote:

Wow, @RobinhoodApp does in fact seem to be closing out $GME positions on behalf of retail investors, arguing it’s for their own good.

Never seen folks *forced* to sell their stock to protect a hedge fund before. Absolutely wild.

Burns subsequently stated that he had spoken to Robinhood users whose $GME positions were closed by Robinhood without their consent. Burns added that he “reached out to several individuals whose accounts have had $GME force-sold,” and that “only about half of the folks I spoke to were trading on margin accounts–so the margin call argument (a justified reason for RH to force-sell) doesn’t hold up for every case”:

To clarify: I've reached out to several individuals whose accounts have had $GME force-sold, and only about half of the folks I spoke to were trading on margin accounts–so the margin call argument (a justified reason for RH to force-sell) doesn't hold up for every case.

For the margin calls that *did* happen today, they occurred because platforms systematically banned retail investors from purchasing $GME shares.

That amounts to Robinhood manufacturing a margin call to “protect” its traders in a way that also benefited its corporate ownership.

However, the only two screenshots we saw in that thread (and in most discussions about Robinhood force-selling $GME on behalf of users) were the ones seen repeatedly above. A third screenshot unrelated to the two in that and other threads was shared by @CopingMAGA on Twitter:

One of our followers sent their experience with Robinhood selling their shares WITHOUT permission.

Their $800 non-margin $NOK position got closed while they were asleep. They never requested this.#RobbinHood pic.twitter.com/WKe2GNYgcd

In the comments of that tweet, a user linked to purported terms of service relevant to the rumors:

Robinhood explicitly states in its terms of service, in Section 5A subsection 5, that it has no right to sell its users stock for them — which they did

That screenshot accurately described the linked material [PDF], on page 5 of a document called, “Robinhood Financial LLC & Robinhood Securities, LLC Customer Agreement.” Tech news organization The Verge got in contact with twelve individual Robinhood users reporting that their shares of $GME and $AMC had been forcibly sold out from under them:

No, Robinhood tells The Verge, it didn’t sell off full shares of GameStop, AMC, and other buzzy stocks without permission from its traders.

That contradicts the stories of twelve people who spoke with The Verge, saying that the app unexpectedly sold off their holdings in some of these companies. Quite a number of Robinhood users expressed their surprise on social media today that the app was selling off their stakes, and we tracked down a dozen of them.

Quoting a spokesperson as saying (confusingly) that “claims that Robinhood proactively sold customers’ shares outside of our standard margin-related sellouts or options assignment procedures are false,” The Verge added that the twelve people they had interviewed said that “they didn’t have options in GameStop or AMC and hadn’t purchased the stocks on margin.”

At least two unverified screenshots seemed to show that Robinhood users (possibly using funds borrowed via Robinhood’s margin function) may have had shares liquidated and sold by the brokerage app — in one case, possibly at a price lower than $GME traded on that day. The Verge independently identified and verified twelve of the affected people, all of whom said they owned stock outright (rather than options) and did not use margin to purchase the shares. Robinhood denied selling users’ shares without permission in a statement to The Verge.