In Nintendo's Duck Hunt, the second controller controls the duck.

On November 1 2021, a post claiming the Nintendo NES’s second controller can “control the duck” in Duck Hunt was shared to the Facebook group “I grew up in the 80’s & 90’s”: 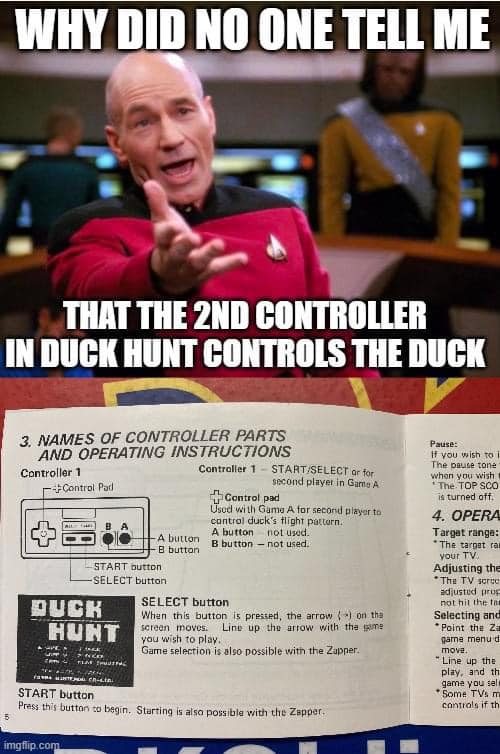 Did anyone know this? from gaming

Under that, a closely-cropped manual for what appeared to be a Nintendo NES Classic controller or Duck Hunt appeared. (Duck Hunt was operated with a “zapper” gun, not a standard NES controller.)

Titled “3. Names of Controller Parts and Operating Instructions,” it provided details for “Controller 1.” “Controller 2” included symbols for controller buttons, and it read in part:

Controller 1 — START/SELECT [or?] for second player in Game A

It seemed possible that the crisp-looking manual belonged to the newer Nintendo NES Classic console — but that device did not include Duck Hunt as one of its pre-installed games. Moreover, Reddit threads in 2018, 2014, and 2010 introduced versions of the claim, some prior to the console’s reintroduction:

"While Duck Hunt does not have a traditional multiplayer mode, the manual states that a second player may plug in a standard NES controller in the other controller port and control the duck that appears. This option is only possible in the one duck mode." …Arrrrrgh, how did I never know this?? from gaming

TIL In Duck Hunt, Player 2 Can Control the Ducks from todayilearned

Did you know the second controller controls the ducks in Duck Hunt?! from nintendo

Two of the three Reddit submissions cited Wikipedia, but the 2018 post coincided with a series of viral Seth Rogan tweets about the second controller controlling Duck Hunt‘s ducks:

Me and my sister found this out because I sat on the controller by accident and the duck kept flying to the top right corner.

Reddit posts in 2010 and 2014 linked to a Wikipedia entry for Duck Hunt, and a section that explained the context of the “second controller controlling the ducks”; the passage also indicated that Nintendo’s original “Zapper” only worked with cathode ray tube television sets:

Duck Hunt is a shooter game in which the objective is to shoot moving targets on the television screen in mid-flight. The game is played from a first-person perspective and requires the NES Zapper light gun, which the player aims and fires at the screen. It also requires a CRT television screen since the Zapper gun will not work with LCD or HDTV’s. Each round consists of a total of ten targets to shoot. Depending on the game mode the player selects prior to beginning play, one or two targets will appear on the screen at any given time, and the player has three attempts to hit them before they disappear.

Duck Hunt has three different game modes to choose from. In “Game A” and “Game B”, the targets are flying ducks in a woodland area, and in “Game C” the targets are clay pigeons that are launched away from the player’s perspective into the distance. In “Game A”, one duck will appear on the screen at a time while in “Game B” two ducks will appear at a time. “Game A” allows a second player to control the movement of the flying ducks by using a normal NES controller. The gameplay starts at Round 1 and may continue up to Round 99. If the player completes Round 99, they will advance to Round 0, which is a kill screen (in “Game A”) where the game behaves erratically, such as targets that move haphazardly or do not appear at all and eventually ends.

Via a 2017 thread to Reddit’s r/NES, we located a database of scanned, searchable NES manuals. A PDF version for Duck Hunt matched the meme’s second panel, with the “3” being page three of the title’s manual: 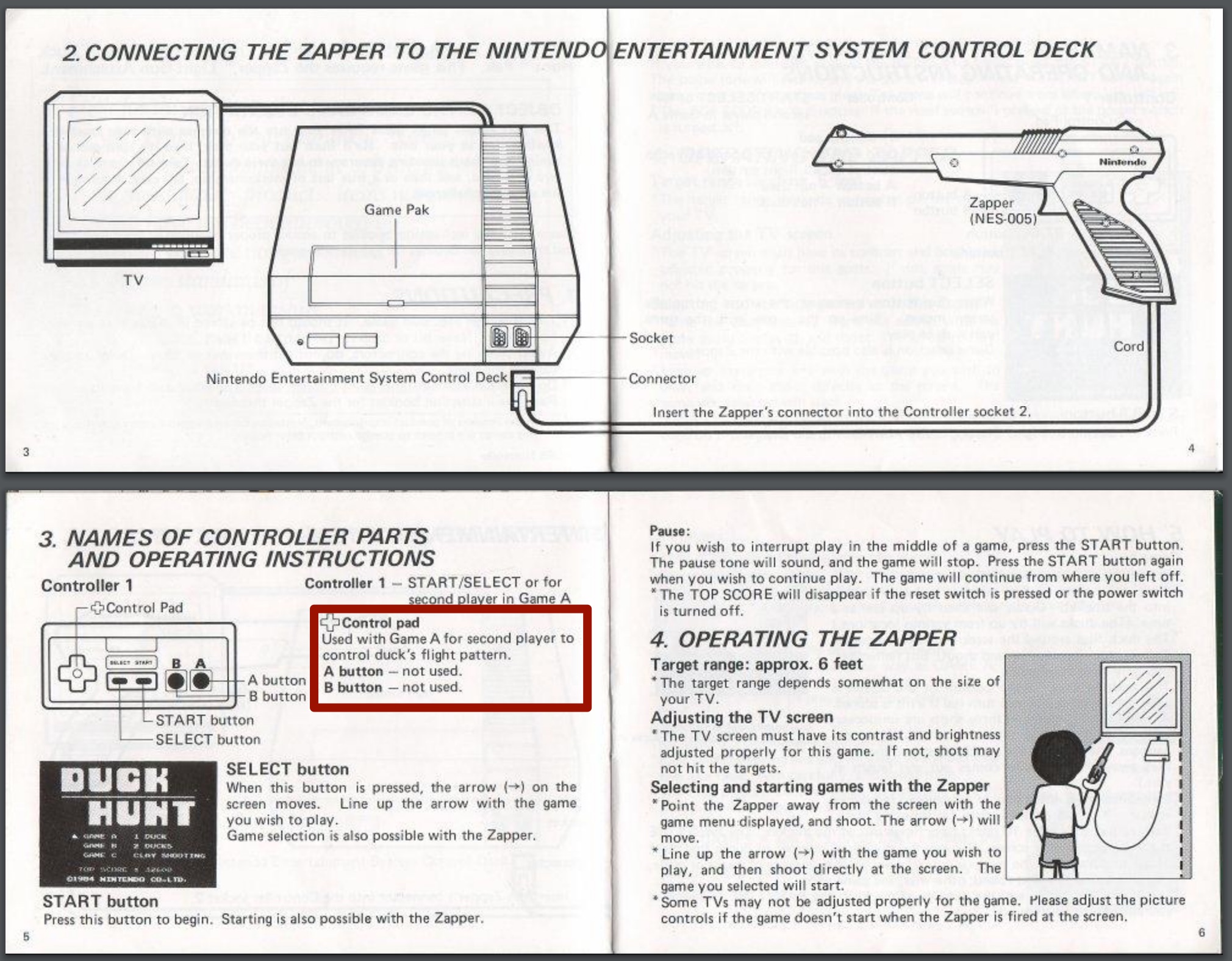 An October 2021 meme asserted that “the second controller in Duck Hunt controls the duck,” but it wasn’t the first time internet users discovered or rediscovered that lesser-known Duck Hunt gameplay function. A database of Nintendo NES game manuals featured the meme’s screenshot on page three of the manual for Duck Hunt, and a frequently-linked Wikipedia entry indicated that the “Zapper” only operated with old-fashioned cathode-ray televisions. However, the claim was accurate — in the original Duck Hunt, player two could utilize the standard controller’s control pad arrows to control the “duck’s flight pattern.”