Americans pay 25 percent of their pay for "employer provided" health insurance — which they prefer — whereas people in the UK pay £10 per check for NHS coverage.

On February 20 2019 the Facebook page “Medicare for All” shared a following meme contrasting the purported costs of health care coverage in the United States versus the United Kingdom (and alleging that Americans prefer their system): 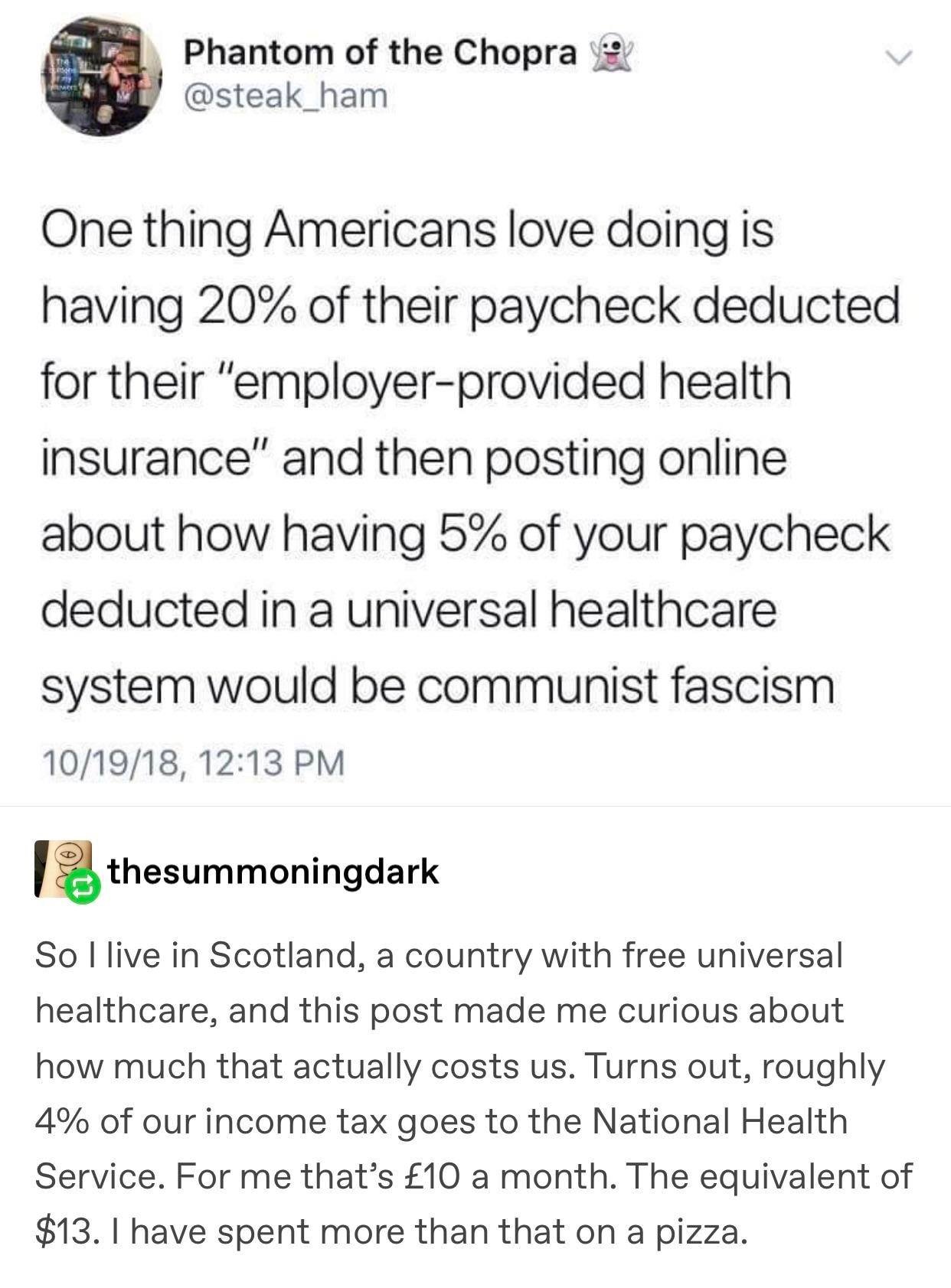 The meme showed a screenshot of a Tumblr user commenting on a screenshot of a tweet. The first user (@steak_ham/Phantom of the Chopra) commented on purported American preferences with respect to healthcare costs, and the second (@thesummoningdark) added input from the perspective of a resident of Scotland with National Health Service (NHS) coverage:

Phantom of the Chopra
@steak_ham

One thing Americans love doing is having 20% of their paycheck deducted for their “employer-provided health insurance” and then posting online about having 5% of your paycheck deducted in a universal healthcare system would be communist fascism
10/19/2018 12:13PM

So I live in Scotland, a country with free universal healthcare, and this post made me curious about how much that actually costs us. Turns out, roughly 4% of our income tax goes to the National Health Service. For me that’s £10 a month. The equivalent of $13. I have spent more than that on a pizza.

In addition to claims which we could check to a degree (health care costs for the individual taxpayer in the United States versus the United Kingdom), it includes characterizations about Americans’ feelings about their health care coverage situation. It is reasonably well demonstrated that opinions on the administration of healthcare are incredibly broad ranging in the United States.

Nevertheless, the claim that Americans “love having 20 percent of their paycheck deducted for their ’employer-provided health insurance'” is somewhat checkable. Several rounds of polling have shown 70 percent of Americans support the idea (85 percent of Democrats and 52 percent of Republicans in one poll, with 20 percent of respondents in opposition). The idea seems to typically poll at more than half of Americans registering support, although at least one analysis was skeptical of the repeating supportive poll numbers.

That said, the opening statement (that Americans “love” the costs of their health coverage) didn’t actually stand up to scrutiny — polls undertaken in recent years have repeatedly showed growing interest in a single-payer healthcare system for the United States, for example.

The question of who pays for “employer-provided health insurance” is a sticky one. “Employer responsibility” is a provision of the Affordable Care Act (known colloquially as “Obamacare“), but it involves flowcharts and a number of subclauses around the size of the company and shared costs. A September 2018 Forbes item described the split between employer and employee contribution on average (but with a lot of fluctuation):

Health Insurance (typically $5,000 – $30,000) – Your health insurance is the most significant component of your benefits. How can you value what your employer contributes for you and your family, as well as the discount you receive on coverage for participating in a large group plan? According to the 2018 Milliman Medical Index, the cost of healthcare for a typical American family of four covered by an average employer-sponsored preferred provider organization (PPO) plan is $28,166, with employers typically picking up 56% of the cost. That means that participation in their company sponsored health care plan is worth at least $15,788 for that family.

Of course your insurance costs may be different, and your employer may subsidize more or less of that. In my case, my employer pays 100 percent of my individual health insurance premium. My husband’s employer pays most of the coverage for him and our kids. Don’t dismiss the enormous financial value of company-subsidized health insurance just because it’s a common benefit in large companies. You’d have to earn nearly twice as much as the premium costs to pay for that insurance on your own after taxes.

Annual premiums for employer-sponsored family health coverage reached $19,616 this year, up 5% from last year, with workers on average paying $5,547 toward the cost of their coverage. The average deductible among covered workers in a plan with a general annual deductible is $1,573 for single coverage. Fifty-six percent of small ﬁrms and 98% of large ﬁrms oﬀer health beneﬁts to at least some of their workers, with an overall oﬀer rate of 57%.

Obamacare held that that cost not exceed roughly 9.5 percent of annual household income. However, KFF also found that many employers creatively foist the financial burden of healthcare off on employees:

The real problem is that health care is very expensive, Levitt said. But most Americans don’t realize the true cost because they are shielded by their employers.

Some 150 million people have insurance through work, paying only about $440 a month for a family plan, while employers cover the rest, or about $1,075.

For the 10.5 million enrollees on the Obamacare exchanges, health insurance costs are more transparent. And more of the burden falls on the consumers. That is leaving an untold number of Americans opting to remain uninsured, rather than shell out thousands a year for premiums and deductibles. In 2015, 46% of uninsured adults said that they tried to get coverage but did not because it was too expensive, a Kaiser study found.

Overall, the cost of healthcare to the individual taxpayer is highly variable. But it is fair to say that the costs regularly ate into paychecks, and just the $440 cited in the excerpt above was a lot more than the £10 or $13 referenced by the Scottish poster in the meme. Which led to the second question: Are UK residents really paying only £10 a month (around USD$13 as of February 2019) for NHS coverage?

The poster described it as “free universal healthcare,” a rhetorical point of dispute in the single-payer debate. What advocates of the system’s adoption in the United States mean by that is “free at the point of use/service/delivery”:

The first thing that Americans should know about the National Health Service is that it’s free at the point of use to anyone who needs it. You don’t have to fill out much paperwork, and you get no bills, whether you go to see your family doctor, or go to hospital. No one in the UK goes bankrupt through medical costs, no one needs to delay medical treatment until they can afford it, and virtually no one is uninsured.

The costs of healthcare coverage in the United States typically is reported in annual terms. A February 2018 BBC fact check on then-recent claims made by President Donald Trump about the NHS reported:

If you look at all healthcare spending, including treatment funded privately by individuals, the US spent 17.2% of its GDP on healthcare in 2016, compared with 9.7% in the UK.

In June 2018, an Organization for Economic Cooperation and Development (OECD) comparison found that Americans spent $10,209 per capita on healthcare versus $4,264 in the UK.

In the viral Facebook above, the first reader said Americans “love” essentially paying more for their healthcare than UK residents. The second user claimed that their per-paycheck cost was £10 — fairly meaningless without knowing how much they earned or what their other costs might be.

Nevertheless, polls repeatedly demonstrate that a full 70 percent of Americans support the introduction of a single-payer system, nullifying the contention that Americans prefer their current system. The precise claims about £10 costs per paycheck were difficult to verify, but recent OECD comparisons proved that Americans shelled out $10,209 versus $4,264 in the UK per capita, making the meme a mixed bag — yes, Americans spend much more on health coverage than people in the UK and no, they aren’t happy about it.