On May 4 2022, an Imgur user shared a post titled “Domestic Supply of Infants,” which contained a screengrab of a footnote to a recently leaked Supreme Court draft decision to overturn Roe v. Wade: 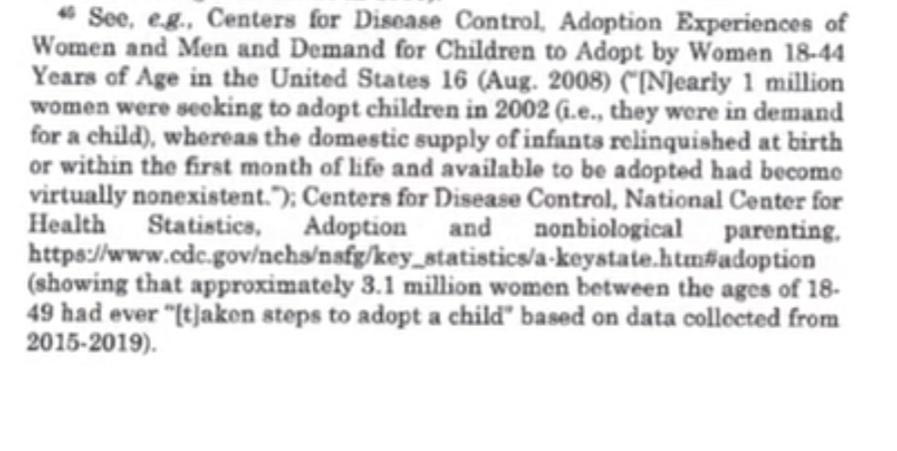 The blurry image of the footnote [46] read:

See, e.g., Centers for Disease Control, Adoption Experiences of Women and Men and Demand for Children to Adopt by Women 18-44 Years of Age in the United States 16 (Aug. 2008) (“[N]early 1 million women were seeking to adopt children in 2002 (i.e., they were in demand for a child), whereas the domestic supply of infants relinquished at birth or within the first month of life and available to be adopted had become virtually nonexistent.”); Centers for Disease Control, National Center for Health Statistics, Adoption and nonbiological parenting, [link] (showing that approximately 3.1 million women between the ages of 18- 49 had ever “[t]aken steps to adopt a child” based on data collected from 2015-2019).

On Twitter, a handful of tweets referenced the phrase “domestic supply of infants.” Some included screenshots:

Probably the most chilling thing about all this is ACB saying the quiet part out loud: that we don’t “need” abortion any more because the supply of adoptable domestic infants cannot meet demand. We’re baby making factories for fascist child trafficking basically

From the draft decision.

Read the line the says ‘the domestic SUPPLY of infants’ and ask yourself what other sick, nefarious intents may be driving all this

To take a play from the conspiracists handbook – does it matter that Roberts, Thomas and Barrett have adopted children? pic.twitter.com/UMklsK1zff

"the domestic supply of infants" right in the draft.

It was NEVER about rescuing orphans in desperate need of safe homes. It has always been about forcibly creating them to meet demand for infants. #RoeVWade #abortion #adoption #adopteetwitter #BabyScoopEra pic.twitter.com/NDRJ7zQ2zd

A Google search for “domestic supply of infants” (in quotes) revealed that it had only appeared about 14 times in published material. One of the links was a May 3 2022 Salon.com piece, grimly headlined, “Adoption means abortion just isn’t necessary, SCOTUS claims: That’s even worse than it sounds.”

About halfway through the 98-page opinion, which was authored by conservative Justice Samuel Alito — and which Chief Justice John Roberts acknowledged on [May 3 2022] as genuine — came a familiar argument: that “modern developments,” including the availability of “safe-haven” laws, which allow parents to anonymously relinquish babies without legal repercussions, have rendered abortion unnecessary. The opinion noted that “a woman who puts her newborn up for adoption today has little reason to fear that the baby will not find a suitable home.”

Tucked into a footnote for that statement was a telling citation from a 2008 CDC report that found “nearly 1 million women were seeking to adopt children in 2002 (i.e., they were in demand for a child), whereas the domestic supply of infants relinquished at birth or within the first month of life and available to be adopted had become virtually nonexistent.”

Salon.com’s reporting noted that the passage ” strongly resembled the argument Justice Amy Coney Barrett made last December [2021]” with respect to a decision on an abortion ban in Mississippi, expounding:

… Barrett, who is herself an adoptive mother, suggested that the existence of safe-haven laws and adoption in general rendered moot the pro-choice argument that abortion access protects women from “forced motherhood.” Rather, she continued, “the choice, more focused, would be between, say, the ability to get an abortion at 23 weeks, or the state requiring the woman to go 15, 16 weeks more and then terminate parental rights at the conclusion.”

Critics quickly pointed out that safe-haven laws are so rarely used that in many states the number of infants relinquished through them each year can be counted in single digits.

We were unable to find a complete transcription of the leaked Supreme Court draft overturning Roe v. Wade as of May 4 2022. However, several scanned versions were uploaded to sites like Scribd and DocumentCloud.

Footnote number 46 appeared on page 34 of the draft. That page referenced “safe haven” laws, which enabled individuals to safely surrender custody of a newborn in a designated location: 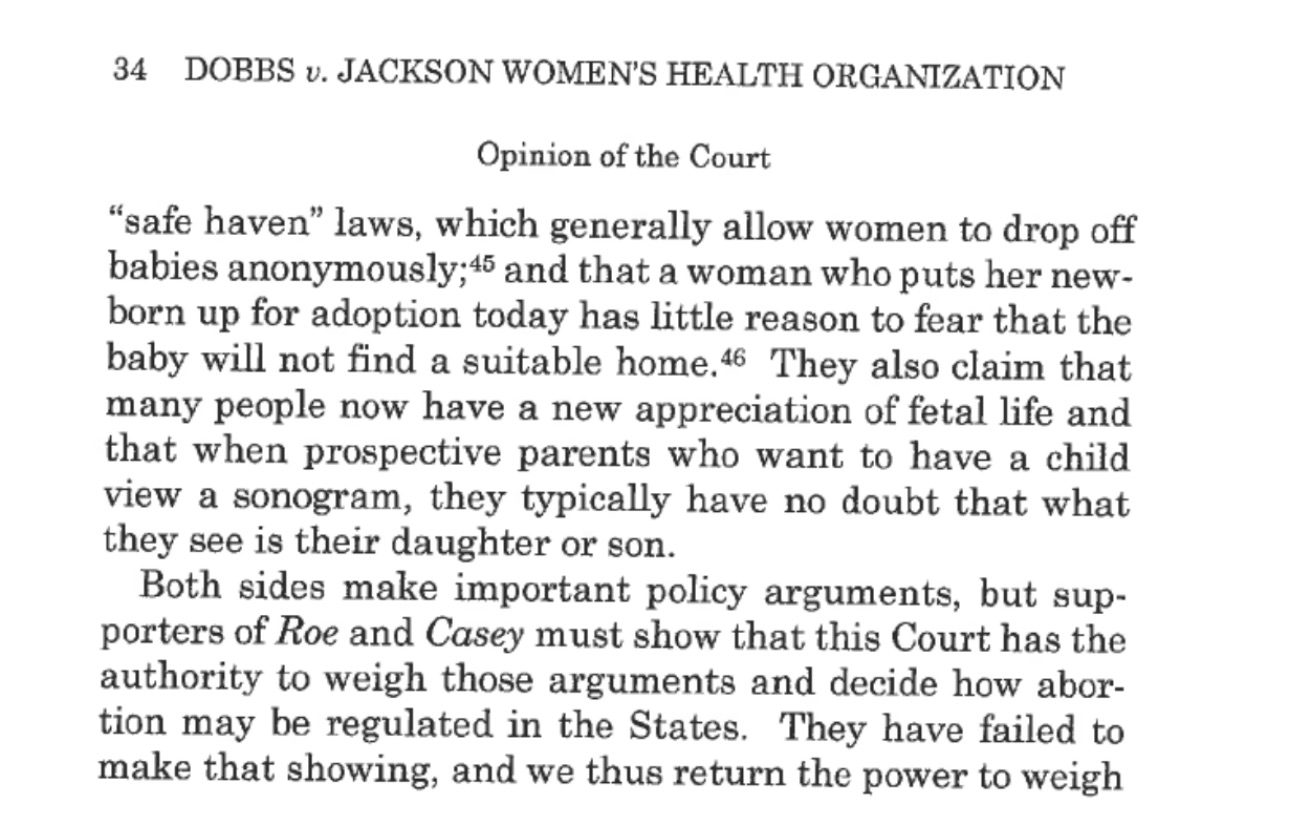 Under that excerpt, footnote 46 appeared. It was identical to the circulating screenshot:

A May 4 2022 Imgur post about the May 2 2022 leak of a Supreme Court draft decision overturning Roe v. Wade asserted that a footnote added by Justice Samuel Alito described a waning “domestic supply of infants” as a relevant factor in restricting access to abortion in the United States. The footnote was authentic and accurately described, and appeared on page 34 of the widely available draft decision.