Regarding a May 2 2022 Supreme Court leak indicating Roe v. Wade would likely to be overturned, Congress has the ability to codify abortion rights into law.

A May 2 2022 tweet by Sen. Bernie Sanders — asserting that Congress “must act” to codify Roe v. Wade — was widely popular on Twitter and shared at least three times to Imgur the following day: 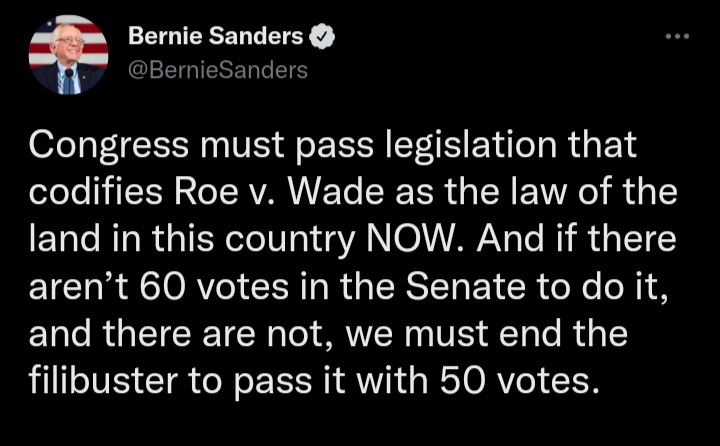 Sanders tweeted the same text twice on May 2 2022, once from @BernieSanders, and once from @SenSanders:

Congress must pass legislation that codifies Roe v. Wade as the law of the land in this country NOW. And if there aren’t 60 votes in the Senate to do it, and there are not, we must end the filibuster to pass it with 50 votes.

Both times, he said:

Congress must pass legislation that codifies Roe v. Wade as the law of the land in this country NOW. And if there aren’t 60 votes in the Senate to do it, and there are not, we must end the filibuster to pass it with 50 votes.

The Supreme Court on Tuesday [May 2 2022] confirmed the authenticity of a leaked draft ruling overturning the Roe v. Wade decision establishing a constitutional right to abortion but stressed that it was not final even as the disclosure triggered a political earthquake with potentially broad electoral and legal consequences.

Sanders was not the only politician to call for Congressional action to prevent the Supreme Court from overturning Roe vs. Wade in May 2022. USA Today quoted U.S. President Joe Biden as saying:

“Every other decision based on the notion of privacy is thrown into question,” Biden told reporters before flying to Alabama to tour a defense production facility. He said Roe v. Wade decided that the moment of conception is an open question, adding that any decision that makes a judgment on that question “goes way overboard.”

Earlier Biden released a statement calling on Congress to codify abortion rights and urged voters to elect lawmakers who would support those rights. He declined to say whether he would support changing Senate rules so legislation codifying the right to abortion could not be blocked by a filibuster.

In a May 3 2022 statement published to the White House’s website, Biden said:

… shortly after the enactment of Texas law SB 8 and other laws restricting women’s reproductive rights, I directed my Gender Policy Council and White House Counsel’s Office to prepare options for an Administration response to the continued attack on abortion and reproductive rights, under a variety of possible outcomes in the cases pending before the Supreme Court. We will be ready when any ruling is issued.

Third, if the Court does overturn Roe, it will fall on our nation’s elected officials at all levels of government to protect a woman’s right to choose. And it will fall on voters to elect pro-choice officials this November [2022]. At the federal level, we will need more pro-choice Senators and a pro-choice majority in the House to adopt legislation that codifies Roe, which I will work to pass and sign into law.

Several follow-up pieces about the major story addressed the likelihood that Congress could codify abortion rights into law in response to the leaked draft. Few addressed the underlying question of whether the tactic was possible.

A Washington Post story noted that it has been an uphill battle:

But even though Democrats have quickly unified behind the idea to codifying Roe in light of the draft opinion, the efforts at codifying the Supreme Court decision from nearly 50 years ago have fallen short to this point.

The Senate blocked a bill supported by Democrats in February that would have codified Roe into federal law. After the Women’s Health Protection Act was passed in the House, it was defeated in the Senate 46-48, failing to hit the 60 votes needed to overcome a filibuster. It also fell short of the 50 votes needed for passage due to Sen. Joe Manchin III (D-W.Va.) joining Republicans in opposition and the absences of several other Democrats.

On May 3 2022, fact checking site Verify (verifythis.com) published a fact check about the question of whether Congress could codify abortion rights. The site consulted legal experts and proposed legislation (H.R.3755 – Women’s Health Protection Act of 2021), reporting:

Should the Supreme Court rule to overturn Roe v. Wade, Congress could introduce and pass legislation that would federally protect abortion services. That would effectively supersede the potential decision, George Washington University Professor Casey Burgat told VERIFY in an email.

“However, and this is a big however, SCOTUS could then deem the new abortion law unconstitutional in a future case,” Burgat wrote. “A federal law is the best, most legitimate means of codifying the principles of Roe v Wade. It’s not bullet-proof because a future Supreme Court case can render the new law unconstitutional, but it’s by far the most feasible strategy to make abortion legal in all U.S. states.”

Complete text of H.R. 3755, the Women’s Health Protection Act of 2021, is linked above; it did not mention the Roe v. Wade decision, and it acted as standalone legislation codifying abortion rights. It passed in the House in September 2021, and then it stalled in the Senate in February 2022.

A “summary” tab described its provisions:

This bill prohibits governmental restrictions on the provision of, and access to, abortion services.

Specifically, governments may not limit a provider’s ability to

Furthermore, governments may not require a provider to

The bill also prohibits other governmental measures that are similar to the bill’s specified restrictions or that otherwise single out and impede access to abortion services, unless a government demonstrates that the measure significantly advances the safety of abortion services or health of patients and cannot be achieved through less restrictive means.

The Department of Justice, individuals, or providers may bring a lawsuit to enforce this bill, and states are not immune from suits for violations.

The bill applies to restrictions imposed both prior and subsequent to the bill’s enactment.

A viral tweet from Sen. Bernie Sanders said that Congress “Congress must pass legislation” to codify abortion rights in response to the May 2 2022 leak of a draft decision by the Supreme Court overturning Roe v. Wade. Several articles published the following day speculated that Congress would face difficulty in obtaining the votes to successfully do so. However, George Washington University Professor Casey Burgat told verifythis.com that “Congress could introduce and pass legislation that would federally protect abortion services,” a move which “would effectively supersede the potential decision.”