sSomeone "stole a car" to evacuate to Vinnytsia, Ukraine and contacted the owner, who purposely left the keys in the ignition to enable others to flee.

On May 2 2022, an Imgur user shared a photograph of a vehicle and a strangely heartwarming story about an individual apologizing because they “stole” a car — only to learn that the owner had left the keys in the ignition to help others: 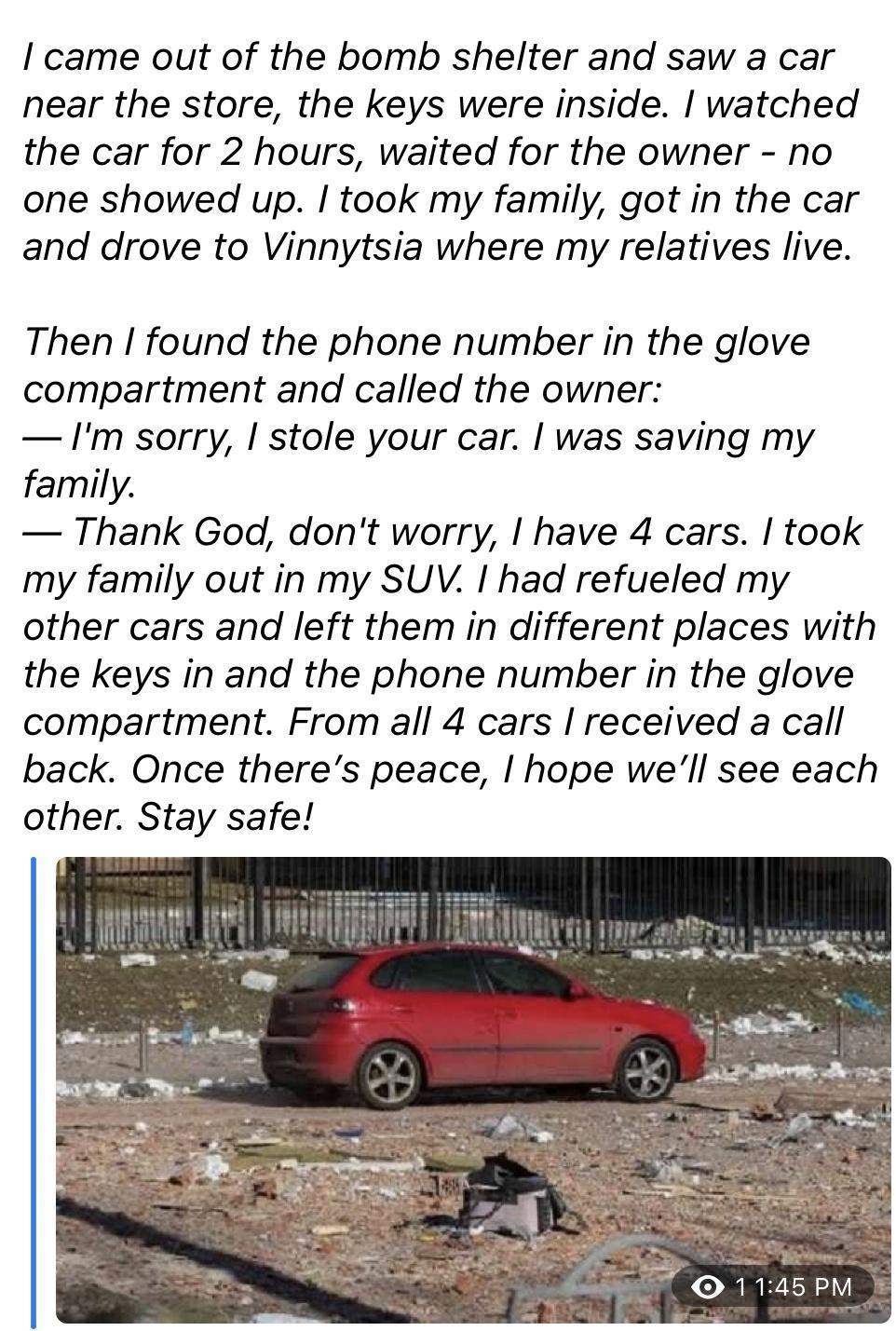 Text on the image told a concise but moving story:

I came out of the bomb shelter and saw a car near the store, the keys were inside. I watched the car for 2 hours, waited for the owner – no one showed up. I took my family, got in the car and drove to Vinnytsia where my relatives live.

Then I found the phone number in the glove compartment and called the owner:

– I’m sorry, I stole your car. I was saving my family.

– Thank God, don’t worry, I have 4 cars. I took my family out in my SUV. I had refueled my other cars and left them in different places with the keys in and the phone number in the glove compartment. From all 4 cars I received a call back. Once there’s peace, I hope we’ll see each other. Stay safe!

On Twitter, Ukraine’s ambassador to Austria shared screenshots of the story on May 2 2022:

A very similar story was shared on the same date by the Facebook page “Meanwhile in Ukraine.” Its text read:

“Sorry, I stole your car. Saved my family!” – an incredible story from a resident of Kyiv

“I left the bomb shelter and saw a car with keys in the ignition near the store. I watched it for two hours, waited for the owner – I didn’t wait. I took my family, got in the car and drove to Vinnitsa to visit relatives. I found a phone number in the glove compartment and called the owner:

– Sorry, I stole your car. Saved my family.

– Thank God, don’t worry, I have 4 cars. I took my family out in my jeep. The rest of the cars I filled with fuel and left in different places with the keys in the ignition and the number in the glove compartment. I received calls back from all cars. There will be peace – see you. Take care of yourself!”

There is kindness in the world! Ukrainians are heroes!

WORLD TOGETHER WITH UKRAINE 🇺🇦

Around the same time, the Facebook page Vgorode.ua (“in the city,” per Google Translate) shared a version of the story with slightly more detail. It included the first name of the person who supposedly stole the car and drove it to Vinnytsia (Kievan), and a journalist credited with publishing the account (Andrey Tsaplienko):

Kievan stole a car to take his family out, and admitted what he had done 🚗

Journalist Andrey Tsaplienko published a story that proves the unity and mutual help of Ukrainians in difficult times.

Kievan Alexey Saenko once came out of a bomb shelter and saw a car with keys near the store. The man watched her for two hours, waited for the master, but did not wait. He took the family, sat in this car and went to Vinnitsa.

Later in the suitcase Alexey found the owner’s phone number and called him. He said sorry I stole your car. Saved the family “. However, the owner of the car replied: “Thank God, don’t worry, I have 4 cars. Took the family out on one.

Leaving the rest of the cars in different places with the keys in the ignition and the number in the glove box.” The man, who didn’t name himself, did this on purpose so that people could leave to safety. According to him, he was called from all the cars.

A Reddit user shared it to r/ukraine on that date as well:

The story about a man who committed an unexpected act of kindness and left his car on the street so that someone else could evacuate went viral on Facebook. We would like to share it with you from ukraine

That iteration included a link labeled “Source,” which led to a Telegram post by the verified account “Ukraine NOW [English]” from May 2 2022. A description for that Telegram channel read:

The main verified source of official information about the current news in Ukraine.

The only other version we found was published to the website UkraineReporters.com. It appeared to be the source for the Imgur screenshot, and like all variations on the story, included a photograph of a red car.

The image included with the story (appended to the Telegram post linked above) was unrelated to the “Vinnytsia” evacuation story. It appeared in a February 26 2022 news report about destruction in Kyiv.

That photograph appeared to have been captured on that date by photographer Gorlushko Valdemar (labeled “Destruction near a residential building damaged by shelling.”) On March 5 2022 it was featured in an article, “All abandoned cars near the station building in Kharkiv will be evacuated” and captioned:

Photo: Kharkiv police warned about the evacuation of abandoned cars near the railway station (UNIAN)

On May 2 2022, several social media entities shared the “sorry I stole your car … [and] drove to Vinnytsia” story. An appended image was unrelated, captured on February 26 2022 in Kyiv. Nearly all versions of the story lacked details, but Vgorode.ua identified the individual who “stole” the car as Kievan Alexey Saenko, and the journalist who reported it as Andrey Tsaplienko. The account appeared to originate on the Telegram channel Ukraine NOW [English], but we were unable to validate its hopeful details. While the image was unrelated, it did not indicate the story was fabricated — merely difficult to corroborate.