Drive-thru convenience stores are only prevalent in Ohio.

A Facebook user’s popular post in November 2019 expressed surprise over the existence of drive-thru convenience stores, but their popularity and their existence itself date back decades.

The post (which has been spread more than 10,000 times on the platform) is a reprinting of a Twitter post featuring a photograph of one drive-thru and asking whether stores of that type were only located in Ohio. While the original photo has also been circulated through Twitter since first being posted a month earlier, the account responsible for it is no longer active: 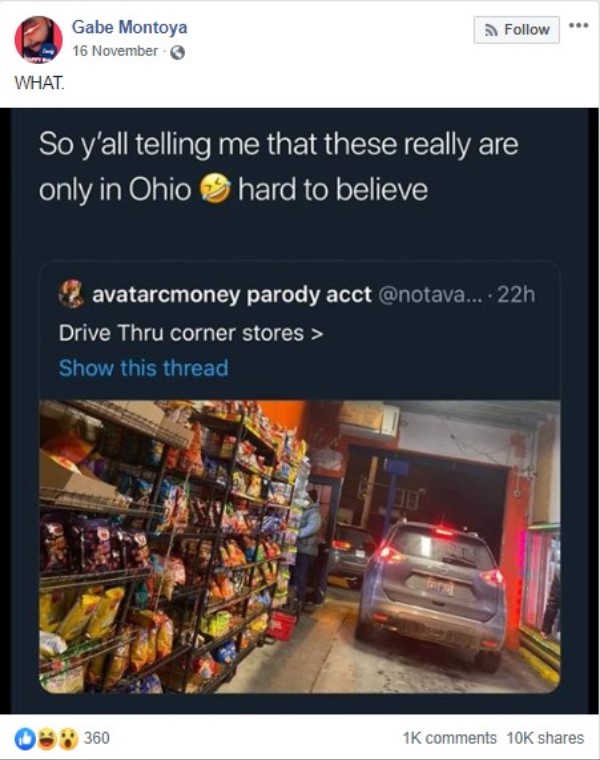 But the premise behind the post is false; there are drive-thru convenience stores in other states besides Ohio, including in Texas, North Carolina, and Florida — where the Farm Stores chain has operated since 1957. CNN reported in April 2019 that the chain planned to open another location in Louisiana made out of recycled storage containers.

As Gizmodo reported two months earlier, the idea of drive-thru shopping extends even further back than Farm Stores’ first market. Retailers in the 1920s explored the idea of those types of stores as an effort to capitalize on the jump during that time period in auto sales. An excerpt from a 1928 issue of Science and Invention magazine explained the potential appeal of the set-up:

The motorist who wants to dive into the market turns into the entrance at the right and then slows down to almost a crawl. He reaches out of the window of the sedan or out from the side of his touring car, or any other machine that he may have, and picks out those articles of foodstuffs which he requires. Most of them are, of course, wrapped up in convenient packages. The foodstuff is deposited in a tray moved along at the purchaser’s will, on a roller conveyor.

According to the trade publication CSP Daily News, which covers convenience stores (or “c-stores,” as they’re also called), a 2016 survey found that 14 percent of store operators at the time were considering adding a drive-thru section.