One extremely viral aspect of the conversation originated with a since-deleted June 26 2022 tweet, which featured a screenshot of an unverifiable anecdote via text message: 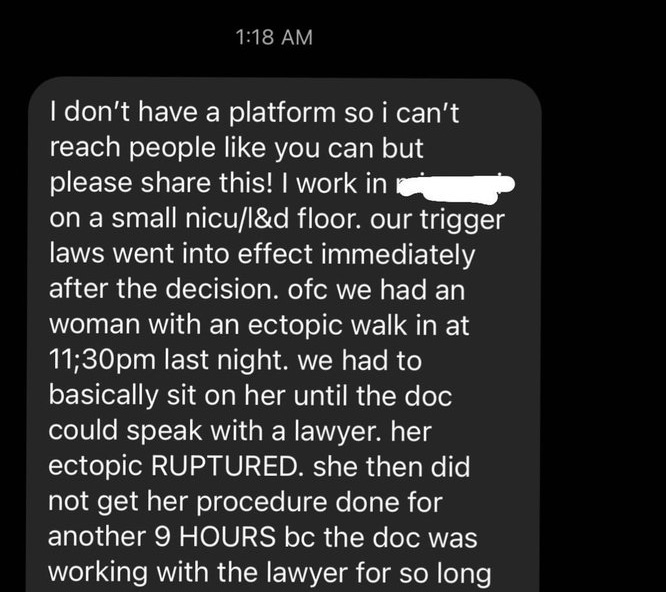 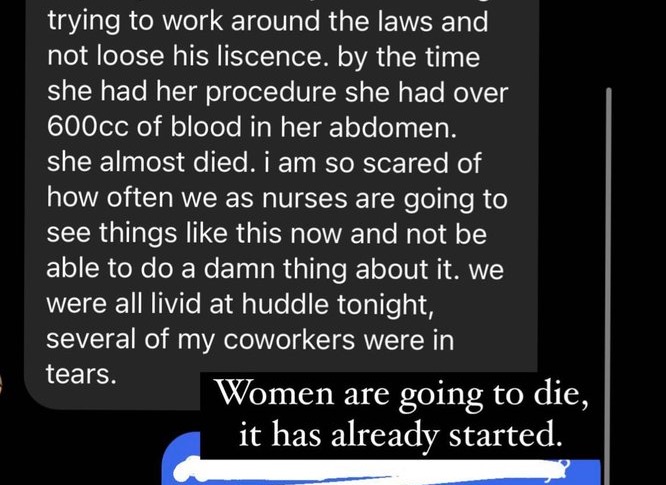 A timestamp (1:18 AM) was visible at the top of the screenshot, but it did not include a date. Its text suggested that the purported ectopic pregnancy rupture occurred after the June 24 2022 decision which overturned Roe v. Wade:

I don’t have a platform so i can’t reach people like you can but please share this! I work in [redacted facility] on a small floor. our trigger laws went into effect immediately after the decision. ofc we had an woman with an ectopic walk in at 11:30 last night. we had to basically sit on her until the doc could speak with a lawyer. her ectopic RUPTURED. she then did not get her procedure done for another 9 HOURS bc the doc was working with the lawyer for so long trying to work around the laws and not [lose] his [license]. by the time she had her procedure she had over 600cc of blood in her abdomen. she almost died. i am so scared of how often we as nurses are going to see things like this now and not be able to do a damn thing about it. we were all livid at huddle tonight, several of my coworkers were in tears. Women are going to die, it has already started.

An earlier, similar sentiment appeared in a tweet explaining that the treatment for ectopic pregnancy is abortion (with no alternative):

I’ve said it once, and I’ll say it a thousand times: The treatment for an ectopic pregnancy, a septic uterus, or a miscarriage that your body won’t release is abortion. If you can’t get those abortions, you die. You. Die.

Concurrently, high-profile anti–abortion accounts — all of which have a very long history of spreading harmful smears and dangerous anti-abortion disinformation narratives, conspiracy theories, and pseudoscience — began insisting that ectopic pregnancy treatment did not involve “abortion”:

The treatment for an ectopic pregnancy is NOT an abortion

The treatment for miscarriage is NOT an abortion

The treatment for septic uterus is NOT an abortion

There's a difference between losing a child & murdering a child

Not a single pro-life law impacts these treatments

The tsunami of pro-abortion disinformation has begun.

If you’ve had a natural miscarriage, you have not had an abortion.

There is a complete legal & moral difference between the tragic loss of a child & the intentional killing of a child.

Threads on anti-abortion subreddits amplified the claim that treatment for ectopic pregnancy was not considered “abortion.” However, at least one commenter shared an anecdote, suggesting that doctors in states with trigger laws might be anxious about interpreting the law in an emergency situation:

Some states have pretty ambiguous definitions around this and also leave interpretation up to physicians. Physicians aren’t lawyers and we all know when insurance gets involved it gets even more complicated.

My friend who’s a doctor in Kentucky is extremely concerned due to ambiguity and potential liability.

In a different anti-abortion subreddit, a post suggested that treatment for ectopic pregnancy was not “banned” as a result of Dobbs v. Jackson (the ruling overturning Roe v. Wade), which was predicated on the idea that ectopic pregnancy was morally different from abortion. Again, two commenters noted that doctors were put in a position of attempting to interpret new, extremely vague laws:

“It might be tough to tell the difference in the eyes of the law now, though. Imagine miscarrying and being accused of abortion and facing legal consequences. Awful.”

“If there is a fetal heartbeat detected in the fallopian tube, the treatment is an abortion.”

Commenters on r/NoStupidQuestions discussed the dueling claims about ectopic pregnancies in states with trigger laws. The thread’s submitter referenced the trigger law as written in Louisiana, which we addressed in a May 6 2022 fact check.

Notably, the law had no clear carve out for ectopic pregnancy. On top of that, as written, it defined personhood as occurring at fertilization:

… Louisiana’s “trigger law” defined pregnancy as occurring “from fertilization to full gestation,” and held that no “person may knowingly use or employ any instrument or procedure upon a pregnant woman with the specific intent of causing or abetting the termination of the life of an unborn human being.” Consequently, IUDs indeed reasonably fell under the definition of an “instrument” which could disrupt fertilization.

Discussions suggesting that ectopic pregnancy was not treated through “abortion” typically viewed the claim from a religious standpoint or one of personal opinion rather than looking at the science around it. Often, a screenshot from a page on Planned Parenthood’s website was used to bolster the assertion.

However, a June 27 2022 Houston Chronicle analysis, “A constitutional law professor explains the opinions overturning Roe v. Wade. Read her notes,” examined the entirety of Dobbs v. Jackson. In it, law professor Emily Berman addressed a portion of the dissenting opinion by Justices Breyer, Kagan, and Sotomayor.

The majority does not say — which is itself ominous — whether a State may prevent a woman from obtaining an abortion when she and her doctor have determined it is a needed medical treatment.

On page 22 of the dissenting opinion, all three dissenting justices acknowledge a lack of provision for medically emergent abortions (as in the case of an ectopic pregnancy):

Just as one example, an American woman is 14 times more likely to die by carrying a pregnancy to term than by having an abortion. See Whole Woman’s Health v. Hellerstedt, 579 U. S. 582, 618 (2016). That women happily undergo those burdens and hazards of their own accord does not lessen how far a State impinges on a woman’s body when it compels her to bring a pregnancy to term. And for some women, as Roe recognized, abortions are medically necessary to prevent harm. See 410 U. S., at 153. The ma- jority does not say—which is itself ominous—whether a State may prevent a woman from obtaining an abortion when she and her doctor have determined it is a needed medical treatment.

Notably, the word “ectopic” appeared nowhere in the entirety of the Dobbs v. Jackson decision. In other words, no portion of the Supreme Court’s ruling allowed for treatment of ectopic pregnancy, placing doctors in the position of possibly violating laws like the trigger law in the state of Louisiana (which also did not carve out an exception for ectopic pregnancy).

A screenshot of a text message purportedly sent by a nurse who witnessed a woman’s brush with death in a state with trigger laws went viral after the June 24 2022 decision overturning Roe v. Wade. That anecdote and other stories about the risks to women enduring ectopic pregnancy led to extensive disinformation about the details of Dobbs v. Jackson. Individuals falsely and dangerously claimed that ectopic pregnancy treatment was “not an abortion”; Dobbs didn’t mention ectopic pregnancy at all, but the dissenting opinion held that the “majority does not say — which is itself ominous — whether a State may prevent a woman from obtaining an abortion when she and her doctor have determined it is a needed medical treatment.”