"Over the last fifty years, the percentage of Americans who believe that abortion should be completely illegal has never risen above 25%."

On May 4 2022, a Reddit user shared a chart to r/dataisbeautiful amid ongoing, extremely fraught discourse about a leaked Supreme Court decision that aims to overturn Roe v. Wade:

It was titled “[OC] The Percent of Americans Who Believe Abortion Should Be Illegal (1975-2020),” and it included a simple and fairly static line graph. The graph’s horizontal axis — which purportedly plotted the percentage of Americans who believe that abortion ought to be “illegal” — hovered at (or lower) than 20 percent for the 45 year long period illustrated.

An “OC” at the beginning of the title referenced “original content,” indicating the chart’s submitter (u/thedatatracer) had created the chart themselves.

Only one in four Americans believe that abortion should be completely outlawed in the United States even though several states have enacted trigger laws that will completely outlaw abortion if Roe v Wade is in fact overturned.

If you are interested in other abortion-related visualizations check out my previous post here. You can also be updated when I make new posts on Reddit here.

“Gallup” was hyperlinked, and the link led to a page simply titled “Abortion.” Gallup’s “Abortion” page featured two line graphs at the top, plotting four specific answers to polls about the legality of abortion between 1975 and 2022:

While Gallup plotted all three in a comprehensive dataset, u/thedatatracer focused on the dotted line — “illegal in all circumstances.” The dotted line matched the rises and falls of the chart posted to Reddit, and, as in that chart, it largely hovered at or below 20 percent: 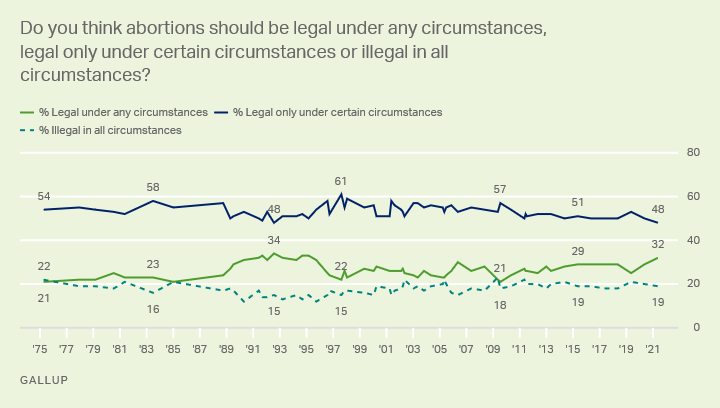 Its first entry was from April 1975, and its last entry was from May 2021. Throughout the years, the “illegal in all circumstances” figure peaked at an all-time high of 22, and a record low of 13 percent of all Americans. “No opinion” registered as low as one percent and as high as seven percent.

In the comments of the Reddit post, some users complained that the chart constituted “cherry picking” data, thus proffering alternative interpretations of Gallup’s data. However, the submitter labeled their chart “The Percent of Americans Who Believe Abortion Should Be Illegal (1975-2020),” and obtained their data from a credible and relatively non-politicized source, Gallup. That data also roughly matched that of Pew and other polls.

A popular Reddit post to r/dataisbeautiful purportedly charted the percent of Americans the last fifty years, claiming that “the percentage of Americans who believe that abortion should be completely illegal has never risen above 25 [percent].” Based on the underlying Gallup data, the claim was accurate. From April 1975 through May 2021, the percent of Americans who selected “illegal in all circumstances” peaked at 22 percent, and never reached or exceeded 25 percent; that figure dipped as low as 13 percent in 1993 and 1994.