You can determine the safety and freshness of an egg by placing it in water; "bad eggs" will float to the top, while very fresh eggs will sink.

A November 3 2021 post (“For testing fresh eggs”) spread virally from the Facebook group “Southern Cooking,” along with a straightforward graphic indicating that safe, fresh eggs sink in water, while “very old” and possibly bad eggs will float: 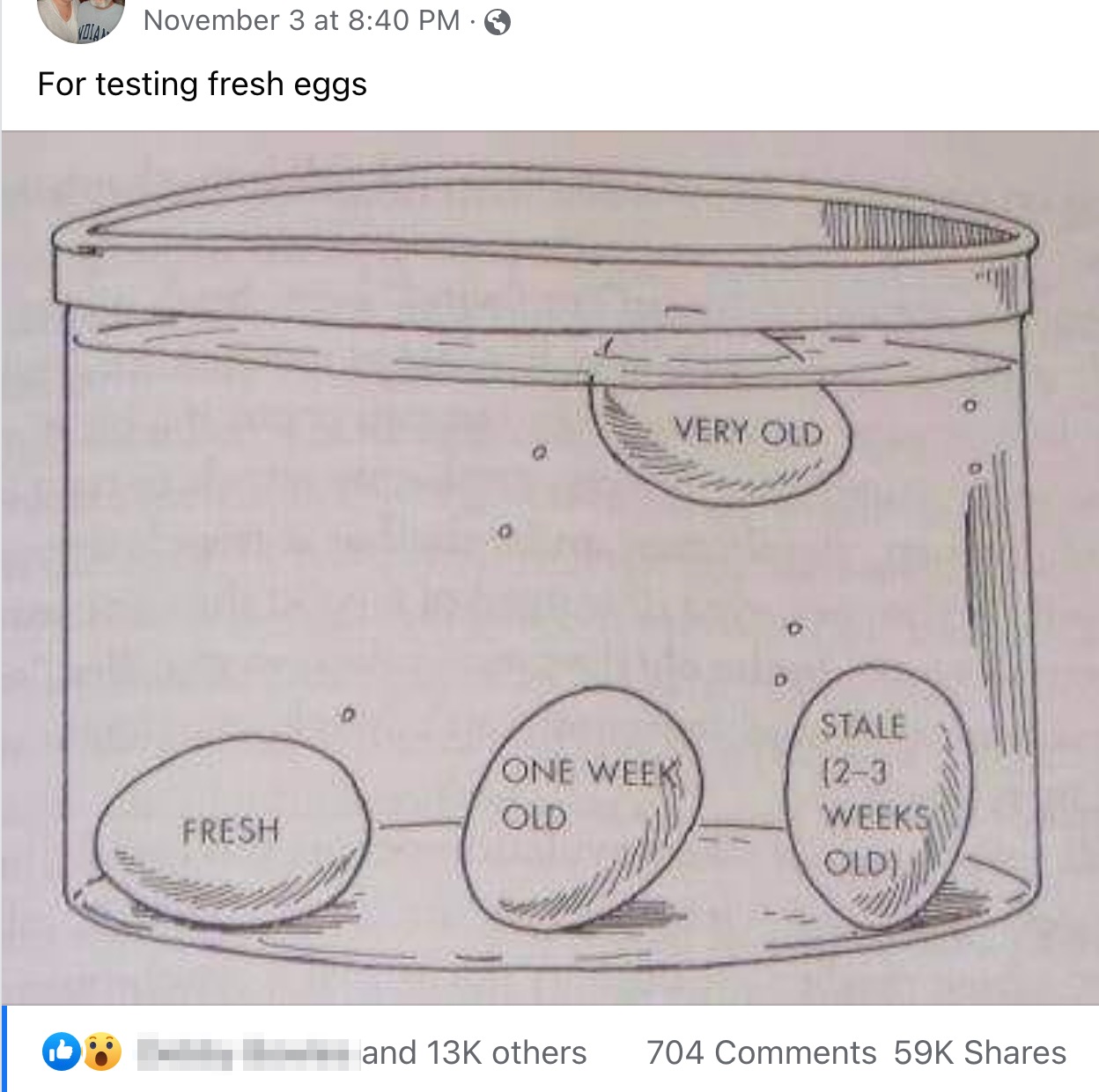 In addition to the short explanation, a graphic showed a drawing of four eggs in water. From the bottom left, the eggs were labeled “fresh” (completely still at the bottom), “one week old” (slight tilt upward), “stale [2-3 weeks old” (upright at the bottom), and “very old” (floating at the surface).

Hundreds of readers commented, most tagging Facebook friends to show them the graphic. But other commenters questioned the veracity of the image, asked whether the water should be warm or cold, and either disputed the claims or asserted that the opposite was true:

“not always true…I had Ameraucanas that laid ‘light eggs’ that were fine. I would use the water test (sometimes they floated) then the Break test…eggs were B-grade (yolks fine but whites were slightly runny) but fine for omelets (for me AND the girls).”

“I thought the fresh ones float”

“This is not a true test. Sorry but if you have chickens you know a freshly laid egg can be floating a bit too.”

“Well this is awkward. I store my eggs on the counter unwashed for months and rarely have any of them float or spoiled when I cracked them open in a dish before using. I’m pretty sure this applied to store bought eggs that are washed and already months old by the time you buy them.”

While the post was popular, it appeared with no sources. A 2019 Irish Times article (“The float test: Do you know how to tell if an egg is fresh?”) offered similar advice and also no citation, later referencing an anti-food waste campaign:

If an egg sinks to the bottom of a bowl of water and lies sideways, it is very fresh; if it stands on one end in bottom of the bowl, it is less fresh but still good to eat. But if it floats to the surface of the water, indicating that air has permeated the shell, it is no longer fresh.

This simple test can be more reliable than the best-before date stamp each egg laid in the EU must bear. But research in the UK has shown that consumers there are throwing away 720 million eggs every year – three times more than in 2008 and at a cost of £139 million (€161 million) …

…Too Good To Go is challenging the British public to use the water bowl test to check the freshness of their eggs to help cut down on edible food needlessly being binned. Meanwhile, research by Wrap has shown that 20 per cent of people don’t realise that it is possible to freeze eggs.

Typically, claims about the “egg float test” didn’t back the claim up with citations, but sometimes articles explained the reasoning — which sounded solid enough — behind the claim:

Why this method is accurate

An undated MedicalNewsToday.com item, “How to tell if eggs are still good,” referenced the “float test,” but stopped short of saying definitively whether it indicated that eggs were safe to eat:

The float test is a quick and easy way to check the freshness of an egg. The float test does not determine whether an egg has gone bad, but it does provide a useful indication of the age of an egg.

To perform the float test, place the egg in a large bowl of water. If the egg sinks or stays at the bottom, it is still fresh. An older egg will either stand on its end or float.

The float test works because air builds up inside the egg as it ages, and this increases its buoyancy.

However, an egg that floats may still be safe to eat. A person can further test the egg by cracking it open to smell it and check it for visible signs of contamination.

The Egg Safety Center’s blog addressed the “egg float test” in an October 2017 post, “Floating eggs: a bad egg, or just buoyant?” The group acknowledged that “it’s been said [floating] means the eggs have gone bad and should be thrown out,” but that “a floating egg does not necessarily equal a bad egg.”

Eggs have an air cell that becomes larger as the egg ages and acts as a buoyancy aid. An egg can float in water when its air cell has enlarged sufficiently to keep it buoyant. This means the egg is older, but it may be perfectly safe to use.

To determine if your egg is buoyant, but still usable, crack the egg into a bowl and examine it for an off-odor or unusual appearance before deciding to use or discard it. A spoiled egg will have an unpleasant odor when you break open the shell, either when raw or cooked.

This was echoed almost verbatim by the United States Department of Agriculture’s official page:

An egg can float in water when its air cell has enlarged sufficiently to keep it buoyant. This means the egg is old, but it may be perfectly safe to use. Crack the egg into a bowl and examine it for an off-odor or unusable appearance before deciding to use or discard it. A spoiled egg will have an unpleasant odor when you break open the shell, either when raw or cooked.

A viral Facebook post referenced the idea that an “egg float test” can be used to determine whether eggs are “very old” or “stale” or “fresh.” An industry group, the Egg Safety Center, addressed the long-circulating idea that bad eggs float, adding that some floating eggs can be “perfectly safe to use,” a claim that was backed up by information we found on medical sites and the official FDA and USDA.gov pages.

We would like to emphasize for safety reasons that if there is any doubt whatsoever about the freshness of the egg to err on the side of caution and discard it immediately.