A 2019 photo taken in Sydney, Australia shows train riders ignoring an elderly woman standing while they all had seats.

A story that first spread online without context in February 2019 did so once again in January 2021 — prompting the same disgusted reaction.

The photograph shows an elderly woman holding on to a safety pole inside a metro train in Sydney, Australia as a group of people in front of her sit, seemingly oblivious to her struggle: 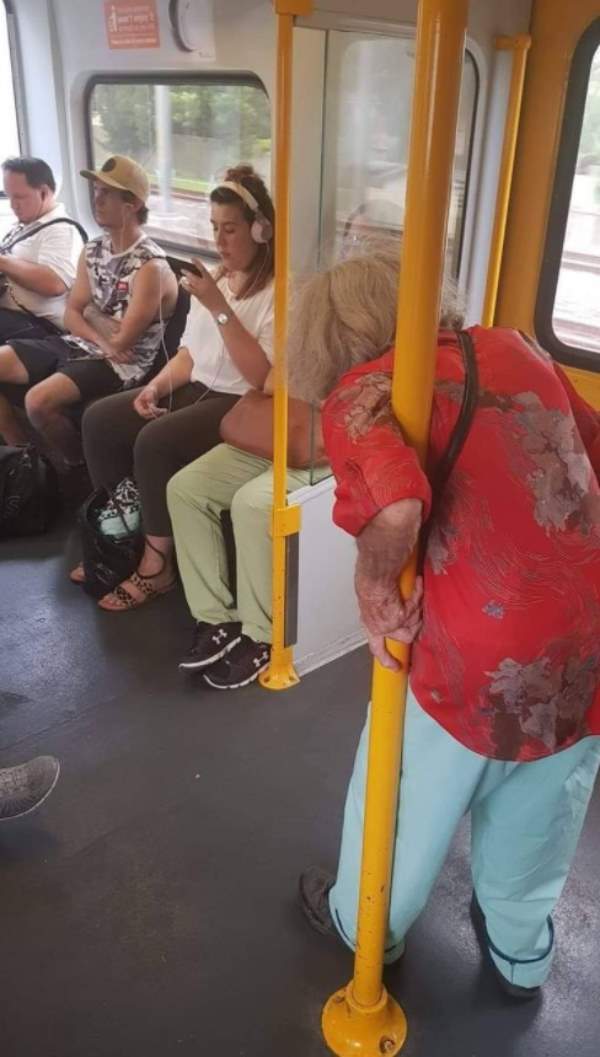 As News Corps Australia reported at the time, the photo began gaining traction after it was posted on the Facebook group “Aussie Aussie Aussie,” and it was quickly held up as a commentary on alleged modern-day insensitivity:

“Gone are the days where the younger generation look after for their elders,” one person said.

“This disgusts me, why aren’t people asking others to give their seat up,” another asked.

One added: “What pigs. Should be ashamed of themselves.”

There were some people who blamed the photographer for not doing something instead of standing back and taking photos.

“Why not man up and say something to them instead of taking a pic to get likes,” one person said.

The photograph has continued to spread across several other platforms like Reddit, and has also been featured on several blogs promoting posts testing readers’ “patience”:

In January 2021 the photo spread once more via a popular post on Facebook. However, that account did update their post to include the apparent ending to the story. Not long after the photo’s initial spread, Australian radio host Ben Fordham said on his show that he had received a statement from the woman’s grandson saying that the other passengers were not ignoring her.

According to Fordham, the grandson’s statement read, “The mature age lady was preparing to disembark at the next station — she’s my nanna.”

“A picture, while it might tell you a thousand words, sometimes it’s the wrong word,” Collins said of the uprorar fueled by the apparent misreadings online.

Collins did also add that the story did provide an opportunity to remind transit users to be mindful of their fellow riders. “Just do the courteous thing that all of us do — check before you sit,” he told Fordham. “There may be someone who needs it better than you. And if you’re sitting down, just look up.”