A repeal of the federal payroll tax would deplete funding for Social Security. 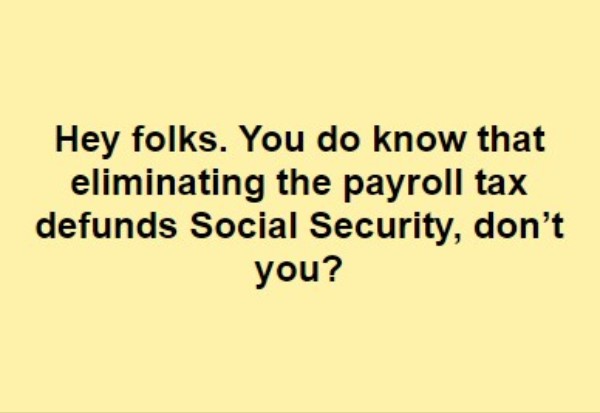 The post states, “Hey folks. ‘You Do Know that Eliminating the Payroll Tax Defunds Social Security, Don’t You?” a claim that has been verified by several analyses.

Trump first announced the tax delay in a presidential memorandum on August 8 2020, claiming that the move was necessary to benefit Americans financially amid the COVID-19 pandemic.

The tax deferral took effect on September 1 2020 and is slated to last until December 31 2020. The payroll tax itself normally provides funding for Social Security. According to the Social Security Administration (SSA):

Trump himself has made differing statements regarding his long-plans for the payroll tax. On August 12 2020, he said, “After I hopefully get elected, we’ll be terminating the payroll tax.”

One day later, though, he said:

Using the general fund to make up a payroll tax shortfall, though, would require federal legislation. An analysis by SSA chief actuary Stephen Goss provided at the request four Democratic Party lawmakers in August 2020 found that without a way to supplement deferred payroll taxes, reserves for the Disability Insurance Trust Fund (which covers benefit payments for eligible workers) “would become permanently depleted in about the middle of calendar year 2021, with no ability to pay DI benefits thereafter.” Goss wrote that the same would happen to the Social Security trust fund reserves “by the middle of calendar year 2023.”

However, Goss wrote that if a law were passed allowing for transfers from the General Fund to cover a payroll tax reduction, then “the projected depletion date of the trust fund reserves would be essentially unaffected by the legislation.” According to a 2020 trustee report, the disability trust fund is projected to be able to pay benefits in full until 2065.

“At that time, the fund’s reserves will become depleted and continuing tax income will be sufficient to pay 92 percent of scheduled benefits,” the agency’s report stated.

The agency also projected that the Social Security trust fund (or the Old-Age and Survivors Insurance Trust Fund, as it is more formally known) would be able to pay benefits in full until until 2034, after which tax income would be enough to pay 76 percent of regular benefits.

Goss noted in his analysis in December 2010, Congress approved a two-year reduction in the payroll tax covering 2011 and 2012; during that time workers’ contributions were cut from 6.2 percent of their earnings to 4.2 percent.

The 2020 tax deferral applies to workers who make less than $2,000 a week before taxes are deducted, but private employers are not required to follow the president’s directive. CNet reported, however, that the Internal Revenue Service had advised employers that if took part in the deferral in 2020, they would be required to recoup that tax revenue by placing additional deductions on workers’ paychecks between January 1 2021 and April 30 2021.

But Trump’s order has been called “unworkable” by the private sector; as the Washington Post reported, the U.S. Chamber of Commerce and around thirty trade groups in several industries said in a letter that many employers “will likely decline to implement deferral, choosing instead to continue to withhold and remit to the government the payroll taxes required by law.”