On May 12 2021, a screenshot of a tweet by former Labor Secretary Robert Reich appeared across platforms amid a larger discussion around employee treatment and pay by corporations. His tweet contained the claim that American taxpayers subsidized $153,000,000,000 of profits annually for large corporations, such as Walmart and McDonald’s: 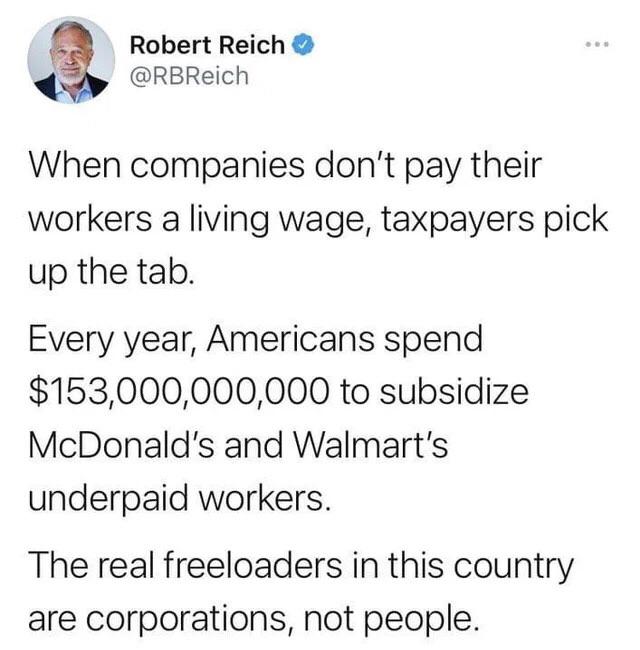 Reich did not use a term commonly and colloquially utilized to describe the practice of supplementing full-time wages with government assistance — “corporate welfare.” Corporate welfare has been the subject of at least five of our fact checks, but it is not uncommon for firm figures and reliable numbers to be attached to what is a nebulous network of subsidies disbursed to workers, and claims about it have been occasionally difficult to substantiate:

Although the Twitter screenshot was posted in May 2021, its date was cropped off — and we couldn’t initially find it among Reich’s  tweets. Reich did tweet the commentary, however, on December 18 2020:

When companies don’t pay their workers a living wage, taxpayers pick up the tab.

The real freeloaders in this country are corporations, not people.

Neither the Imgur post nor Reich’s December 2020 tweet included citations for the claim that McDonald’s and Walmart workers cost taxpayers $153 billion in subsidies every year. The ensuing discussion in the replies didn’t appear to involve a follow-up citation by Reich, but some commenters requested one:

I don't doubt this, but it'd be nice when a claim is made to back it up always with an article that shows how you arrived at this conclusion.

A different account responded to that tweet by way of a November 2020 CNBC article in the same general vicinity as Reich’s claim:

The November 2020 article (“Walmart and McDonald’s are among top employers of Medicaid and food stamp beneficiaries, report says”) addressed a study conducted by the Government Accountability Office (GAO), commissioned by Vermont senator Bernie Sanders (I).

CNBC’s summary of the GAO study findings began by suggesting validity to the claim that Walmart and McDonald’s workers were often forced to rely on federal assistance programs, but noted that the exact costs and scope were unknown:

Walmart and McDonald’s are among the top employers of beneficiaries of federal aid programs like Medicaid and food stamps, according to a study by the nonpartisan Government Accountability Office.

The question of how much taxpayers contribute to maintaining basic living standards for employees at some of the nation’s largest low-wage companies has long been a flashpoint in the debate over minimum wage laws and the ongoing effort to unionize these sectors.

Sen. Bernie Sanders, I-Vt., commissioned the study, which was released [in November 2020] by the congressional watchdog agency. The Washington Post was the first to report on the data. Sanders, who has run for the Democratic nomination for president, is a leading progressive lawmaker and a consistent critic of corporations.

Additional findings cited in the article included additional employers identified in the report — Amazon, Kroger, and Dollar General. It also noted that 70 percent of the 21 million beneficiaries analyzed for the study were employed full-time, yet they still qualified for federal assistance.

The GAO study was titled “Millions of Full-Time Workers Rely on Federal Health Care and Food Assistance Programs,” and it was published in October 2020. Highlights of the study were published here [PDF], and the full 91-page document was here [PDF].

The $153,000,000,000 figure did not appear in it, but it only analyzed eleven states. On November 18 2020, Sanders issued a statement about the completed study, which is titled “Taxpayers Subsidize Poverty Wages at Walmart, McDonald’s, Other Large Corporations, GAO Finds,” to sanders.senate.gov, and said:

At a time when huge corporations like Walmart and McDonald’s are making billions in profits and giving their CEOs tens of millions of dollars a year, they’re relying on corporate welfare from the federal government by paying their workers starvation wages. That is morally obscene. U.S. taxpayers should not be forced to subsidize some of the largest and most profitable corporations in America. It is time for the owners of Walmart, McDonald’s and other large corporations to get off of welfare and pay their workers a living wage.

No one in this country should live in poverty. No one should go hungry. No one should be unable to get the medical care they need. It is long past time to increase the federal minimum wage from a starvation wage of $7.25 an hour to $15, and guarantee health care to all Americans as a human right.

The specific figure of $153 billion appeared in a March 2017 article in the peer-reviewed law journal Minnesota Journal of Law & Inequality, “Food Stamps, Unjust Enrichment, and Minimum Wage,” as a footnote on page six of the piece:

Much of the debate about the minimum wage is about jobs. Some argue that increasing wages would harm workers and the economy by causing job loss; others argue to the contrary. An increase in the minimum wage, however, affects more than just jobs. It also affects the amount of taxpayer-funded food stamp benefits the government must pay to employees of low-wage employers. Many scholars have characterized payments from the government to employees of low-wage retailers, computed to be in the billions of dollars, as subsidies from taxpayers to those retailers. These subsidies help retailers keep labor costs low.

In its “Conclusion” section, the author posited:

The law of unjust enrichment provides that one who unjustly gains at another’s expense must disgorge the gain. This Article demonstrates that these elements are met in the case of low-wage retailers paying low wages, which should entitle the government to recover their unjust gain. The public argument about the propriety of raising the minimum wage should include not just the effect of the minimum wage on employment, but also focus on whether the government is in effect supplementing the minimum wage.

The Minnesota Journal of Law & Inequality cited an April 15 2015 Washington Post article [archived], published with the headline, “Americans are spending $153 billion a year to subsidize McDonald’s and Wal-Mart’s low wage workers.” It was authored by Chair of the UC Berkeley Center for Labor Research and Education Ken Jacobs, who also co-authored an April 2015 analysis of the effects of low wages on corporate subsidies, titled “The High Public Cost of Low Wages.”

UC Berkeley described the research and its findings in an April 2015 press release:

While the U.S. economy rebounds, persistent low wages are costing taxpayers approximately $153 billion every year in public support to working families, including $25 billion at the state level, according to a new report from the University of California, Berkeley, Center for Labor Research and Education. The report details for the first time the state-by-state cost to taxpayers of low wages in the United States.

Following decades of wage cuts and health benefits rollbacks, more than half of all state and federal spending on public assistance programs (56 percent) now goes to working families, the report documents.

“When companies pay too little for workers to provide for their families, workers rely on public assistance programs to meet their basic needs,” said Ken Jacobs, chair of the labor center and co-author of the new report. “This creates significant cost to the states.”

The analysis’ third paragraph broke down the $153 billion figure, averaged over the years examined by the UC Berkeley researchers:

This is the first report to examine the cost to the 50 states of public assistance programs for working families. We examine working families’ utilization of the health care programs Medicaid and Children’s Health Insurance Program (CHIP), as well as their enrollment in the basic household income assistance program Temporary Aid to Needy Families (TANF). Both of these programs operate with shared funding from the federal government and the states, and in this report we also examine the costs to the federal government of Medicaid/CHIP and TANF, as well as the Earned Income Tax Credit (EITC) and the food stamps program (Supplemental Nutrition Assistance Program, or SNAP). Our analysis includes only the cash assistance portion of TANF, and it does not include costs for state Earned Income Tax Credits, child care assistance, or other state-funded means-tested programs. Overall, we find that between 2009 and 2011 the federal government spent $127.8 billion per year on these four programs for working families and the states collectively spent $25 billion per year on Medicaid/CHIP and TANF for working families for a total of $152.8 billion per year. In all, more than half—56 percent—of combined state and federal spending on public assistance goes to working families.

In the “Conclusion” section of the analysis, Jacobs et. al. wrote:

When jobs don’t pay enough, workers turn to public assistance in order to meet their basic needs. These programs provide vital support to millions of working families whose employers pay less than a liveable wage. At both the state and federal levels, more than half of total spending on the public assistance programs analyzed in this report—Medicaid/CHIP, TANF, EITC, and food stamps—goes to working families.

Higher wages and increases in employer-provided health insurance would result in significant Medicaid savings that states and the federal government could apply to other programs and priorities.14 In the case of TANF—a block grant that includes maintenance of effort (MOE) provisions that require specified state spending—higher wages would allow states to reduce the portion of the program going to cash assistance while increasing the funding for other services such as child care, job training, and transportation assistance. Higher wages would also significantly reduce federal expenditures on the EITC and SNAP.15 Overall, higher wages and employer provided health care would lower both state and federal public assistance costs, and allow all levels of government to better target how their tax dollars are used.

In Jacobs’ Washington Post op-ed, he later cited other low-wage industries contributing to the problem and described the scope of what he described as the public cost of low wages. Finally, he called for formal action to address the issue:

The problem of low wages and the accompanying public cost extends far beyond the fast-food industry. Forty-eight percent of home care workers rely on public assistance. In child care, it’s 46 percent. Among part-time college faculty—some of the most highly educated workers in the country—it’s 25 percent … We found that, on average, 52 percent of state public assistance spending supports working families (defined as working for at least 26 weeks a year and 10 hours a week) – with costs as high as $3.7 billion in California, $3.3 billion in New York, and $2 billion in Texas.

When 73 percent of people who benefit from major public assistance programs live in a working family, our economy isn’t operating the way it should – and could – be. From 2003-2013, inflation-adjusted wages fell for the entire bottom 70 percent of the workforce … when Americans like [those interviewed in the piece] are working as hard as they can and are still paid too little to get by without public support, we need action to raise wages.

Reich’s December 2020 tweet, shared to Imgur in May 2021 as part of a larger discussion about workers’ rights, asserted that “Americans spend $153,000,000,000 to subsidize McDonald’s and Walmart’s underpaid workers” every year, a figure derived from an April 2015 UC Berkeley analysis (and often tacked to a companion piece by one of its authors published in the Washington Post that month). That figure was supported by Jacobs et. al.’s research, compiled across states and over several years to calculate an average cost.

Although the $153 billion figure had its roots in reality and was intended to be read as an average over years, there was additional context neither cited nor likely to fit in Reich’s tweet. That figure was calculated in 2015, and it could have been higher in 2020 (when Reich tweeted it) or 2021 (when Imgur revived it). Further, Jacobs’ titular mention of McDonald’s and Walmart in the title of his Washington Post article was incomplete — child care workers and home health care aides were also counted among workers whose wages were too low for them to survive without programs like Medicaid and SNAP. We rated the claim Decontextualized for those reasons, but the specific $153 billion figure and underlying claim were supported by ongoing, repeated, peer-reviewed research.