Facebook is offering money to politically conservative users to deactivate their accounts.

A Facebook page catering to right-wing users shared a post in September 2020 misconstruing a new study by the platform as being an incentive program for users in their political sphere.

The September 2020 post claims that Facebook “is offering cash for conservatives to deactivate their accounts before the election” above a screenshot of a survey the site sent to users.

Participants will have the option to take $10, $15, $20, or $25 per week in exchange for deactivating their accounts. 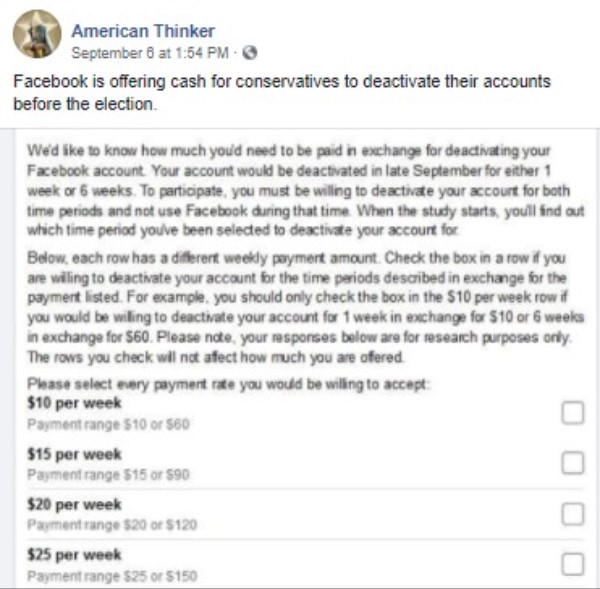 The study is legitimate (although Facebook does not state how each participant is selected and vetted), but it is not geared solely toward conservatives. Reporter Elizabeth Dwoskin from the Washington Post highlighted the survey on Twitter on September 3 2020:

So Facebook is now going to pay people to deactivate their IG and FB accounts before Election Day. It’s part of the research experiment announced Monday but WOW. This notice went out this week. pic.twitter.com/tV7DAw8F5I

She also posted a photograph of another part of the notice for prospective participants:

Regardless of the amount of time you deactivate, you will have the opportunity to take a survey immediately after the November 3 election and be paid for doing so. If you are assigned to keep your account deactivated through the election, we will ask you to complete this survey before you reactivate your account.

“Anyone who chooses to opt in – whether it’s completing surveys or deactivating FB or IG for a period of time – will be compensated,” Bourgeois wrote. “This is fairly standard for this type of academic research.”

Bourgeois also posted a link to a Facebook statement promoting the study as part of what it claims is “a new research partnership to better understand the impact of Facebook and Instagram on key political attitudes and behaviors during the U.S. 2020 elections.”

Representative, scientific samples of people in the U.S. will be selected and invited to participate in the study. Some potential participants will see a notice in Facebook or Instagram inviting them to take part in the study. Study samples will be designed to ensure that participants mirror the diversity of the US adult population, as well as users of Facebook and Instagram.

The study will be conducted by a group of seventeen researchers from various universities selected by Talia Stroud and Joshua A. Tucker, two committee chairs from Social Science One, a Harvard-based research group that partners with the platform.

Facebook claims that the study will be completed in December 2020, with the results published in “mid-2021 at the earliest.” The platform also claims that it will not have veto power over the publication of the study’s findings, but that it does have the option to remove “confidential or personally identifiable information.”