A Kenosha car dealership owner died by suicide after an insurance company refused to cover $2.5 million in damages sustained during unrest in August 2020.

On September 9 2020, a screenshot of a fabricated Fox Business article headlined “Kenosha car dealer kills himself after his insurance won’t cover a cent of the 2.5 million dollars of damages caused by the riots” was shared to meme aggregator iFunny.co, but with no indication that the image was misleading or false: 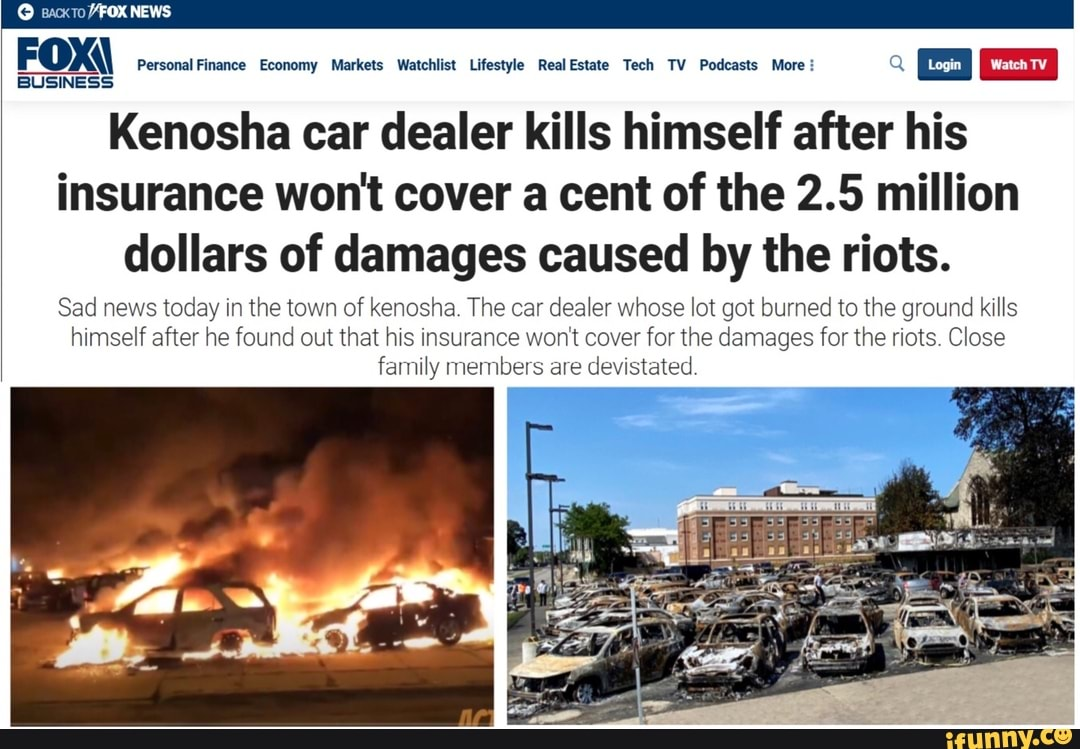 No source for the image was provided alongside the post. Text riddled with typographical errors read:

Kenosha car dealer kills himself after his insurance won’t cover a cent of the 2.5 million dollars of damages caused by the riots.

Sad news today in the town of kenosha. The car dealer whose lot got burned to the ground kills himself after he found out that his insurance won’t cover for the damages for the riots. Close family members are devistated.

On the Kenosha Car Dealership and its Owner

On August 24 2020, Kenosha News reported on the aftermath of unrest due to the police shooting of Jacob Blake, including damage to a local used car dealership:

In the aftermath of protests that turned destructive [on August 23 2020], broken glass and burned out vehicles littered downtown Kenosha.

Damage was widespread. A used car dealership on Sheridan Road south of 58th Street was destroyed by fire. The former Mangia restaurant, 5717 Sheridan Road, was also set on fire.

Burned out garbage trucks, which had been placed by the city to try to control movement of protesters, sat near the courthouse. Kenosha Fire Chief Charles Leipzig said three businesses were damaged or destroyed by fire, including a small fire in the Something Different store, 5716 6th Ave. He said at least three city garbage trucks were set on fire.

On September 2 2020, WKOW identified the owner of the dealership, adding that two nights of unrest led to an estimated $2.5 million in damage to the Kenosha car dealership:

With each step Anmol Khindri takes at what’s left of Car Source Pre-Owned Vehicles, he hears the crackle of broken glass. Surveying the lot, which contains the shells of more than two-dozen burned out cars, Khindri can only describe the sight as “heartbreaking.”

Khindri said his brother told him about the incident where Kenosha Police shot Jacob Blake seven times in the back on their way home from work the night of the shooting. Khindri said he saw cars heading into town, some of the drivers blowing through red lights, but did not think his or any other business was in danger.

On each of the next two nights, however, rioters set fire to cars in his lot. Khindri said the first night of mayhem caused $1.5 million in damages to the business; the second night finished off the rest of the cars, adding up to a total of $2.5 million in estimated damage costs.

Khindri told WKOW that civil unrest was not covered by his insurance, and that his insurer had “rejected the claim”:

Khindri said he was hopeful at first the dealership’s insurance provider would cover the damages. Instead, he said they entirely rejected the claim.

In a separate August 24 2020 report, WITI in Milwaukee cited damages of $1.5 million. A GoFundMe campaign for the Kenosha car dealership was created on August 27 2020, and its description read:

HELP NEEDED!!! We, at Car Source, are a victim of Riots, here, in Kenosha, WI and lost 137 cars and our facility this week. We are a family business employed over 20 families who worked on the daily basis. Car Source, a family business burnt down to ashes in a matter of hours due to riots in Kenosha, Wisconsin. Our insurance company is finding their way out so they don’t have to pay for all this arson that took place Monday early morning [August 24 2020] and 2nd time early Tuesday morning [August 25 2020]. Please help share this GofundMe page “Car Source in Kenosha” and help us try to get back onto our feet. GOD BLESS!!!!!!!!!!!

As of September 11 2020, the campaign raised $43,170 of its $500,000 goal. Khindri’s name re-entered the news cycle not long after news of the dealership damages were reported, when he refuted claims made on Fox News by the lawyer of accused shooter Kyle Rittenhouse:

A Kenosha car dealer said [on September 3 2020] he never asked a band of riflemen to guard one of his businesses the night of two fatal shootings, contesting a narrative the accused gunman’s attorney told on Fox News.

Kyle Rittenhouse, 17, is charged with killing two men and wounding a third late on Aug. 25 just a couple of blocks from the epicenter of protests at the Kenosha County Courthouse over the shooting two days earlier of Jacob Blake by a police officer …  His new attorney, John Pierce of Los Angeles  … repeated a storyline already popular in social media, that the group of rifle-toting men Rittenhouse was with that night had been asked by the owner of a damaged business to protect what he had left.

But the co-owner of Car Source said [on September 3 2020] he didn’t hire the men, ask for their help or endorse it.

“Why would I?” Anmol Khindri said, in an interview with the Milwaukee Journal Sentinel. “I’m already burned out. There was nothing left to protect.”

Khindri said when he left the area [on August 25 2020] around the time of the curfew — 9 p.m. that night — he did not authorize people to be on his roof or remember seeing gunmen there.

Fox News Articles About the Kenosha Car Dealership and Damages

On August 25 2020, Fox News published an article (“Kenosha rioters target car dealerships, other businesses in second night of unrest”) that reported in part:

A car dealership that was seen up in flames during the first night of Kenosha, Wis., protests-turned-riots was targeted again late [August 24 2020] into [August 25 2020] along with another dealership and other businesses, according to social media and reports … Car Source and a second dealership, Budget Motors, were subject to either looting or fires or both, according to multiple reporters on the ground.

On August 31 2020, Khindri was quoted in Fox News discussing the damage his dealership sustained:

“Everybody watched it burn to ashes,” Khindri told the paper.

“Nobody did nothing about it – nothing.” Prior to the destruction, Car Source had more than 140 vehicles available for sale, according to its website. Afterward, video showed the charred remains of dozens of cars — with only a few left unscathed.

Khindri called the trauma “horrific,” adding that he wants businesses to be protected from incidents that are out of their control. He said the insurance company has failed to provide immediate support and, as of last week, the destruction was labeled as “domestic terrorism,” according to Fox 6 Now.

“It’s easy for the government to say ‘alright, guys, you’re on your own. I’m sorry, your insurance doesn’t cover it. Oh, I’m sorry for your loss.’ No, that’s not an answer. This happened because they let it happen,” Khindri said.

Notably absent from the entire Fox News website was any reporting indicating that the Kenosha car dealer “killed himself” after insurance refused to cover damages sustained in the unrest.

An unconvincing but popular screenshot of a fabricated Fox Business article titled “Kenosha car dealer kills himself after his insurance won’t cover a cent of the 2.5 million dollars of damages caused by the riots” circulated on Facebook, Twitter, and meme aggregation sites; on first glance, the rife misspellings and poor grammar were indicative of the falsehood. It isn’t clear where the image originated or first spread, but the claim was obvious disinformation with the apparent intent of further inflaming tensions over the series of events in Kenosha leading up to and following unrest following the police shooting of Jacob Blake.