As content praising the suspect in a double homicide committed during a protest against police brutality in Kenosha, Wisconsin continued to proliferate on Facebook, the social media platform’s executive officer, Mark Zuckerberg, blamed a lack of training for the spread of content related to a local “militia” gang.

“There have been a bunch of media reports asking why [the] page and event weren’t removed sooner, especially when a bunch of people did report the page,” Zuckerberg said in remarks aired as part of an all-hands company meeting.

“The reason for this is, it was largely an operational mistake. But it’s because the team that enforces our policy against dangerous organizations is a specialized team. It is trained to look for symbolism and innuendo and different things that require a significant amount of training in how some of these cases to understand the details or nuances of how certain militias or how certain conspiracy networks or other dangerous organizations operate.”

Zuckerberg also claimed that the contractors assigned to review material related to the “Kenosha Guard” group “didn’t pick this up.” The video of Zuckerberg’s remarks was posted online after BuzzFeed reported that he faced criticism from Facebook staff for this failure:

All of Facebook’s more than 50,000 employees can watch and comment on the stream during the meeting, or view a recording after its conclusion — and as Zuckerberg spoke, angry comments poured in.

Some employees were also reportedly dissatisfied with Zuckerberg’s claim that “Guard”-related content was taken down following a second review done “more sensitively”; one worker reportedly commented that the company remained in a cycle of reacting to damage instead of “constructing mechanisms to nip these issues” before they escalated.

We contacted Facebook asking about the training of their group of “specialists,” and how it could not have included “the details or nuances” of groups like the one in Kenosha, which posted calls to arms prior to the fatal shootings and publicly asked local police not to tell them to leave the protests in Kenosha, which were incited by the extrajudicial shooting of Jacob Blake on August 23 2020.

Facebook did not respond. The site has also failed to say whether the “specialists” were involved in the decision earlier in the month to remove anti-fascist content as part of a larger purge of accounts “that support violent acts amidst protests.”

We also obtained content calling for violence from a similar group based near San Diego, California that continued to be active on the site, as well as at least one post glorifying the shooting suspect (“Kyle”): 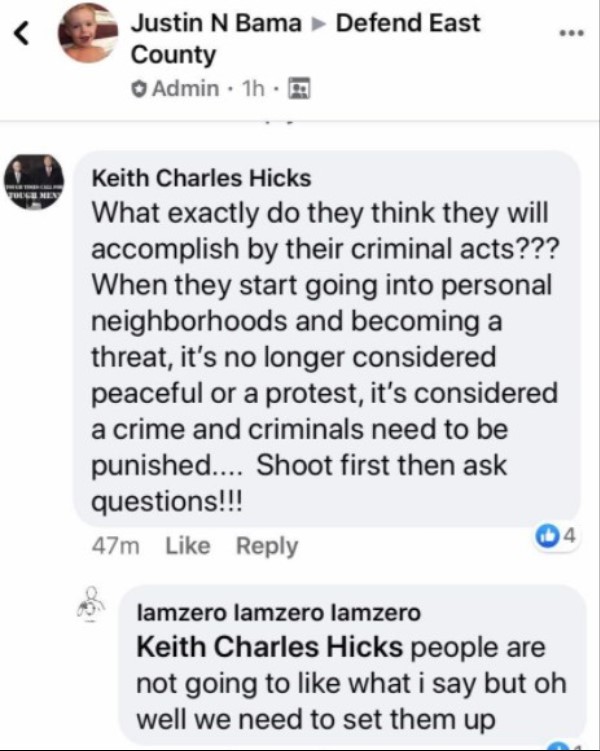 “For a lot of us the juxtaposition of seeing Jacob Blake facing away from the police and being shot next to these images of this white kid with a long gun strapped to his body walking by the police with nothing happening symbolizes what we all feel is wrong and unjust and just how much progress still needs to be made,” Zuckerberg said during the meeting.

Yet as The Guardian reported, content singing his praises continued spreading on Facebook even after the company designated the event a mass shooting. We also found similar content during our own search: 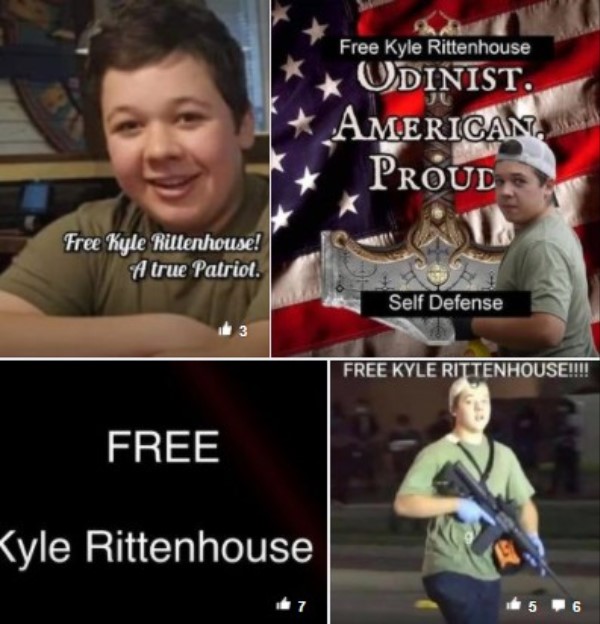 We asked Facebook if this content, as well as that of “Defend East County” and other, similar groups, violated its terms of service. The site has yet to respond.

The platform faced criticism again in May 2022, after it was used to spread the video of a mass shooting attack targeting Black residents in Buffalo, New York. Ten people were killed as a result of the attack by an 18-year-old white male. According to the New York Times:

Facebook posts that linked to the video posted on Streamable generated more than 43,000 interactions, according to CrowdTangle, a web analytics tool, and some posts were up for more than nine hours.

When users tried to flag the content as violating Facebook’s rules, which do not permit content that “glorifies violence,” they were told in some cases that the links did not run afoul of Facebook’s policies, according to screenshots viewed by The New York Times.

By comparison, Twitch — the video streaming platform on which the gunman originally aired his attack — took down both the footage and his accounts within two minutes of the original broadcast.

“In the end, we are all part of one internet, and we know by now that that content or behavior rarely — if ever — will stay contained on one platform,” Twitch vice-president of trust and safety Angela Hession said in a statement.