Rep. Ilhan Omar said on Twitter that she was "ashamed to be called an American" and said "the time for violence is now."

A short-lived Twitter account impersonating the right-wing Fox News network managed to draw attention to itself on January 5 2020 through the familiar tactic of a made-up smear against Democratic Party Rep. Ilhan Omar of Minnesota.

The account, “@FoxNewsChanUS,” received more than 2,000 retweets for a post claiming, falsely, that Omar tweeted “she’s ‘ashamed to be called an American’ and pleads other nations to ‘stop Trump’ with ‘violence’ Friday afternoon.”

The post, first identified by MediaMatters.com researcher Alex Kaplan, contained a ginned-up photograph made to look like as though it had emanated from Omar’s own account: 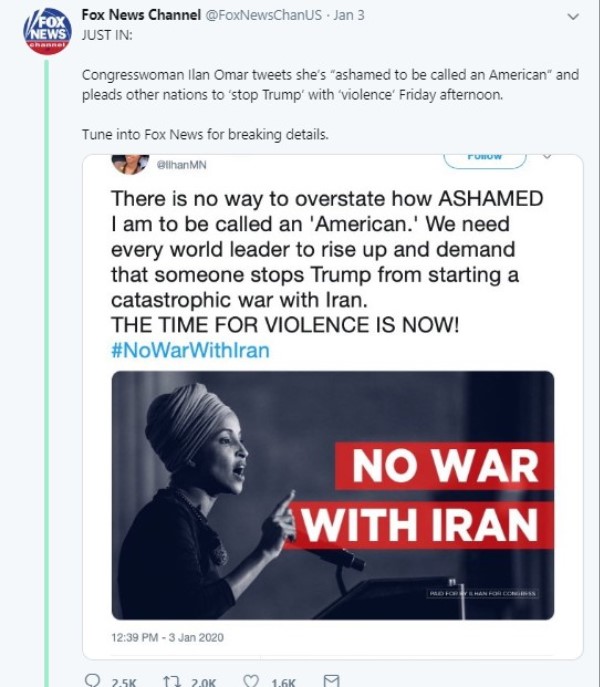 There is no way to overstate how dangerous this is.

We need every voice to rise up and demand that Congress stop Trump from starting a catastrophic war with Iran.

It is true that Omar has criticized Trump’s order to assassinate Iranian Gen. Qasem Soleimani on January 3, 2020. But she has never said that “the time for violence is now.”

The tweet smearing Omar was not the only one from the faux Fox account to gain much traction online; prior to that it also pushed the false claim that Supreme Court Justice Ruth Bader Ginsburg was “in critical condition”: 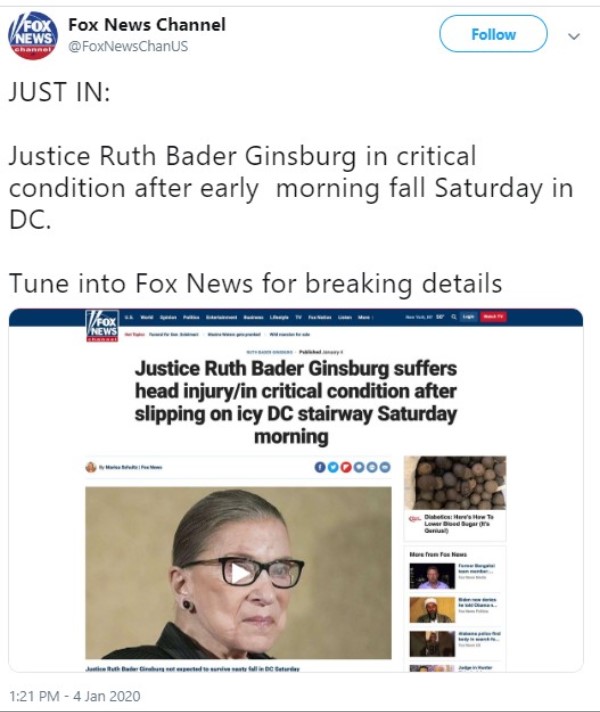 It also engaged in fearmongering, with a tweet claiming (again, falsely) that Iran had launched a nuclear missle against Israel: 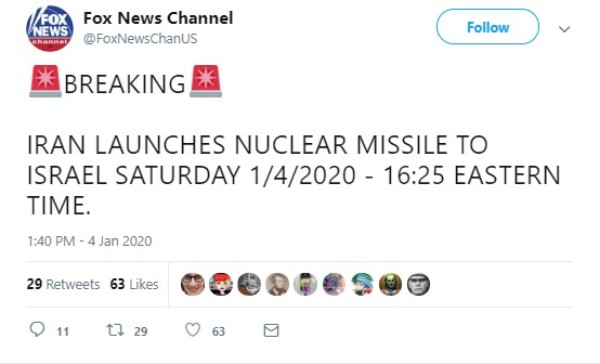 Omar has been a target for right-wing aggression throughout her congressional career; as the Washington Post has recounted:

Omar was elected to Congress in 2018 and, as a practicing Muslim, was sworn in on the Quran in January 2019. In short order, a right-wing social-media meme emerged falsely claiming that she’d committed treason in doing so. Over the months that followed, Omar was subject to a wide range of baseless claims, many of which pivoted from her history as a refugee from Africa.

During his one term in office, GOP President Donald Trump also seized on Omar as a focal point for dogwhistle attacks:

By the 2020 presidential contest, the attacks involved little more than invoking Omar’s name. No other context was needed.

On February 2 2023, the GOP — now in control of the House of Representatives — escalated its attacks against Omar, voting her off of the House Foreign Affairs Committee citing ginned-up claims of “anti-semitism.”

“Who gets to be an American? What opinions do you have to have to be counted as American? That is what this debate is about,” Omar said in her defense. “There is this idea that you are suspect if you are an immigrant. Or if you are from a certain part of the world, of a certain skin tone or a Muslim.”