On August 17 2022, former CIA Director Gen. Michael Hayden retweeted and agreed with the following statement: "I’ve covered extremism and violent ideologies around the world over my career. Have never come across a political force more nihilistic, dangerous & contemptible than today’s Republicans. Nothing close." 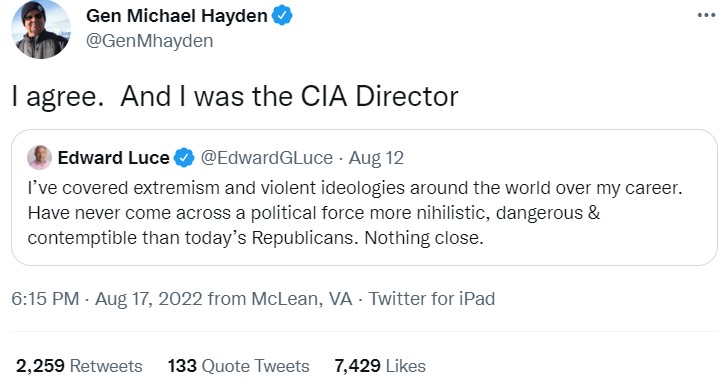 In the screenshot shared to Imgur, Gen. Hayden appeared to retweet an observation by Financial Times editor Edward Luce.

I’ve covered extremism and violent ideologies around the world over my career. Have never come across a political force more nihilistic, dangerous & contemptible than today’s Republicans. Nothing close.

I agree.  And I was the CIA Director.

An out-of-date page on the website of the United States Air Force provided a biography for Hayden, who served as Director of the CIA from 2006 through 2009, and who was appointed by Republican President George W. Bush:

On July 1, 2008, Hayden retired from the Air Force after over 41 years of service, while continuing to serve as Director of the CIA until February 12, 2009.

On Imgur, some commenters on the thread reacted to the sentiments from the purported source, a former head of the CIA. Others expressed discomfort around the unvarnished sentiment and uncharacteristic candor from an individual associated with a taciturn institution:

“When the former director of the fucking CIA says you’re too fascist… HOLY FUCK!”

“Reminder: he is the first man to ever head both the CIA AND the NSA! Of all the proper people, he knows.”

“This, moreso than other posts, gives me chills and a sense of foreboding. Talk to those on the fence voting. And VOTE.”

“We will not be able to say that we were not warned[.]”

“Not to be that guy be we are approaching nazi level here[.]”

“There’s too much dicking about and not enough action being taken to stomp this movement out, America is sleepwalking into real trouble.”

At least one commenter asked whether the screenshot (for which no link was included alongside the post) was real. It was, tweeted from Hayden’s verified Twitter account on August 17 2022:

I agree. And I was the CIA Director https://t.co/LRAHDDyy4n

As of August 18 2022, Hayden had been reacting to and engaging in discussions about the above tweet. Tweets by Hayden himself tended to be concise (such as “Yep,”) but he often retweeted longer commentary:

Thank you for continuing to serve your country when it is in clear and present danger, @GenMhayden . I know the times are taxing for you, and still you make your voice heard.
Patriotism is not dead yet.

Thank you for always speaking the truth, General! Your voice is so appreciated.

Hayden once stepped in to clarify which agencies he headed, and by whom he had been appointed:

that’s right. But for NSA it was a democrat. https://t.co/L43j0OAETl

A popular August 17 2022 Imgur post suggested former CIA Director Gen. Michael Hayden (a George W. Bush appointee) retweeted an editor’s commentary that he’d “never come across a political force more nihilistic, dangerous & contemptible than today’s Republicans.” In response, Hayden stated: “I agree. And I was the CIA Director.” The tweet (though unlinked) was real, and Hayden participated in subsequent discussions about it on Twitter. Finally, Hayden retweeted the assessments of others that his commentary was noteworthy.