Gilbert Gottfried described Donald Trump as "Hitler without the warmth." 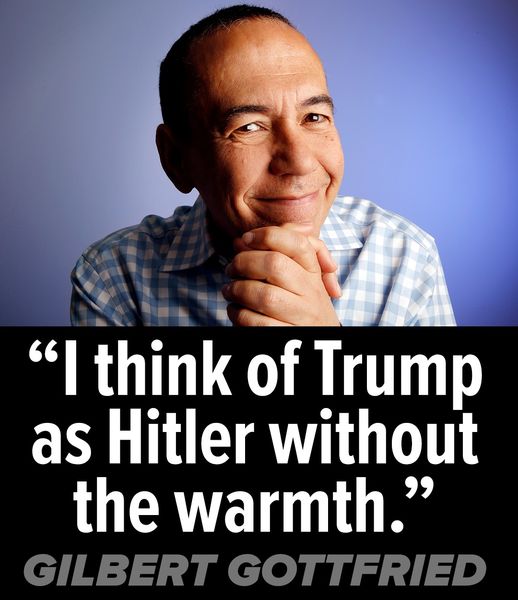 That post wasn’t the only piece of Trump-related content involving Gottfried in circulation after Gottfried’s April 12 2022 death. A popular tweet published on that date featured an undated photograph of Gottfried mocking Trump:

An April 13 2022 New York Times obituary for Gottfried made no reference to Trump by name, nor the quote in the Imgur meme. Titled “Only Gilbert Gottfried Could Be So Dirty and So Heartbreaking,” its first few paragraphs included a brief anecdote involving one of Trump’s television shows. That passing reference was unspecific, but included similar themes:

Some comedians unfurl yarns in the unhurried mode of a jam band, others display the taut rhythms of pop or hip-hop. Gilbert Gottfried, who came of age in a fraught New York City and died on [April 12 2022] at 67, always felt like punk in the classic CBGB mold: nervy, artful, deceivingly intelligent, a tad unhinged, and blissfully — beautifully — obnoxious.

The juiciest moments of his decades onstage crackle with impish grandeur. Some bits are renowned, especially his appearance at a Friars Club roast in the weeks after the World Trade Center attacks, where he dared crack a 9/11 joke. Greeted with boos, the comic pivoted to a standard bit known as “The Aristocrats.” It proved so dementedly randy, in his giddy telling, that it seemed to levitate the crowd, Gottfried’s potty mouth momentarily washing away the tension and grief.

Other times, he brought opportune lightning bolts to dopey TV fare. In one notorious clip from “Celebrity Apprentice,” the silky host tells the comedian, “Gilbert, I’m proud of you.” Gottfried stares down his latest mark. “Thank you, mein Führer,” he responds, characteristically more concerned about landing his joke than his odds in that season’s competition.

The quote attributed to Gottfried also appeared in an April 12 2022 tweet memorializing the comedian (alongside the viral image of Trump and Gottfried):

Many years ago, young Gilbert Gottfried was asked about Donald Trump at a New Yawk gathering and said Trump was 'Hitler Without The Warmth'. #RIPGilbertGottfried pic.twitter.com/zQ7tw1o52Y

We finally tracked down a March 17 2016 Huffington Post article (“Comedian Gilbert Gottfried Says Trump Is ‘Hitler Without The Warmth,'”) published prior to Trump’s election and presidency. It began:

“I think of Trump as Hitler without the warmth,” [Gottfried] laughed.

Gottfried, who stopped by HuffPost Live to dish on his podcast, said otherwise the Trump-Hitler comparisons aren’t too off base. He remembered a Trump rally from earlier this month [March 2016] where his supporters raised their hands and vowed to vote Trump — a sight that was called out for being reminiscent of Nazi events. More recently, a Trump supporter was photographed while giving what appeared to be a Nazi salute amid protests in Chicago.

“I saw recently that he was having the audience take an oath where everyone was raising their hand and I thought, ‘I think I’ve seen this before on The History Channel,” he said.

After Gottfried’s April 12 2022 death, a quote meme indicating the comedian said he thought “of Trump as Hitler without the warmth” spread on social media, without information about the context. According to a March 2017 Huffington Post piece, Gottfried made the observation during a visit to the outlet in March 2016, well before Trump was elected president. Gottfried elaborated, citing then-recent incidents at Trump rallies and reports of an “oath” at one such event.