AriZona Iced Tea co-founder Don Vultaggio said of its long-unchanged 99-cent price tag that "consumers don't need another price increase from a guy like me."

On April 18 2022, a popular Facebook post from “The Other 98%,” concerning AriZona Iced Tea’s unchanging price tag (USD$0.99) and ongoing discourse regarding inflation, was shared to Imgur: 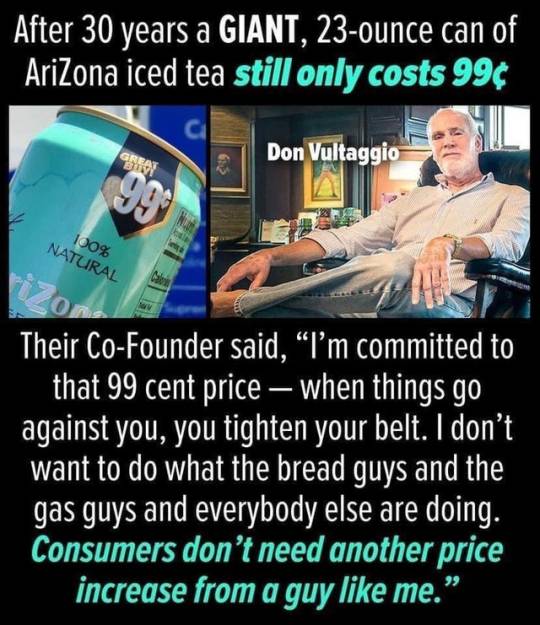 After 30 years a GIANT, 23-ounce can of AriZona iced tea still only costs 99¢

Their Co-Founder said, “I’m committed to that 99 cent price — when things go against you, you tighten your belt. I don’t want to do what the bread guys and the gas guys and everybody else are doing. Consumers don’t need another price increase from a guy like me.”

The bottom portion of the meme with the quote referenced ongoing discussions in 2022 about gas prices and whether inflation was partly influenced by corporate greed. The Facebook post and meme itself didn’t provide a source for its claims.

“Consumers don’t need another price increase from a guy like me.” https://t.co/H4lFRQFja7 via @MorningBrew

It linked to a Los Angeles Times article, titled “As inflation soars, how is AriZona iced tea still 99 cents?” The quote in the meme appeared in that report after a few paragraphs describing overall increasing costs for consumers in 2022.

The story further described how the company was affected by inflation, “tak[ing] a haircut” in that respect. It opened with relative higher costs for staples such as bread and gas, continuing:

… But a giant 23-ounce can of AriZona iced tea still costs 99 cents, the same price it has been since it hit the market 30 years ago. Today, that’s cheaper than most bottled water, 20-ounce sodas, iced teas and canned coffees on the market. If you could fill your car up with cans of AriZona Green Tea with Ginseng and Honey, it would be cheaper than L.A. gas by nearly 40 cents a gallon.

How does AriZona pull this off while everything else goes up? The price of aluminum has doubled in the last 18 months. The price of high fructose corn syrup has tripled since 2000. Gas prices are pumping up delivery costs. One 1992 dollar, adjusted for inflation, is worth two 2022 dollars. But the 99-cent Big AZ Can, as the company calls it, persists.

The short answer: the company is making less money. The big cans are still profitable, but for the moment, they’re much less so than a few years ago.

Don Vultaggio, the 70-year-old, 6-foot-8 founder and chairman of the company, is choosing to take a haircut in order to keep the price flat and cans moving.

“I’m committed to that 99-cent price — when things go against you, you tighten your belt,” Vultaggio said on a Zoom call in early April from his headquarters on Long Island, N.Y. Even though his costs are higher, “I don’t want to do what the bread guys and the gas guys and everybody else are doing,” Vultaggio said. “Consumers don’t need another price increase from a guy like me.”

Thirty years ago, a gallon of milk cost around $2.78, a gallon of gas would set you back $1.13 on average, and a 23-ounce can of AriZona iced tea was 99 cents. This year, a gallon of whole milk is around $4.02, the national average for that gallon of gas is $4.11, and a 23-ounce can of AriZona iced tea is…still 99 cents … Vultaggio told the Times that the company sells around one billion-with-a-B of those 99 cent cans every year, and they account for around one-quarter of the company’s total revenue. The company started to print the 99 cent price on its cans in 1996, and that’s become part of AriZona’s now-iconic design.

That outlet dug up a quote from Vultaggio in 2016, talking about the company’s allocation of resources and strategies to ensure costs weren’t passed on to consumers:

For starters, AriZona doesn’t blow its money on advertisements or marketing campaigns. “We feel like it’s more important to spend money on something that our customer really cares about, instead of buying billboards or putting our cans in the hands of some celebrity for a few minutes,” Vultaggio told Thrillist in 2016.

He also said that new production methods and using recycled materials allowed the company to use 40 percent less aluminum in its cans, and its trucks drive its products at night to cut down on time spent in traffic and to burn less fuel. “It’s really about working smarter,” he added.

A popular meme claimed AriZona Iced Tea’s co-founder Don Vultaggio said the company refused to raise the 99 cent price of its ubiquitous product, and that it wouldn’t do “what the bread guys and the gas guys and everybody else” did. That quote was sourced from an April 14 2022 Los Angeles Times profile, in which Vultaggio expressed the sentiment attributed to him. The meme was accurate, and the quote was correctly attributed.