In late October 2018, just days after a gunman — reportedly encouraged by racist political  rhetoric — slaughtered eleven people during a service at Pittsburgh’s Tree of Life synagogue, Connecticut’s Republican candidate for a state senate seat sent out a flyer that showed his Democratic opponent Rep. Matthew Lesser (who is Jewish) grinning over a fistful of cash: 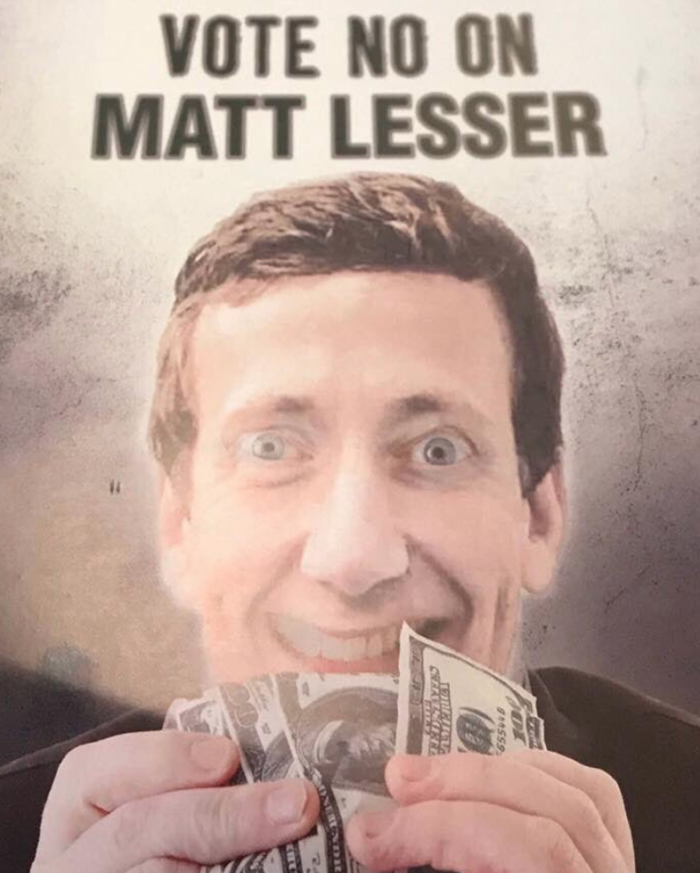 The tagline read: “Matt Lesser will take everything you worked for.” It also appears as though his face was digitally changed:

Lesser told The Washington Post that he was incredulous when he first heard of the issue from some people in the district, which includes Middletown.

“I did not believe them, because we live in America,” he said. “I assumed it was some sort of mistake or misunderstanding.”

He said that his likeness had been photoshopped significantly in the mailer, raising further questions about his opponent’s aim. In addition to the hands grabbing $100 bills that were added to the picture, Lesser’s face has been altered with a smile and a crooked look in his eyes, he said.

“When I look at that I don’t see Jewish,” State Republican Chairman J.R. Romano told the Hartfort Courant:

“That’s all this is, pointing out the fact that Matt Lesser is a tax-and-spend Democrat. If you criticize any Democrat for failures and their record, they run into this shield that you’re a racist. The Democrats have false outrage all the time.”

When told that Jewish community members raised objections to the mailer, Romano said, “Did you look to see their political affiliation?”

By Halloween, however, the outrage became too much for Connecticut’s once-defiant Republican candidate to ignore. Republican contender Ed Charamut finally apologized in writing to Lesser:

“However, it is clear now that the imagery could be interpreted as anti-Semitic,” the campaign said in a statement emailed to reporters. “And for that we deeply apologize as hate speech of any kind does not belong in our society and especially not in our politics.”

“I reached out and talked to several friends and Republicans who are Jewish,” he said Wednesday in an interview. “In the course of the day, I reached a broader understanding of the history and context.”

Lesser says he has not heard directly from Charamut or anyone in Charamut’s campaign.