A photograph showing a helicopter being used to de-ice a wind turbine was taken during the Texas winter storm of February 2021.

The scramble by right-wing politicians and pundits to spread disinformation amid the winter storms devastating Texas in February 2021 led to a long-debunked graphic finding new life online — again.

The photograph shows a helicopter hovering near a wind turbine with ice on it, with water spraying onto the turbine. In one post circulating on Facebook, the caption reads:

A helicopter running on fossil fuel spraying a chemical made from fossil fuels onto a wind turbine made with fossils fuels during an ice storm is awesome. 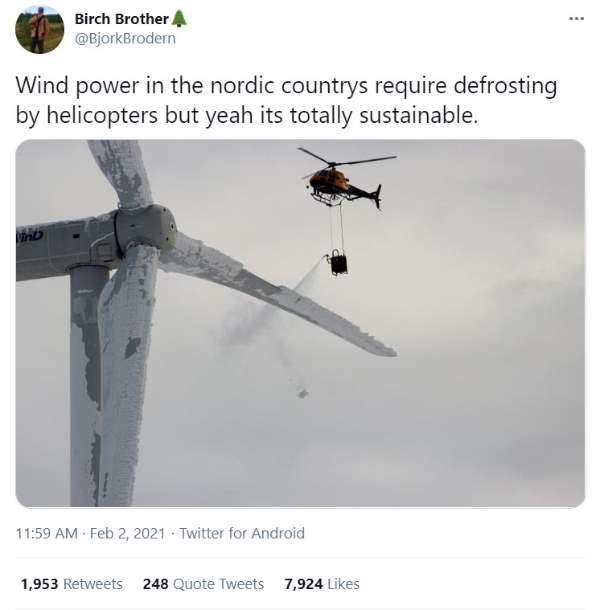 The meme insinuates, falsely, that the photograph was taken during the recent storm. As Associated Press reported, another version of the post attempts to link the photo more explicitly to the ongoing disaster with the caption, “Green new deal. Praying for Texas,” referencing a set of environmentally-friendly policies that have not been passed into law anywhere in the United States, let alone in Texas.

Again, this is a false association. As Earther reported, the photograph of the helicopter was actually taken in 2015 and later referenced by the Swedish company Alpine Helicopters on methods for de-icing wind turbines:

The project relied on spraying turbines with hot water scooped up from a boiler truck on the ground in temperatures as low as minus-4 degrees Fahrenheit (minus-20 degrees Celsius). The goal was to be cost-effective and relatively quick. Though [the company’s] report doesn’t include the image, a company slide deck as well as [an] article about the process does.

The photograph specifically appears in a slide titled “Simple solution,” alongside the caption:

The Helicopter lifts the water tank, flies to a position close to the blade. The water is then sprayed onto the blades and removes the ice in same way as when de-icing an aircraft. 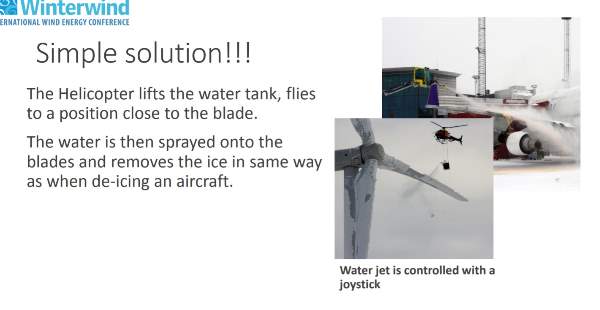 The company further confirmed to that the photo was originally taken in 2014. In 2016, author and tech analyst Ketan Joshi debunked Australian lawmaker Craig Kelly’s claim that the turbine would not be able to compensate for emissions generated by the helicopter, a claim that gained online traction with the Australian and global right that year, as well:

Joshi also noted that Jones neglected to mention that the wind farm in the original photograph was slated to receive thirty new turbines with de-icing mechanisms already installed in their blades. He also pointed out the deceptive nature of posts trying to link the photo with the storms in Texas.

“This is a straight up lie that’s guaranteed to go viral (whether it’s from climate deniers or from people who think you can just reduce demand),” he wrote on Twitter.

This is a straight up lie that's guaranteed to go viral (whether it's from climate deniers or from people who think you can just reduce demand). The pic is from a test of a helicopter de-icing system in 2016; modern turbines in sub zero climates have in-built de-icing systems. https://t.co/vd154VssGy pic.twitter.com/vezMmcL99t

The bogus claim has also been debunked by Reuters. Despite that, however, several variations on the post and claim are — as usual — still visible on Facebook: 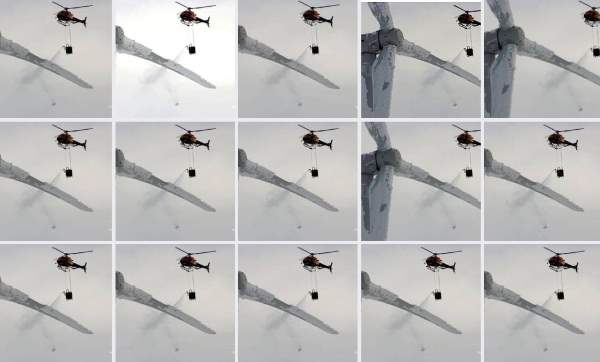 At least 21 deaths have been linked to the severe winter weather across Texas and several other U.S. states. According to the utility data aggregation site poweroutage.us, more than 2.6 million Texas residents remained without power as of the afternoon of February 17 2021.

But the speed of response to the situation was outpaced by right-wing efforts to falsely blame it on renewable energy rather than the collapse of the state’s privately-managed utility system. As the Houston Chronicle reported:

The Texas power grid, powered largely by wind and natural gas, is relatively well equipped to handle the state’s hot and humid summers when demand for power soars. But unlike blistering summers, the severe winter weather delivered a crippling blow to power production, cutting supplies as the falling temperatures increased demand.

Republican Gov. Greg Abbott has attempted to lay blame for the crisis on two different sources, depending on his audience and unintentionally demonstrating how insidious disinformation campaigns can be.

In interviews with local news outlets, Abbott has criticized the Electric Reliability Council of Texas (ERCOT), which operates the grid, for a lack of transparency while also calling for the state legislature to investigate the utility breakdown. But the governor has also tried to blame solar and wind power in separate interviews with right-wing media networks:

WFAA-TV reported that, according to ERCOT itself, “natural gas, coal or nuclear facilities” made up most of the plants that went down as a result of the sustained storm:

#BREAKING:@ERCOT_ISO says most of the electric generating plants that went off-line last night were natural gas, coal or nuclear facilities that shut down.

Combined, that took more than 30,000 megawatts from the grid — leading to the rotating outages.#txwx

Earther also reported that political action committees for both Abbott and his Lieutenant Governor Dan Patrick have been beneficiaries of generous donations from fossil fuel companies:

Syed Javaid Anwar, the CEO of Midland Energy, was Abbott’s top donor between 2019 and 2020, giving a total of $1,617,500 to his PAC. The CEO also gave generously to Patrick, kicking his PAC just under $250,000 over that same time period. Douglas Scharbauer, an heir to a West Texas oil, ranching, and race horse fortune, gave a total of $350,000 to the lieutenant governor’s PAC in 2019, while another oil heir, Ray Lee Hunt, also pitched in generously with donations of $500,000 to the PACs of Abbott and $250,000 to Patrick. (Hunt also gave more than $63,000 to Cornyn’s PAC.) Not to be outdone, Kelcy Warren, CEO of Energy Transfer Partners, kicked $500,000 to Abbott’s PAC and $200,000 to Patrick’s in the same time period. Warren’s firm is behind the Dakota Access Pipeline, and he has said talking about the pipeline is “like talking about my son.”

Even as ERCOT’s structure enables it to avoid federal regulation, Abbott went further in protecting the oil and gas industries shortly after the election of United States President Joe Biden in January 2021; the governor signed an exectutive order allowing state agencies to challenge any alleged federal “overreach.”