Rumors that the activist hacker group plans to hold a “Day of Rage” on July 15 have gone viral.
The Truth:
There’s no truth to rumors that Anonymous plans to hold nationwide “Day of Rage” protests on July 15, 2016.
The rumor started with a video posted by someone using the handle “TheAnonMessage” who claims to be affiliated with the group. The video begins by showing the police shootings of Alton Sterling and Philandro Castile. Then, a narrator continues:

We are calling on a collective day of rage. A day of action centered around civil disobedience and the right to protest.

To police departments across the United States. We are not your enemy. However, it is in your hands if you want us to stay that way or not. We will not be silenced and we will not be intimidated.

To the St. Anthony and the Baton Rouge Police Departments, we’ve already launched attacks on your virtual infrastructure. We are prepared to release every single piece of evidence that will expose your corruption and blatant disregard for human life.

Once again we are calling upon the citizens of the United States, in conjunction with the Black Lives Matter movement as well as other civil rights activists, to participate in a day of action against the injustices of corrupt officers. On Friday, July 15th, we will all flood the streets at strategic locations in order to maximize our voice. The locations and times will be located in the description below. Tell your family, tell your friends. We will change the world together. Our freedom depends on it.

The video sparked rumors and even warnings from blog sites to not be in certain cities at specific times because Day of Rage protests had been planned there (even though no dates or events were listed in the video or elsewhere), which fueled a sense of panic.
In reality, however, an official Anonymous Twitter account tweeted that there’s no Day of Rage planned by the group, and that the account that posted the video, TheAnonMessage, has been behind hoaxes like this one before: 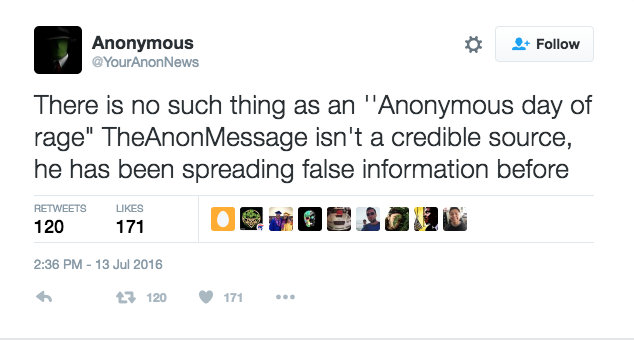 TheAnonMessage was also behind a viral video that called for a Day of Rage on August 14, 2014, in response to police in Ferguson, Missouri, killing Michael Brown. That video generated a lot of attention, but nationwide protests supposedly organized by the hacker group never took place.
Anonymous doesn’t have formal leadership or an official roster of members. The group is a loose affiliation of hackers that have common views and rally behind common social causes. Because the group has, “A very loose and decentralized command structure that operates on ideas rather than directives,” it’s easy for people to use the group’s name and recognition to spread false rumors like Day of Rage 2016.